This summer Tough Mudder will be launching a new series, Urban Mudder (http://urbanmudder.com/), and they are bringing the event to New York on July 25 to showcase what they hope will be a complementary product to their successful Tough Mudder events (not races, but “challenges”, as they will remind you). Some obstacle course events are designed to make racers feel they are going through basic training (like the Ultimate Challenge Mud Run http://www.ultimatechallengemudrun.org/). Others make them feel like they’re at a really long outdoor CrossFit workout (Spartan Race: http://www.spartanrace.com/). A couple make you think you’ve wandered into a Japanese TV game show (Wipe Out Run http://wipeoutrun.com). Urban Mudder will make you think you’ve morphed into an action hero.

How does Urban Mudder differ from Tough Mudder? Tough Mudder HQ wanted to develop something that would have the same spirit and promote the same values as the Tough Mudders (think “life changing unconventional experiences” focusing on teamwork), but that would be more accessible. The regular Tough Mudder events require lots of space, which means hosting them close to cities can be difficult. The logistics of getting to the event can be as challenging as the obstacles themselves, and as a car-less Manhattanite, I can only thank TMHQ for the location they chose; I will be able to walk to the event site from my apartment, quite a luxury in the world of obstacle course racing. The course will also be shorter, about five miles, compared with an average length of twelve miles for the Tough Mudder. Between the shortened travel time and the shorter course, this means that an Urban Mudder is something you could do on a weekend morning, rather than having to coordinate your entire weekend around the event.

Thanks to the urban setting, the course will leave Urban Mudders much cleaner than Tough Mudders. The obstacles are all new, but they retain a certain fiendish cleverness that is a hallmark of TMHQ’s obstacle innovation team. Some will be a little familiar, such as an updated version of the Funky Monkey, but others are clearly designed to make you think you are an action hero. Ever wanted to be the cop chasing a bad guy up fire escapes and over rooftops? Or perhaps the bad guy getting chased? Welcome to the Rooftop Series (https://youtu.be/ka5IyWphi7g), which will have you climbing up and jumping off walls onto enormous crashpads. Ever wanted to take part in a heist, the kind where the jewels are protected by glowing laser beams? Your fantasy gets fulfilled in Laser Minefield (https://youtu.be/EZmG95xDIhk). I’m pretty sure I saw Catherine Zeta-Jones do that in a movie, once. Other obstacles are inspired by parkour (Six Feet Over, https://youtu.be/EeUQ0rVkDD8) and the big top (Circus Training: https://youtu.be/bptO8BN3Bn8).

I expect it’s no coincidence that these sort of wish-fulfillment obstacles are at an event whose charity partner is the Make a Wish Foundation (http://wish.org/). Whereas for Tough Mudders, the company had partnered with the Wounded Warrior Project (https://toughmudder.com/wounded-warrior-project), the tone for Urban Mudder will be slightly different, as TMHQ works with the local chapters of the Make a Wish Foundation: a little less macho, a little less flag-waving, and with more emphasis on changing lives.

When can you expect to see Urban Mudder near you if you don’t live in New York? Their website has a list of cities where pre-registration is under way, but according to Ashley Ellefson, Tough Mudder’s VP of New Event Development (also TM’s first hire), we can expect to see Urban Mudders throughout North America and beyond in 2016. The videos of the obstacles were taken last year at a beta test of sorts in California, and I expect that there will be changes made as the event gets bigger.

I’m looking forward to an event that’s close to home, featuring unfamiliar (and crazy) obstacles, and one that won’t have me cleaning dirt out of my ears for days afterwards. The wizards at TMHQ have proven that they can roll out new obstacles and stage large scale events at new venues every year. It should be entertaining to see how they fare with a smaller, cleaner event. 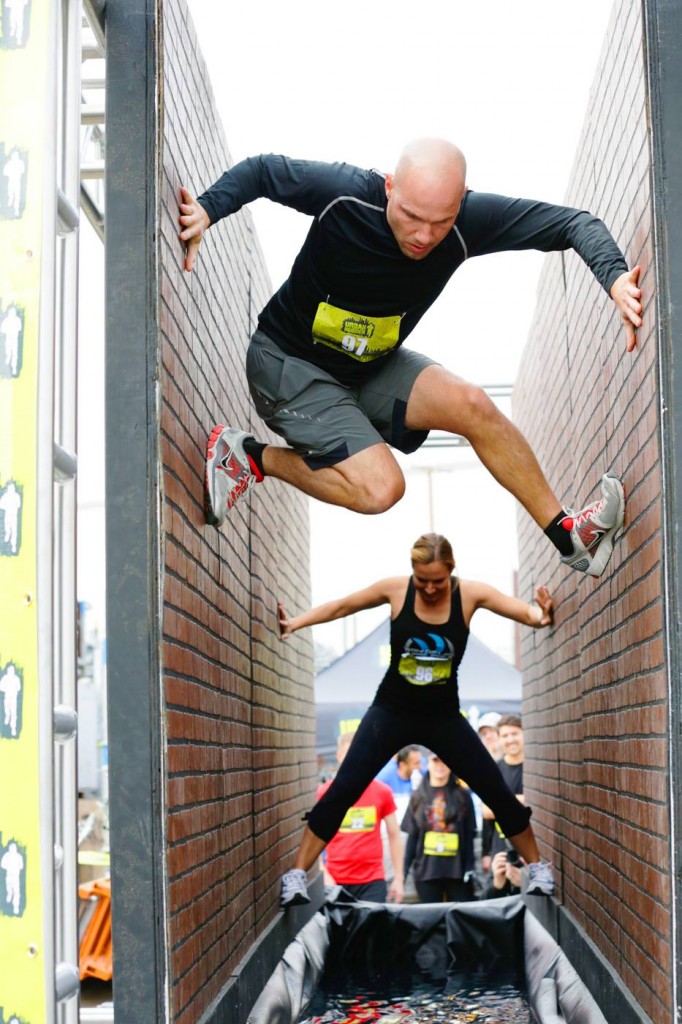