CNBC’s one-hour documentary “The New High: Extreme Sports,” reported by CNBC’s Carl Quintanilla and premiers on Thursday, June 18th at 10PM ET/PT. It features obstacle course racer Amelia Boone and Spartan Race creator Joe De Sena.  The documentary explores how the extreme has become mainstream in just the past few years as entirely new sports have been invented as more and more money, time and passion have been pumped into a rapidly developing industry.

CNBC speaks with 31-year-old Amelia Boone who by day is a bankruptcy attorney in Chicago, but on weekends, she sheds her corporate skin and competes as one of the best obstacle course racers in the world. Her drive to win is extreme: just eight weeks after undergoing knee surgery, Boone ran in a 24-hour long race, covering 75 miles and winning the women’s division.  CNBC cameras cover Boone in action at “The Spartan Beast,” a 12.5 mile race in New Jersey where competitors trudge 4,800 feet up muddy ski slopes and tackle 32 obstacles.

It’s not always pretty
What does it take to be one of the best obstacle course racers in the world? For Amelia Boone, it’s a desire that borders on obsession. 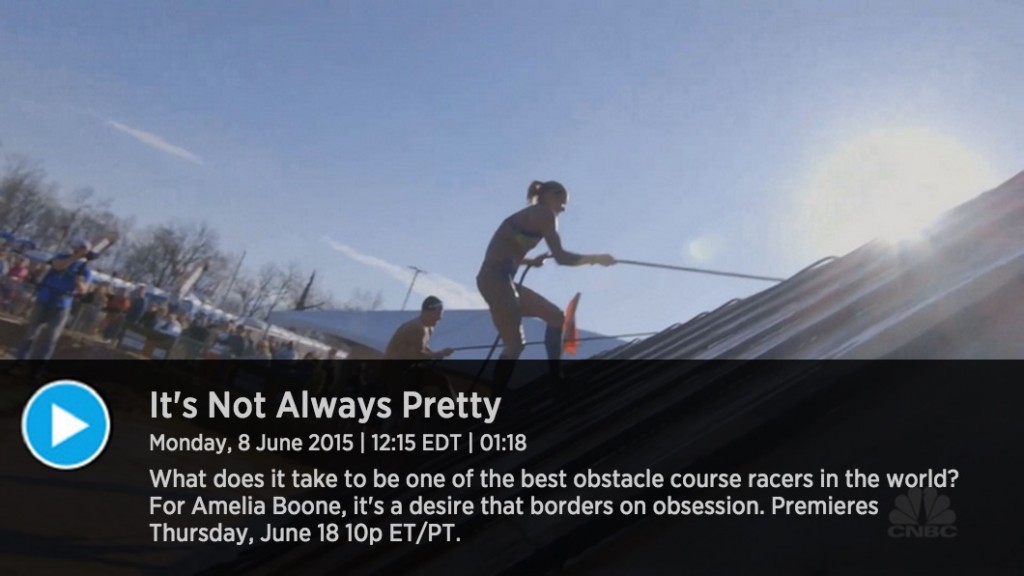 From flying off a mountain in a “wingsuit” to nailing a triple back motorcycle flip to kiteboarding 40 feet in the air, CNBC explores the soaring popularity of extreme sports.  In just the past few years, entirely new sports have been invented, millions of dollars have been pumped into this huge and growing industry, and what was once extreme is now mainstream.  These action adventures are no longer the domain of elite athletes. Now, a nation of weekend warriors is diving into the mud, scaling new peaks, and riding the waves. These enthusiasts are tapping into a common fantasy of escaping their dull office routines and transforming themselves, even for a moment, into superheroes.

Correspondent Carl Quintanilla takes a helicopter ride to the top of Notch Peak in Utah, where wingsuit jumpers sponsored by GoPro take off from 9,000 feet. Quintanilla also travels to Hawaii, where venture capitalists and entrepreneurs, brought together by a passion for kiteboarding, broker million dollar deals.  If extreme sports has a hero, it’s Travis Pastrana, X-Games legend and now ringleader of the enormously popular arena show, “Nitro Circus.” CNBC takes viewers behind the scenes at one of his high-octane performances.  Quintanilla also tackles the hot new sport of obstacle course racing and profiles its breakout star, Amelia Boone, who explains her winning strategy:  “Bring myself to that brink – and keep pushing.”

Jumping off a cliff at 9,000 feet
Three members of the GoPro Bomb Squad, Neil Amonson, Marshall Miller and Jesse Hall, wingsuit BASE jump off of Notch Peak, Utah. 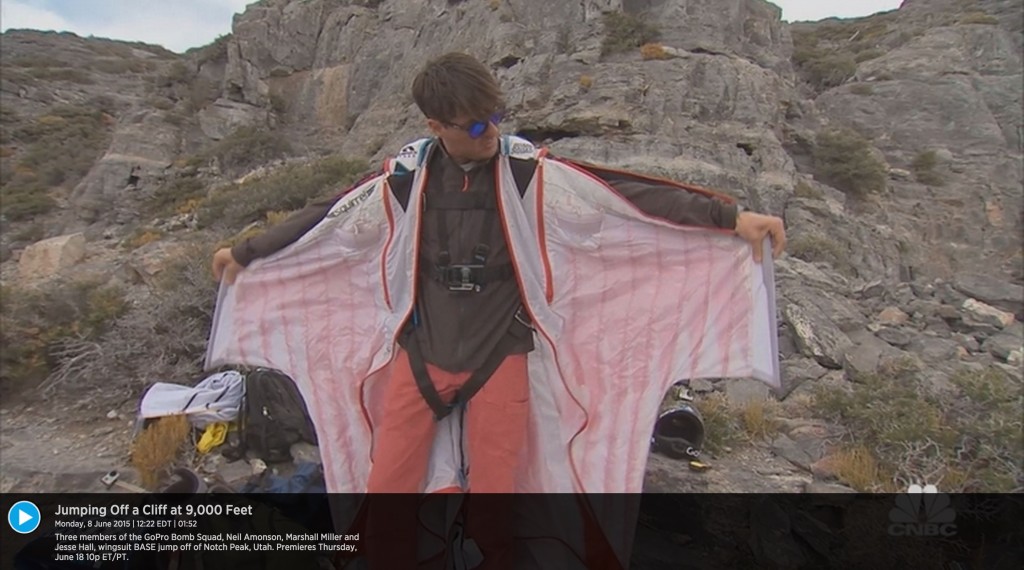 No Wusses Allowed in This Race:
Hundreds of racers compete in the Spartan Sprint in the Bahamas, including our correspondent, Carl Quintanilla. 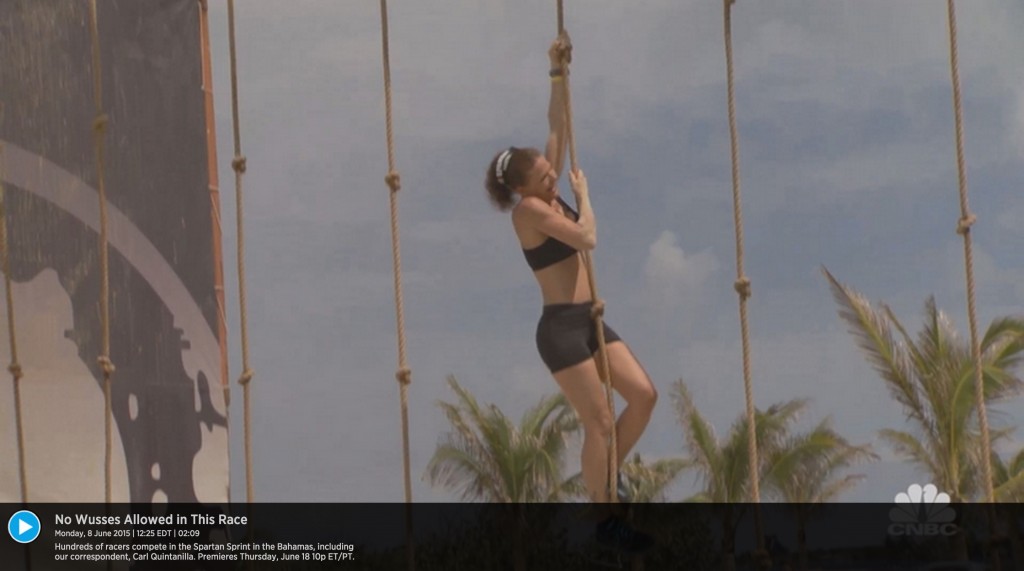 Apex Predator:
Don’t look back. April Dee, the top female Spartan Racer, has got you in her sights. 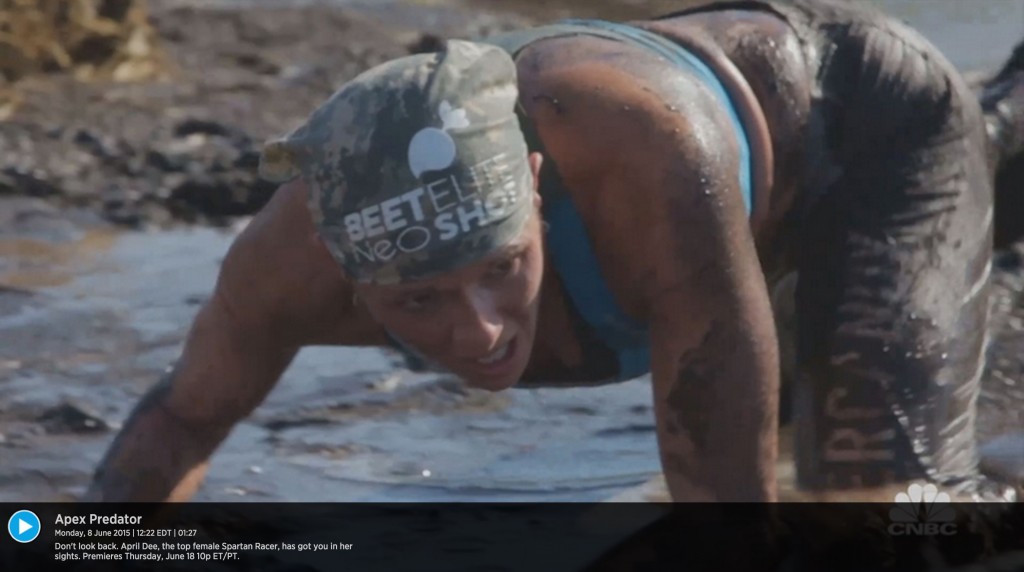 Weighing the Risks in BASE Jumping:
Members of the GoPro Bomb Squad discuss the risks in wingsuit BASE jumping. 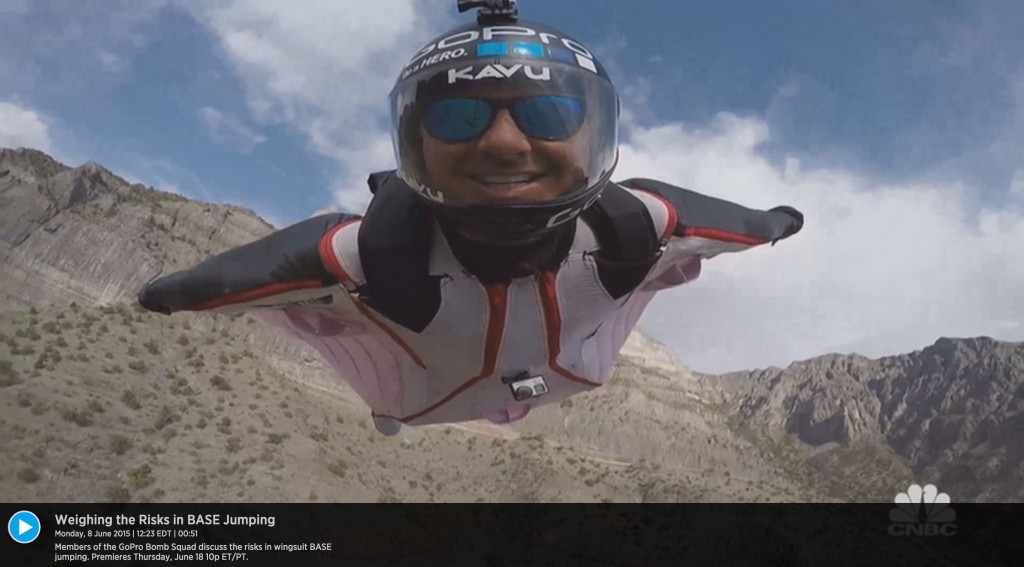 Be the Golf Ball
When it comes to his Nitro Circus, Travis Pastrana has just one rule: if it has wheels, it must fly. 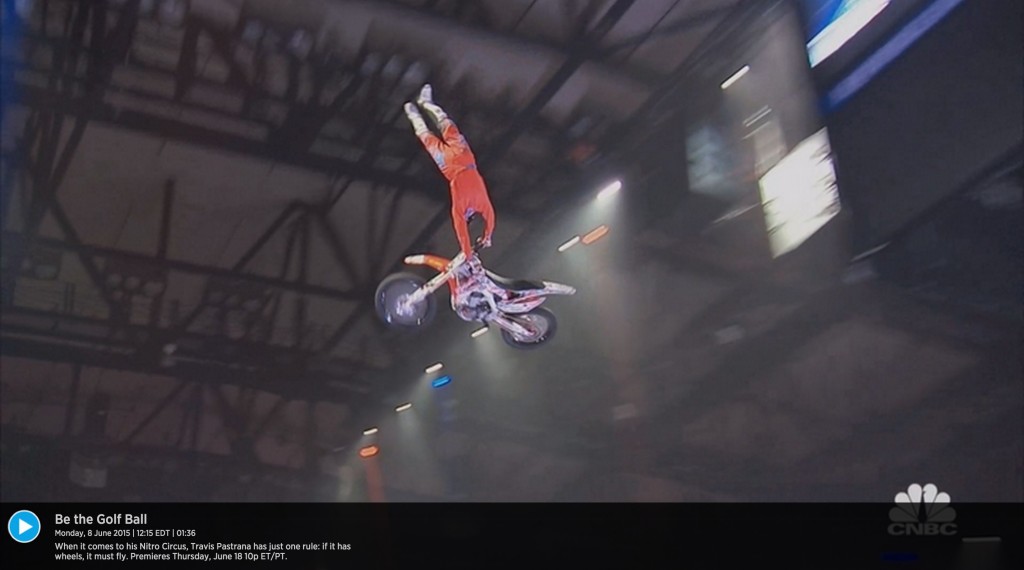