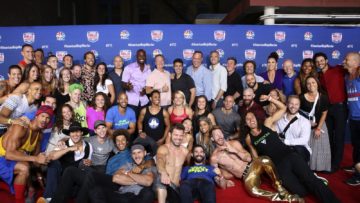 A revealing interview with one of the producers of American Ninja Warrior, who shares some thoughts behind topics like how they design the course hoping for a certain percentage to pass, how they decide who gets air time and who doesn’t, how they pick people to return, and much more.

Interesting stories. Stories that are relatable to the audience play a key part in that. It’s a combination of those. We juggle all types. It’s not easy. We have 120 people who run [in each Qualifying city], and we can only fit about 10 runs an hour. 20 people on the show plus the fast forwards. It’s brutal.

It’s a shame but we’ve had people who’ve run the course maybe three times and have not been on the air yet. Either their story isn’t unique enough or they fall on the third obstacle and it’s not that interesting. They don’t have any fans. There’s not much to go on. Not much content. Not much meat of the story.

One of the things we’re trying to work out with NBC is to be able to post those runs on the Internet, so everyone can show their friends at least. It’s just very time consuming. We’re hatching a plan to try to come up with a way to service those people who don’t make it on the air.