This recap is an extension of my previous review from the November 2014 Goliathon event. If you’re unfamiliar with what Goliathon is, please read that article here first so that you have basic understanding of the event. Goliathon is not your traditional obstacle course race, so some background knowledge is necessary to fully understand this article.

The November Goliathon event which was made additionally challenging due to the freezing rain, the May event was the polar opposite with blistering heat. Although the weather never seems to want to fully cooperate with Goliathon, it never makes it any less enjoyable. This time running the course in reverse, as well as, doing some obstacles in reverse, added enough variation that the event that it did not feel rehashed even though it was at the same location.

One of the most notable obstacles was the G3 Rope Cross. This was a typical rope traverse over a pond, however, to increase the difficulty, pvc pipes and broomsticks were woven into the rope. Which forced you to come off the rope at times to pass by them, greatly increasing the chances of your grip giving out. A G3 Half Dome peg wall was a new addition this year. Having done these in the past, I greatly underestimated the difficulty as well as how much my grip strength had diminished throughout the day. A set of G3 rings, on the obstacle Circus Maximus, were on a kinked rail (as opposed to in a straight line) was the downfall of many who lost swinging momentum and ended up in a perpetual spinning motion.
Not only were the obstacles well thought out and extremely fun, they were built to last. Everything felt secure and solid, there was never a question of their integrity. In addition, this event had the best volunteers I’ve ever seen. They were all well trained and very tuned into their jobs. This event heavily relies on volunteers to keep a tight hold on their obstacles to make sure that they are completed in their entirety.

The only criticisms I have of the event are not necessarily criticisms at all. Although the heat could not have been predicted, the water stations (which there were several) could have been placed better along the 4 mile course. We came to the first one 1/4 mile in, which seemed way too early. There were some backups at obstacles out in open fields which could have been prime areas to rehydrate. The wait times on some obstacles were long, just because they took a long time to complete. Again, I can’t really blame Goliathon for this since they created such great obstacles and released heats far enough apart that it spread everyone out as much as possible.

Team Mud and Adventure not only won the largest team, but was able to retain their position from last year, finishing in 2nd. This event personally brought me the highest sense of team pride as it is specifically designed to do. To succeed you either need to have serious ninja skills or the support of an encouraging group of people. Working as a team, you not only cheer each other on, but learn from each others mistakes and adjust your expectations accordingly. Goliathon’s final event this year will be October 3rd in Mullica Hill, NJ. 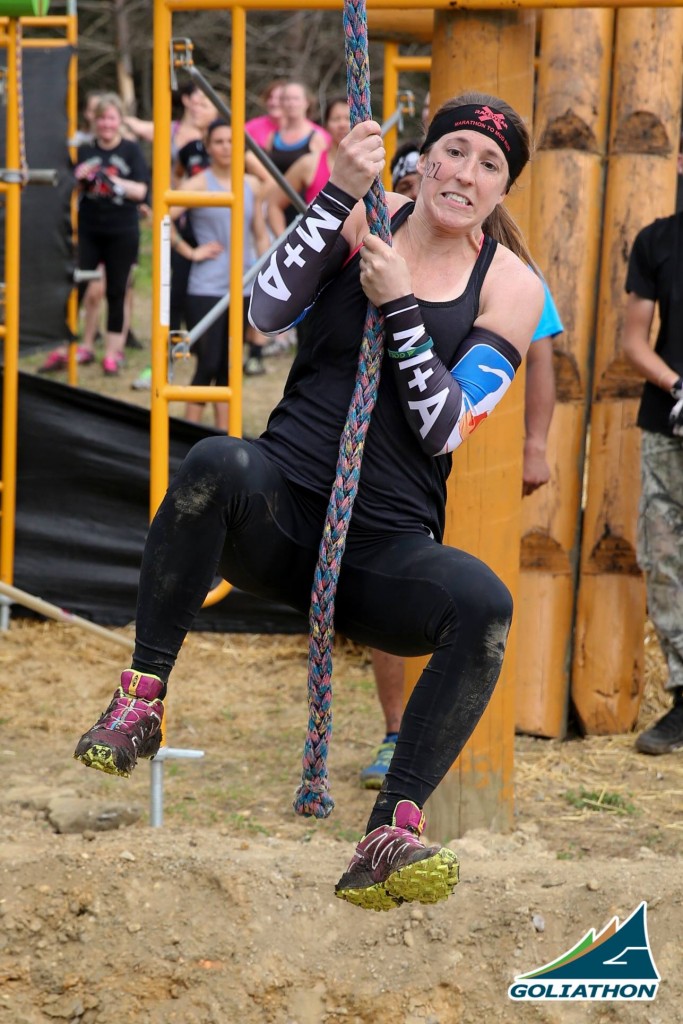