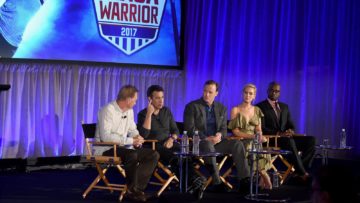 During NBC’s summer press day, the American Ninja Warriors host & producers held a panel where they talked about several aspects of the show. ANW Nation shares some of the highlights.

We received an invitation to crash the American Ninja Warrior panel. Which was super exciting because it meant we got to put on nice clothes and check out Los Angeles landmark, The Beverly Hilton. Generally, working with Ninjas requires a uniform of athletic gear at all times. In the afternoon, we heard from American Ninja Warrior executive producers Kent Weed and Arthur Smith, and hosts Matt Iseman, Kristine Leahy and Akbar Gbajabiamila. They talked about the upcoming season and took questions from reporters.

A word to the wise: Ninja Warriors lay out how to...