Do you love Tough Mudders but wish they were a little bit shorter? Do you wish your Warrior Dash last weekend was a little longer with bigger obstacles?  Are you tired of road races?  Are you looking for something that’s more than a 5k but nothing extreme like Tough Mudder or Spartan?  Do a Savage Race.  For me, there is no magic formula for obstacle course races when it comes to obstacles and distance, but when I stumbled upon Savage Race on Facebook, I knew I had to try it because it was different than all the rest.  It is roughly half the distance of Tough Mudders but nearly double a 5k OCR with the added bonus of larger obstacles.

I signed up for Savage Race in Maryland quite a while before the race was to take place on July 20, 2013, and I was most excited about this one of all this season.  I love trying out new race series, and this one did NOT disappoint.   Below I detail a few categories for you.

Easy.  Find your bib number, sign a waiver, find your bib number line, show ID and enter at your own risk!  Pretty easy set up.  No lines for the first waves.  I’m not sure how this faired for the later waves, though.

Prior to Savage Race Maryland, Savage Race sent out an email detailing the safety precautions the course design team had implemented in order to accommodate for the extreme heat wave that had settle down over the Mid-Atlantic Region throughout the week.  They changed the course lay out to be more in the woods and incorporated less open field running.  At the start, they required all participants to have on shirts in order to remain wet the entire run.  Though, this didn’t stop people from tossing the shirts once on the course.  I was asked if I felt okay and was checked on throughout the course.  They provided free cold bottles of water at the start before running (never seen this before), there were at least four water stations where they provided cold bottled water during the race, and, at the end, they provided a banana and a cold bottle of water.  They thoroughly made sure participants were hydrated and lessened the likelihood of heat sickness by changing the course to include more shade and more water.  I’m not sure anyone can really argue that.  Bravo for putting safety first.

Obstacles!  I’m like a kid in a candy store when it comes to obstacles.  The bigger, the better.  Always.  I don’t care what the obstacles may be.  Davy Jones’ Locker, Colossus (the ramp side and the slide side), Sawtooth, Thor’s Grundle and Nutt Smasher (Beware: Nutt Smasher comes with a 30 burpee penalty when you fall!) are all great obstacles.  I’m not afraid of heights or water, and I have been to more water parks than most, but I took about 10 seconds to jump onto the slide on the back side of Colossus.  It was intimidating, and that says a lot coming from a self-proclaimed adrenaline junkie who likes jumping out of airplanes!  I even, sadistically maybe, enjoyed the Tazed obstacles.  I was able to roll quickly through it, so when I was tazed, I didn’t eat the dirt like many do in Tough Mudder.   I just kept rolling because I was already on the ground!  Great choice on my part I thought.  Yes, it hurts.  That’s such a silly question!

The course was extremely challenging and fun (and not too hilly).  There were parts that went through natural water ponds, through woods, through shaded paths, down a gravel road for a short distance, through a cornfield (literally through the corn), and then the last stretch where some of the larger obstacles are located was exposed running.  They incorporated a nice variety of terrain, but due to the extreme heat, the course designers decided to cut down the length of the course to somewhere around 4 miles.  I wasn’t happy about this, but I know they did it in order to cut out the exposed running parts for safety, and for that, we are all grateful.  Overall, I just wish it would have been a little bit longer.  As for spectators, from what I saw while running, it looks as though many of the larger obstacles were in plain sight for spectators.  Always a plus when you bring supporters with you! 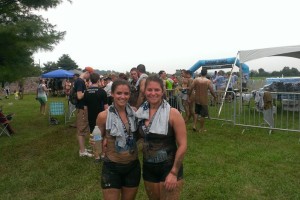 There were plenty of bathrooms on site, there was a tent with chairs and fans blowing water mist (I’m not sure this typical for Savage Race or just because we were in a heat wave that weekend), a gear check tent right beside the start line, and parking was convenient (but $10). There were no major lines for anything….nope, not even the beer tent!  The only issue was the showers were very far from main action.  It was literally across the parking lot on the other side of the venue beside Shriveled Richard.  I’m assuming, logistically, that’s just how they had to set the shower up since they needed water for them, but it would have been a solid 10 had there not been mass confusion by all those who were walking around all muddy on the actual course after finishing, with their beer in hand and their bags asking anyone in sight where the showers were located.  Though, since the showers were on the other side of the parking lot, it made it easy access to drop off your stuff before going back to the main event area. 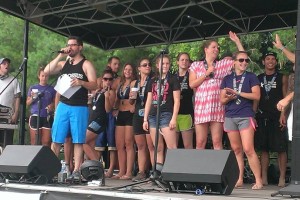 I appreciated the awards system Savage Race uses.  I have never competed in a race with the same setup.  Savage Race awards medals to the top three per age division and the overall top female and male.  While fully I believe the top female and male greatly deserve their awards, at least verbal recognition for the second and third place overall female and male would have been a nice gesture while on stage getting their age division medals.  I received a gold medal for being top in my age division, which was amazing!  But then I received no acknowledgement at all for coming in as the second female overall.  The ideal awards ceremony would have recognized me as being top in my age division and then mentioned that I was second female overall too.  Being awarded my medal on stage in front of the crowd made the scratched up knees worth it.  We all work very hard to get to the podium!

I’m assuming that being first out on the course during the elite wave is what lead to me having almost no pictures of me taken while racing.  This was the biggest disappointment of the day. Those who ran in the elite paid more for their registration, but then got no benefit from it when it comes to pictures (normally less crowding on the course means more quality pictures).  Also, they don’t separate pictures by bib number but by the time you reached the obstacle on the course.  I give it 5 points simply because they have pictures, and the organization of them is coherent, but I am disappointed that they did not capture many (or sometimes none at all on some obstacles).  Making sure photographers are on the course before participants is a must if participants are expected to pay big bucks for the pictures captured. This isn’t the first race I’ve had this happen with.    Also, make sure there’s a photographer at the awards ceremony.  For some of us, we attend these events alone so we have no one to take pictures of us. 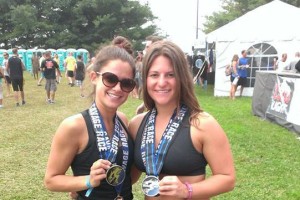 You know, for a simple t-shirt, I really like my Savage Race shirt.  It fits well, and it is soft.  But I might just be a little partial because blue is my favorite color.  The merchandise tent was giving out free Savage Race car decals.  I’m not one to put stickers on my car, but my car now proudly has a Savage Race decal on the window!  Thanks guys!  The beer was beer–nothing special.  And for the finishers, the finishing medals are pretty nice, and the age division winner medals were even better!  Great quality.

It worked.  Not much more you can ask for.  Yes, I have been to races where it didn’t.  Savage Race uses a wrist band.

OCR is expensive.  It just is.  With the closing of many fun ones over the years due to lack of funding, we can’t expect them to be cheap.  For the obstacles, Savage Race is definitely worth the price.

If you like adventure, mud, huge obstacles and facing your fears, Savage Race is definitely worth the time, money and pain.  Find one near you.  You won’t be disappointed.

Mud on the Mountain in the Dark Race Review