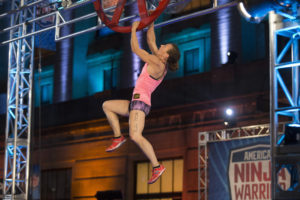 The final National Ninja League of 2016 is taking place at The Edge facility in Michigan.  Travis McClure takes a look at some of the competitors to make some predicitions for who will come out on top.

As of writing, I only see the names of four ninjas who have been featured on American Ninja Warrior on the competitor list: Andrew Karsen, Brandon Mears, Ethan Swanson, and Michelle Warnky. Much like at XT fitness, my favorite has got to be Andrew Karsen.

Other obvious favorites are the Windy City Warriors Brandon Mears and Ethan Swanson. In season 7 Brandon made it all the way to American Ninja Warrior’s stage 2, and Ethan accomplished that feat this year.

Travis also looks at the results from ObstaCool last week.

Taking the course with the John Cena entrance music playing on a loop behind him Jon Stevens completely destroyed the competition at Obstacool last weekend. With his second 1st place finish of the season Jon shoots up the NNL standings, trialing only one ninja, Ernest “Enoch” Phillips “The people’s Ninja.” Enoch came in second at Obstacool this weekend, as he and Jon were the only ninjas able to complete the floating monkey bars.

Apex Movement NorCal attracts some of the best Ninja Warriors in...