In what is certain to be the biggest shake-up in the fastest growing sport in the world today, Providence Equity Partners LLC has acquired the three biggest brands in obstacle course racing (OCR) and will be forming one brand to help turn this fledgling pastime into a serious competitive sport.

As owners of World Triathlon Corporation and the recognized Ironman brand, Providence Equity Partners LLC believes it is in the unique position of being able to help OCR transition from a collection of rival events with different goals and methods into a true sport capable of sustaining professional rankings, acquire TV coverage worldwide and standardize races to form a true championship series.

The Tough Spartan Warrior Challenge, as the united brand will now be known, will like the Ironman brand encompass the best of each former race’s identity to create a truly world-class OCR series that will have an instant market in the North America, Europe, Australia and Asia.

Obstacles at a Tough Spartan Warrior Challenge event will be standardized across all distances to allow a clear championship to emerge, and penalties will be adhered to for the professional and competitive age-groupers wishing to earn championship points – a choice of a 1 time minute penalty or 20 burpees for each obstacle failed or skipped.

ESPN and Fox Sports have already indicated their willingness to give this new entity highlight coverage at each major event, and several major sponsors such as Nike, Oracle, Coca Cola, Doritos and Budweiser are already in talks to become naming rights sponsors. Turkey Lurkey will be staying on as official turkey leg sponsor of the 5km Sprint.

For more information on the new Tough Spartan Warrior Challenge and to sign up to be one of the first to become part of this exciting new race series, please visit www.toughspartanwarrior.com

For immediate release or for more information, please contact: 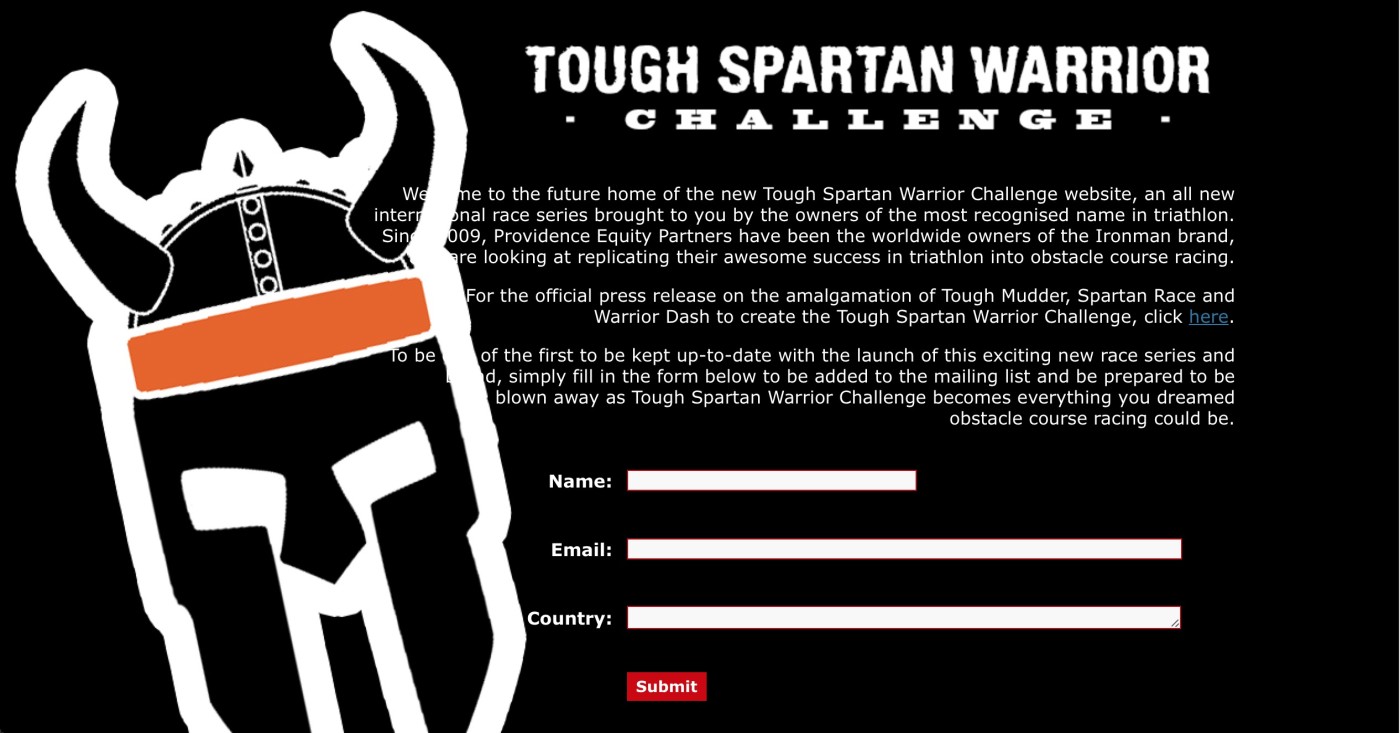 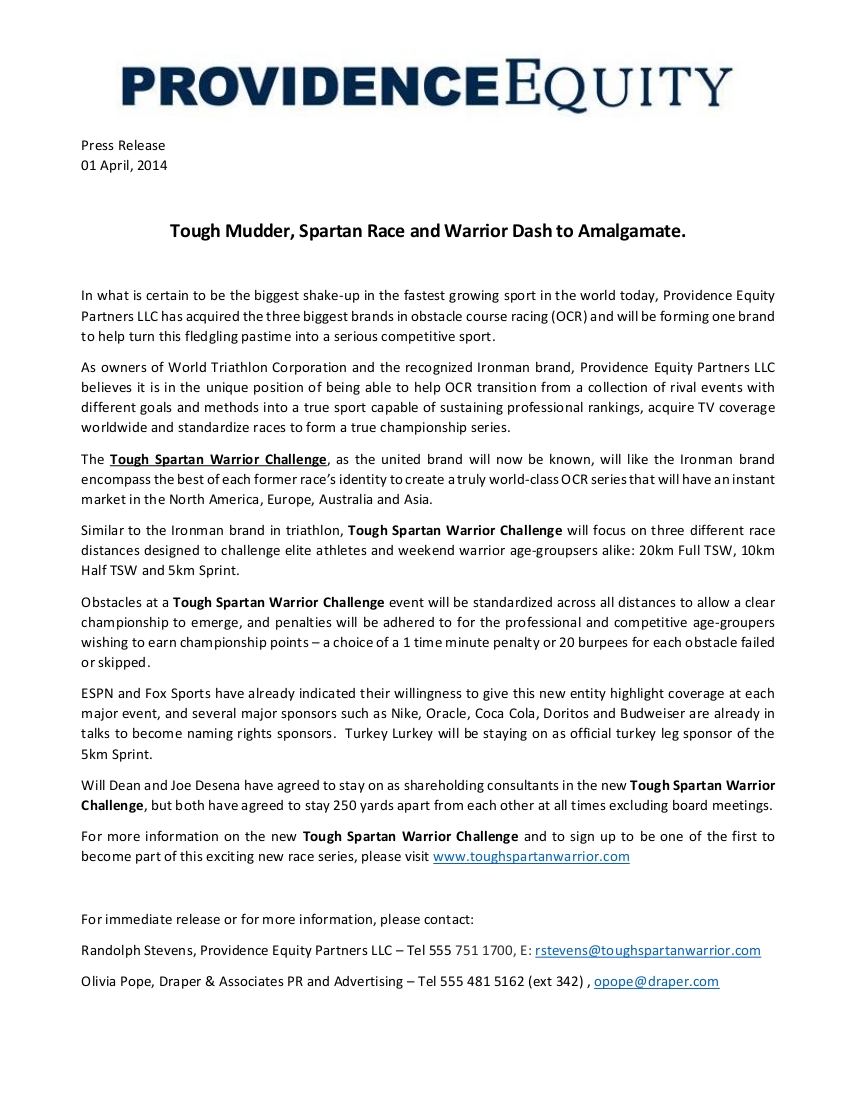 In the leadup to April 01, 2014 an official-looking press release was put out indicating that a private equity firm called Providence Equity Partners LLC (a real company and owner of triathlon’s Ironman brand) was posted and circulated indicating that they had purchased Tough Mudder, Spartan Race and Warrior Dash and were going to be amalgamating them into one massive race series which would be branded as The Tough Spartan Warrior Challenge.

To add credence to this claim, a website www.toughspartanwarrior.com with a hybrid logo was launched where interested obstacle racers could get a little more information on the planned merger, and sign up to be put on the mailing list to receive notifications when the new race was launched.

Of course, many obstacle racers world-wide were skeptical and smelled a rat.  It sounded (to some) to be too good to be true.  Some questioned the cost of buying out all three.  Some noted the subtle humor in the press release that said that Will Dean of Tough Mudder and Joe Desena of Spartan Race would be involved but would stay 250 yards apart at all times excluding board meetings.  Some looked at the calendar and realized it was April Fool’s Eve.

So who was the rat behind this prank?  And why did they jump the gun and not wait until April 01 to play it?

The answer is that the rat in question is actually Dog – James ‘Dog’ Musgrave from Obstacle Racers Australia.  Being from Down Under and being 18 hours ahead of us here in the USA, ‘Dog’ launched his joke on April Fool’s Day in his timezone.

Obstacle Racers Australia is a website devoted to promoting all things obstacle racing in Australia – much like Mud and Adventure in the United States.  It has a calendar and listings and reports on news and provides news and has quite a strong obstacle racing community surrounding it.  You can check it out at www.obstacleracers.com.au

Having done obstacle races and mud runs since 2009, ‘Dog’ Musgrave launched this website back in 2012 when there were a whole seven or eight obstacle races in Australia to keep track of.  Similar to how obstacle racing has exploded here in the United States it also exploded in Australia, with over 60 now on the calendar and several more on the horizon.

‘Dog’ came up with the idea of the Tough Spartan Warrior prank several months ago and thought it would be a fun way to get the obstacle racing community talking and see how many were fooled.  Spartan Race World Champion Hobie Call was one such who fell for it, posting on his own Facebook page “Does anyone know anything about this? It almost sounds like a joke. I laughed at how poorly inspired it all seems, and yet am sure it will be a success in their eyes. I really don’t know what to think.”

Many others also chimed in on various Facebook pages where the joke was announced.  Many obstacle racers who were fooled were excited by the concept, many were critical of such a merger, and over 500 signed up to the mailing list from Australia, the USA and other obstacle racing countries.

What was the response from the parties named in the press release?  Joe Desena of Spartan Race contacted Dog once the site and press release went viral to express that “I might do something similar… :)” whilst Managing Director of Tough Mudder Australiasia commented that he had “a good chuckle” at the prank.

‘Dog’ says he certainly hoped to sucker a few people in, but had no idea that quite so many people would fall for it or that it would go viral in other parts of the world.  He assures us that anyone who signed up for the mailing list will not be added to any sort of database and simply included that to get an idea on the number of people who were fooled.  He goes further to guarantee that all emails sent in via the fake website will be deleted.

If you were excited by the idea of the Big 3 getting together at long last, then we are sorry to tell you that it was merely an elaborate April Fool’s prank by an Aussie obstacle racer who likes a good laugh.  If you are one of those who howled at the idea of these three separate brands becoming one then we are happy to reassure you that it is not on the cards.

We hope you had a happy April Fool’s Day!

News from Across the Pond – December Round Up

What Makes a Profitable Mud Run