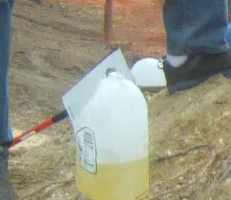 The world of OCR is widely variegated with respect to the quality of events out there. While there are a few “majors” where we throw down some hard-earned coin and have a pretty good idea of what we’re getting ahead of time, other times we roll the dice and sign up for something because of a cool website, a coupon code, a convenient location etc. and hope for the best. Rebel Race was one such event for me. I looked at my calendar and saw a major event looming at the end of April, so I tried to fill in some smaller, more local events to prep for it.

First, let me give you a description of this event from their FAQ page:
What in the blue hell is Rebel Race?
“Rebel Race is a weekend get-away for athletes that want to run a military style 5k or 15k and then party like there’s no tomorrow! — it’s the most bad-ass, adrenaline rushing, hardcore run ever!
The Rebel Race Series is designed for extreme athletes feeling the urge to tackle intense obstacles. From start to finish, Rebel Race’s military style obstacles will have you dashing, barricade-climbing, mud-crawling, rope-swinging and fire-jumping. Ourgrueling course forces each rebel to test their physical toughness and mental endurance. Cross the finish line and bask in the glory with tons of beer, food, live entertainment, and thousands of new friends covered in mud. Earn the bragging rights!”

“The most bad-ass, adrenaline rushing, hardcore run ever!” Got that? Because the biggest adrenaline rush I got from this lame course was the anger I felt at being ripped off.

The race was held at Cousins Paintball Park in Manchester, NJ and the cost varied depending on when you signed up. They offered a 5k for $55-$75 or a 15k for $75-$105. The 15k option simply allowed you to run three laps of the same course. A week before the race we got an email informing us it would be $10 to park. Because this was so close to my house I refused to pay, so I parked a few miles from the site and biked in and out, figuring the extra 10 miles of biking would be good exercise. I felt good saving the money and I would recommend doing this again.

The course was flat, being nestled in the Pine Barrens, and consisted of mostly single track trails. Single track means that there is no room for passing so the fast runners were held up by the slower runners. I don’t really care about my time, in fact when they handed me a timing chip at registration and told me there was a $25 non-return fee I handed it right back. So when I found myself approaching walkers or slower joggers I waited politely, and most of them were kind enough to step to the side so I could pass. When I had people behind me I did the same. Just plain courtesy, and as you know I just love the camaraderie and fellowship of being around other mud runners. If you are out on the course with me we are a team whether I know you or not, and it is this supportive environment of mutual respect that makes me love being around you al!
So what did we get for our $55-$105? Well, you got a t-shirt, a duffel bag, a little dog tag that they called a finisher’s medal and a beer. But what about the course, you say? Well, here is the list of obstacles from their website: 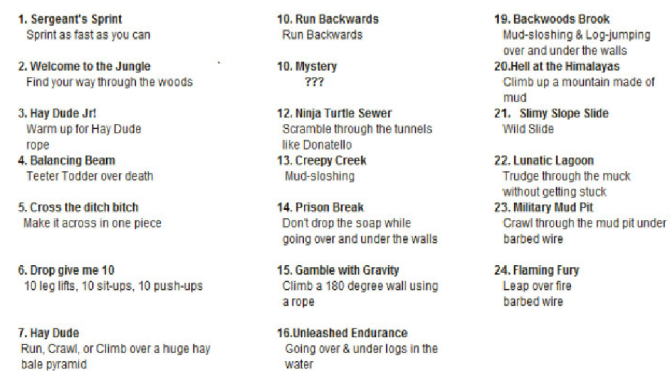 The first two were just a fancy way of saying “Begin the race”, not really obstacles at all. Ditto for stop, drop and roll, run sideways, run backwards (I’m not making this up) and do 10 pushups, 10 situps and 10 leg lifts. All of these were indicated by yard signs stuck in the ground and marshaled by volunteers or some of the local National Guard soldiers who were working the event. I like the idea of running through the woods and stopping frequently to do calisthenics, in the Marine Corps this was called a Fartlek run. It is a great way to TRAIN for an obstacle race, but a slap in the face for anyone who paid almost a hundred bucks to “Escape The WEAKday” (their slogan), only to find that the “obstacles” could be done at home, for free, and without waiting in line. Weak, indeed.

And because of the single track there were plenty of lines. At each obstacle we waited. Waited to crawl under orange construction netting. 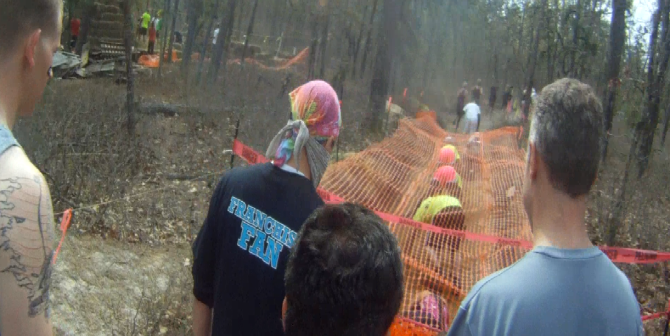 Waited to run through a “mud pit” that consisted of a tarp and a few little puddles. Waited to go down a slide that was really just a tarp covered in vegetable oil (I saw the gallon jug of it waiting to be used for periodic relubrication.) Waited to go over the balance beam, described on their website as a “teeter todder over death” where I guess “death” meant the ground and “over” meant 6 inches over. Yes, it was that bad. Towards the end the field had spread out as the track widened and there was no waiting going over the 6 foot walls, traversing the cargo net or crawling under logs which appeared to have just been laying there anyway.

Towards the end the race built to a finish with the following three obstacles. First, we sloshed through another “mud pit” (tarp with a little water in it) and had to crawl under more orange construction netting. One of the volunteers threw a bucket of water at us for good measure, reminded me of that old Nickelodeon show You Can’t Do That on Television.

Then we jumped over a little tiny fire. I could have given my five year old a magnifying glass and a few leaves and he could’ve made a bigger fire. By the way this is listed on the map as “Flaming Fury.” The last thing standing between us and the finish line was “The Great Wall of Rebel Race” which was a 12 foot tall wall with spacing between the boards for footholds and handholds. Really, this is the best obstacle? The grand finale?

The finish was right after the “great” wall, marked by those little tiny orange cones they use for shuttle runs in gym class and a banner strung between two trees that said “Finish.” I got my “medal”, a hunk of banana and a cup of water. The shower situation was atrocious, and the after party had no organization to it, though the band was decent. To say some positive things about this race I will say that this is the first race where I was offered my choice of free beer: Shock Top, Bud Light, or Land Shark. They were supposed to be giving out little souvenir boots to drink out of but they were out of them. A lot of the volunteers, both civilian and National Guard were great except for the handful of pineys smoking cigarettes at the obstacles. Pro-tip, nobody at an athletic event should have to choke on second-hand smoke, so if you want to burn one kindly step away from the course.

To provide full disclosure you should know that New Jersey was experiencing drought-like conditions when this event occurred, though that is no excuse for having no mud at a mud run. If you are a race organizer you rent a water tanker and pump water in as needed. A quick look at the course description has the word mud in every other obstacle and the pictures show people covered in, you guessed it….MUD. The sad reality is the lack of mud ranks BELOW the dangerous obstacles, the horrible bottlenecking, the lack of organization and planning, or the refusal of the race organizers to address any of these complaints despite repeated attempts to contact them. Several irate participants contacted the Better Business Bureau as well as the Attorney General’s Office, in this state as well other states where this travelling train wreck of a run has been. But don’t take my word for it, there is even a Facebook group devoted to warning people about this dud, found here: https://www.facebook.com/groups/228410003939781/

A little research on my part revealed that other Rebel Race events have received similarly bad reviews, yet somehow Rebel Race is still in business, while a reputable event like Hero Rush just declared bankruptcy. Doesn’t seem right, does it? And for the same money they are charging you could run a Rugged Maniac, Superhero Scramble, or other comparable event and get triple the value based on what I experienced out there in the Pines that day. So to anyone who has run a Rebel Race, I’d like to know what your experience was like. Did I just have the bad luck of running a dud event, or is this the way they do business? Have they improved since that debacle in Jersey a year ago or are they still duping people with a website and a slick video? Comments are open, and I’d love to hear your thoughts. I’ll leave you with the thoughts of veteran OCR fanatic Ken Jacobus who summarized this event accordingly:

OCR – My Story, by Steve Manns

It’s Time for a Change of Course – A reflection on...