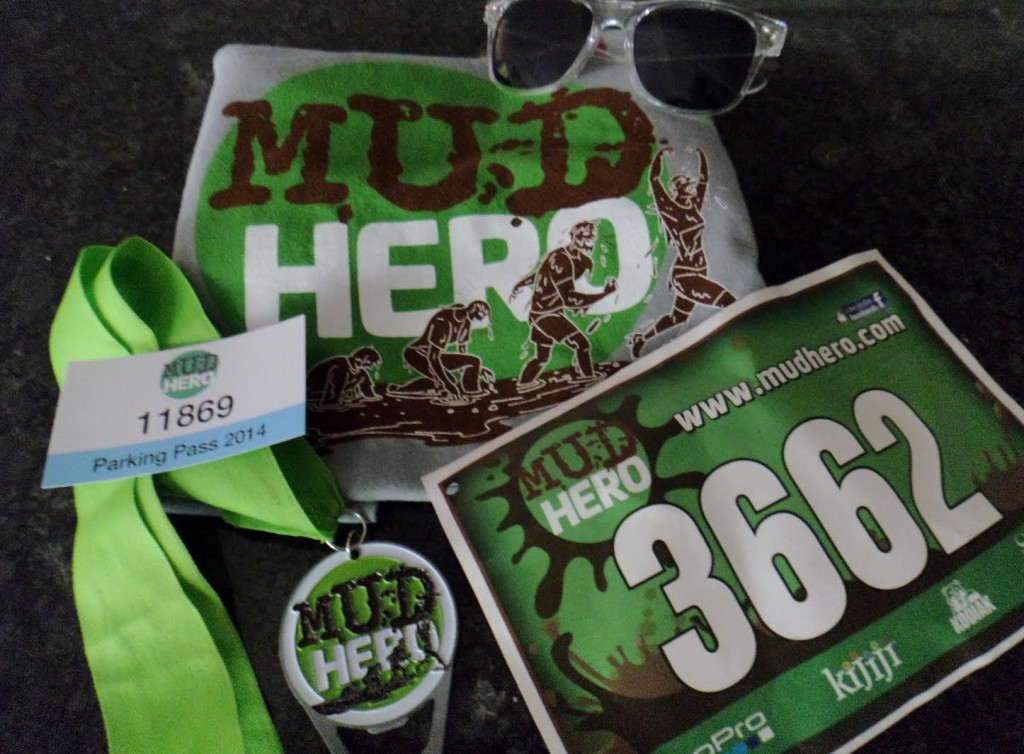 We head off early to beat the anticipated traffic; it will be about a 3.5 hour drive.  The weather is overcast and muggy.  We have packed our car full of snacks, beverages and the necessary technologies –IPhones, GPS… and we now take a hardcopy Google Map as sometimes Garmin leads us astray.

The location for this event was Albion Hills Conservation area which is a beautiful blend of trails (27Km) that wind in and out of forest and ravines.  Located an hour from Toronto, racers could visit the town of Caledon along the way for dining and shopping, if interested.  Directions were clear and it was easy to find the access point to the event.  OPP supported the event and were seen at various entrances and exits.

After a short drive into the park you were greeted by park employees who collected the standard $10.00 parking fee and provided you with a Mud Hero dash ticket.  You were then directed to follow the ‘flagged’ volunteers to a designated parking area.  Parking was ample and spread out over kilometers of parkland.  We were directed to section ‘F’ and easily parked the vehicle to unload.  Small buses were available for racers to transport them directly to the main venue area and were making rounds regularly.  We chose to walk to the event to burn off some nervous energy.   We loaded up our backpacks and began the 2Km trek towards the tents and music.

With 5003 participants registered (1662 Male & 3340 Female); the line ups to get your race kit were short and well organized by surname (alphabetized).  Emails were sent prior to the event to confirm your details and emails were responded to quickly.  They had run out of a few shirt sizes in the female style but you had the option to take a smaller size in the male version that was acceptable.  T-shirts were a nice grey and there were no Mud Hero backpacks handed out this year.

Bag check was available on-site free of charge, however, there was a self-checking process where you got a number and then checked and retrieved your own bags which became the only delay when departing the venue with racers waiting to get their numbered arm bands removed that matched their personal gear.

There were ample port-o-lets on-site near the main venue area and portable wash/soap stations to wash your hands afterwards.  There was also a main building near the pool that racers could use if they were not partial to the portable alternative.

Showers (elevated/secured hoses) were available back near the start line and the 8 line-ups moved relatively quickly when racers did not spend an abundance of time –soaping up and rinsing off.  I wonder where rinsing etiquette went and people now feel they have to completely ‘bathe’ while others are patiently waiting for their turn to “rinse” off.  Some people resorted to a nearby creek to get most of the mud off before changing in covert areas throughout the main entertainment area.  As with many races, any parked vehicle or tent is fair game and most were being used by participants to towel off, strip down and re-dress to be comfortable for the remaining festivities.

Many spectators chose to remain at the main venue area and had great visibility of the key obstacles like the Kong cargo net and final mud crawl.  Glad was one of the sponsors of this event and they handed out plastic bags which became quite useful as you loaded your wet gear into bags directly from the showers.  Wet Naps was the other sponsor and again, quite useful during the clean-up process. 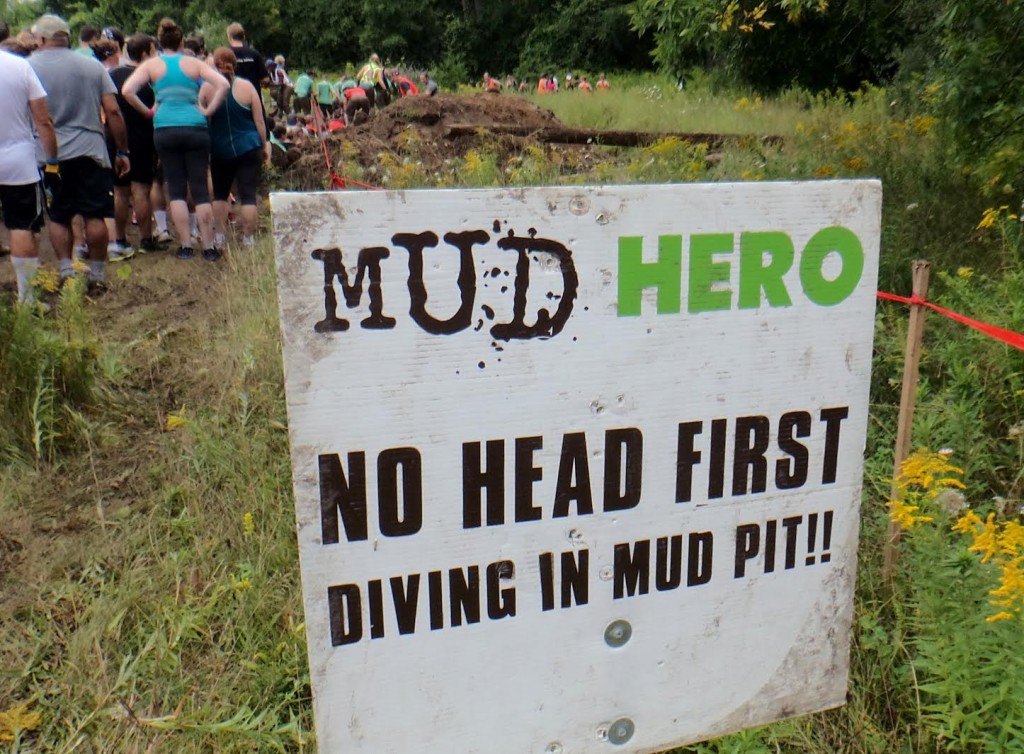 Volunteers were scattered throughout the event and signage was clearly visible and well organized from start to finish.

We arrived early and managed to start about 20 minutes after arrival.  Our team of 6 headed to the start line and began to feel the excitement build as the MC did various group dance moves and a camera crew snaked in and out of the crowd filming the enthusiastic racers.

The anticipated countdown began and we were off, weaving our way up through the gentle hillside and into the cool, damp forest.  Participants were immediately faced with a deep and slippery mud pit that had people laughing and taking melfies (mud selfies). The trails were well marked and the terrain was fantastic with streams, hills and trails cutting in and out the conservation area.  With over 1200 acres of woodlands, there was a lot to choose from.  Only a few bottlenecks occurred at the beginning but spaced out over time. 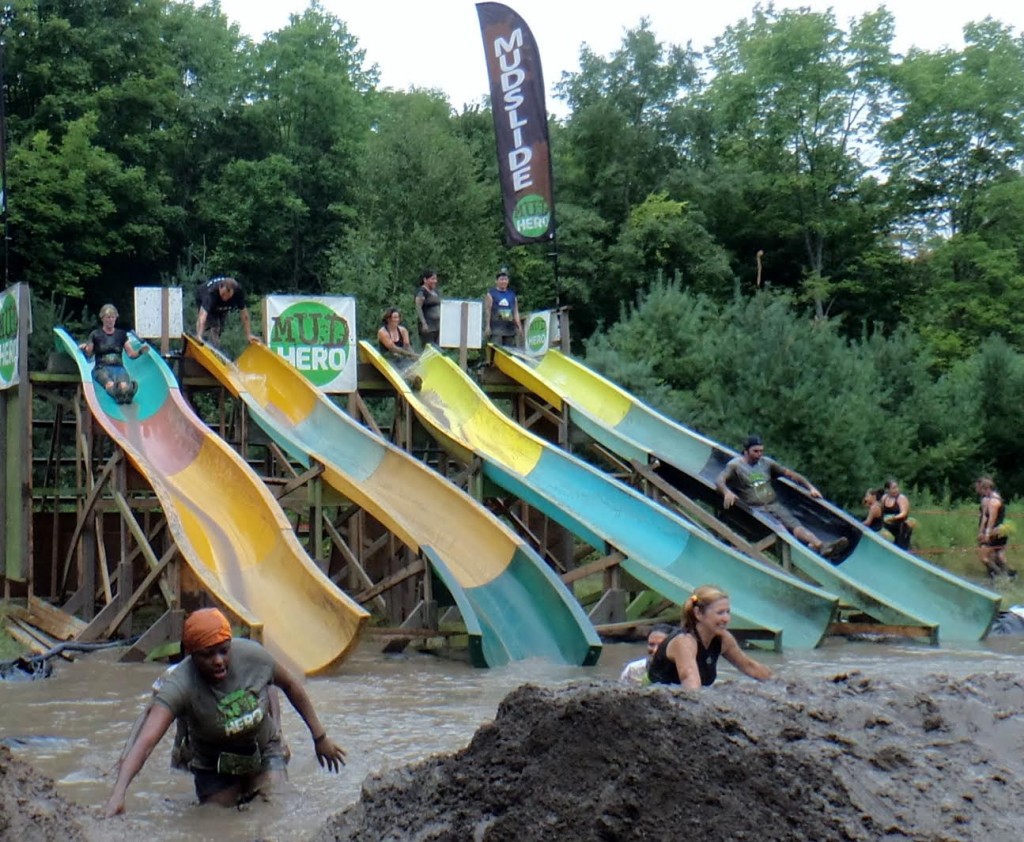 Some of the standard obstacles were present such as the wall climbs, tunnel crawls, balance beams and a great water slide.  One of the larger obstacles was the Kong cargo climb where racers used a rope to scale one incline, then traversed a giant cargo net like agile spiders to then descend the second roped wall climb.  Other fun additions were the smashed car climb and the waterfall run through near the half way mark.  Water stations were available and well positioned and the mud, ah yes, the beautiful mud, it was EVERYWHERE and it was of the finest (non-smelly) blend!

Upon completion of this fun-filled race you were met at the finish line with the catchy lime green medal/bottle opener and a free milk beverage.  Times were posted in that area, but we did not bother checking the list.  Photos are included in your racing fee and you could get a professional shot taken back near the tented area and they were posted free online in high-res format for download.

There were sponsors on site such as State Farm, mynextrace and Kodiak who handed out samples and small gifts and racers could head over to the dining area and get one free drink with the return of their timing chip.  Music was blasted to keep everyone entertained and there were little to no lineups considering the amount of participants.  Everyone appeared to enjoy the food selection and tables were full of contented and well-fed racers.

Overall turnout was up this year from last and the majority of racers were female at this event.  Sadly, there were no merchandise tables to purchase Mud Hero SWAG anywhere on site.

This race had excellent communications, a user friendly website and sent out reminders and details as the race date approached.

Medics were on site at a centrally located area.

Overall, Mud Hero ranks in my top 5 for true ‘Muddy Bliss’.  It is recommended for the entire family and not only boasts a great location, but plenty of mud and fun to satisfy all levels of racers.  Generally speaking I do not repeat a race, for this one, I will make an exception –over and over again!