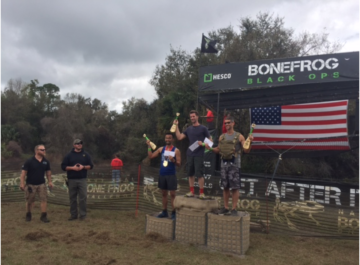 Recap of the first Bonefrog Challenge of 2017, which took place in Orlando, Florida.

There were many low crawls throughout the course, some complained too many- but this was one thing that worked to the advantage of smaller people. While new racers seemed to love the muddy low crawl to the finish, seasoned racers were frustrated with getting muddy right at the end of an otherwise clean, dry course. There were an abundance of volunteers who were both knowledgeable and helpful. The course was extremely well marked and the obstacles were spaced out to avoid long stretches of just running. Many people anticipated their new obstacles which were not found at this event.