While I’m not sure if I have the desire to put myself through the very tough, physically brutal and mentally exhausting 48+ hour test of a  GORUCK Selection just for the sake of testing myself, I love following the stories unfold.  There have been 13 Selection classes to date and only 21 finishers. Often classes go “black” – when no one finishes. I don’t know what the finish rate for the Spartan Death Race is but I believe the Death Race’s is much higher (sorry future Death Racers if this statement catches the ears of the race directors). OK, so the Death Race finish percentage isn’t actually that high but in overall number of finishers, those who have passed Selection are in a much, much more exclusive club.

Reading the comments on Facebook in the GORUCK Tough community group is always a source of amusement and often as in the case of following Selections unfold play by play, a source of inspiration and awe (you will have to do a Challenge event to gain access).

I followed Selection class 012 unfold via Facebook with great interest as it took place right here in New York City and  I was on the fence about signing up for this myself in the days leading up to it.  I am glad I didn’t. No one passed the PT (physical training) standards to continue on in the event and the class went black in about three hours. I don’t think I would have passed the standards that night and right now I’d squeak in a pass and then be toast. The PT test is just to ensure you arrived prepared.  You don’t pass, you don’t get to play. You don’t do Selection on a whim or if you aren’t sure. It is very obvious that it is something you long for and are 100% committed to beyond anything else in your life leading up to the event.

Selection 013 the first class after GORUCK leadership decided to limit the Selection calendar to once a year to allow for more serious participation after what transpired at Selection 012 apparently had more people show up fit and pass the initial PT test to kick off the event. Nonetheless the class dwindled to just one candidate – “roster #001.” Following one person dealing a set of cold D.C. nights with the full attention of the event cadre for more than half the event made for a great story – especially as the GORUCK community watched, cheered and initially guessed at this man’s identity – an active duty Marine Corps gunnery sergeant (Semper Fi brother) named Robert Joseph.

I stumbled upon this set of posts by one of GORUCK’s more colorful cadre  (special forces vets who lead GORUCK events), Bert Kuntz. Bert is both feared and loved for his ability to dish out the “Good Living” and his passion for maintaining the “standards” when it comes to Selection.

November 16 at the conclusion of Selection 013:

Today Bert posted this gem regarding his thoughts on Selection and roster #001 that resounded well with me and I assume with much of the GORUCK community: 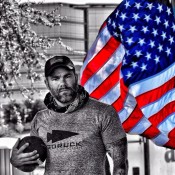 I am a pessimist, I see the glass the half empty, I’m a worst case scenario guy, everywhere I go I look around to see who I have to kill to get out safe if things go bad…..every time I meet another guy or girl who has worked in Special Operations I don’t see a skydiving, combat diver, gun smoking, life saving, war heroes…..I see a people who have spent more days working hard and being miserable than they have being safe a comfortable. I see years of hard training and bad days away from family, friends, and home. I see hours in the gym, walking in the woods, swimming in the big blue, shooting at the range when it’s 100 degrees in 80 lbs of kit. I see men who probably spent more time writing shooter statements than they probably did on the actual target working. My point is…..for every moment of glory and honor there is countless hours, days, months, years of hard work, training, and misery that no one ever sees.

This last weekend a man…..a great man, who already spends every minute of his life defending the greatest country the world has ever known by training and working under constant stress and in miserable conditions. He came to D.C. With 22 other men, in what I can honestly say is the most physically fit GORUCK Selection class to date…..and he killed it. Like the others before him, 48 hours was irrelevant. He would have walked to Mexico if we would have asked him too.

My point in all of this is simple….if you are planning to go the GORUCK Selection, get off FaceBook or watch it quietly from the shadows and in between workouts. Don’t focus on the glory, focus on the pain and pushing through it.

Again, thank you Robert Joseph (Alban) for training to the standard and then meeting it. Thank you for your service to this Country and it’s people…..I feel safer now knowing guys like you are protecting me, my family, and my friends. You have recharged my faith in people. Lastly, I want to publicly thank the Cadre…Devin, Jerad, Cadre Tyler, Craig, and Dan L. for the most professional event I’ve seen yet from GORUCK. Thank you…..