While most elite athletes were a little more south in Virginia doing something [Spartan Race] Super on Saturday, I made the trek to Northeast Pennsylvania for the Poconos edition of the Warrior Dash.  I mainly chose this event because my good friend Travis and I wanted to complete a more “fun” type OCR event at some point over the Summer after having A LOT of schedule conflict on dates of other OCRs and for one reason or another, we saw this one to fit.  It worked out for us and I wouldn’t regret it.

The Warrior Dash always has a Homecoming type of feel since it served as my launching pad into the OCR Universe back in October of 2010 & this one would be my 4th time going for the infamous fuzzy helmet.

The venue (in which seems to have become a regular spot for when the Red Frog Events based race comes to Pennsylvania) is held on the hallowed grounds of auto racing’s famed “Tricky Triangle” Pocono Raceway.  The course though stays on the outside perimeter and performs a loop around the actual site in a mainly open and overhead wooded trip around.  As you traversed around, there were both motorcycles and stock cars taking some practice laps around so as you were more near the fences around the track, you’d get that buzzing roar of the engines giving a unique twist for this site.

This was the t-shirt motto for the “World’s Largest Obstacle Race Series” for the 2014 calendar year. 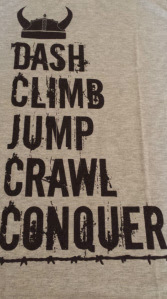 Albeit, there was a little bit of everything in this phrase across the course, I think they should have used a larger font on both “DASH” and “CLIMB.”

At times, I felt like I was caught somewhere between a never-ending infomercial for the Little Giant and a Ladder Match in the WWE.  Giving them a vouch for seeing a limited amount of things you could create outside of the venue this takes place, I understand the layout of the course at Pocono however I still don’t understand why about 90% of the obstacles were scaling various walls, ramps and cargo nets.  Don’t get me wrong, I love the physical aspect of OCR’s where us strong guys can gain some ground and advantage on the pure runner types but mix it up.  Sure it was a nice blend of different and non-repetitious climbing challenges but throw a set of monkey bars or something like that in there for us too.

Mother Nature did indeed help them out though as morning rain storms plowed their way through the area, my heat was overcast with ominous skies and left MANY areas of the course puddled and torn up and muddy from prior heats.  From my past experience, I remember running on a lot of cinder and smoother dirt surfaces.  That was not the case this time around and it added to the challenge.  60 and cloudy in late AUGUST, certainly one of the ordinary.

As we neared the end, we tackled what I must commend Warrior Dash as a real signature obstacle of theirs entitled Goliath.

After scaling what seemed to be about a 2-story high cargo net, you approach a platform with balance beams with ropes on either side of the beam you pick with a steady flow of water spraying you down as you try to cross over.  Unless you stop at some point, it shouldn’t be too difficult for anyone to get past but it still had a heartstopping quality to it where you could very well fall a considerable distance down.  Once past that stress, it’s like a trip to the local water park as you take a slide down into the muddy water below.

My only wish for Warrior Dash is to slowly start adding more obstacles like this into their arsenal.  They have quite a few “big” ones but I’d love it if one of the pioneers of this industry would just go balls in on a bit more of a fierce look and attraction to OCR runners looking for more of a challenge.  It held a solid punch but it’s still a bit on the tame side.

After Goliath was as always, a crawl through barbed wire and mud separating you from the finish line but it seems like this year, they abandoned the thick pool of slime that caked every competitor in their signature mud for more of a pool of muddy water at the end.  Pretty disappointing for the mud enthusiast but understandable to an extent.

One feature to this change was the deception at the end of the watery pit which may turn into disaster one day as we and many others found out.  After the barbed wire portion, the desire to get up and run through 2-3 feet of watery mud with the finish line in sight is there but it quickly turns into a sudden drop of atleast 6 feet at one point ensuring the reason why you sign the ole waiver. After completing the course, we went and watched others hit that spot and a lot of those falls albeit funny, didn’t look good at all.  I wouldn’t be surprised if a broken leg or a snapped ankle comes from this at some point sooner than later.

The course overall was pretty decent, I’ve seen worse but certainly have seen better and for what Warrior Dash is going for these days, they are right about par.

I usually don’t take the time to enjoy much of the “festival” areas at these events but between their partnerships with the National Guard, Monster Energy and Shock Top, they have one of the most organized, well marked and wide open festival portions to enjoy across the OCR community.

Sometimes Mother Nature smiles on you, sometimes she frowns on you.  Sometimes you’re just a couple of lucky SOB’s.

Our drive up had my windshield wipers working for most of the haul but from shortly before we arrived until we got back to the parking lot, it stayed cloudy but dry for us.  We got into the car to leave and as I began to back out of my spot, the faucet was turned back on and so were my wipers.  I’m thinking the “raindrop dodge” was this race’s mystery bonus obstacle.

This Month in GORUCK: January 2017 Edition