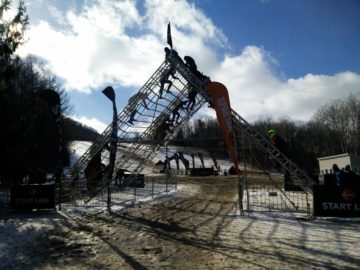 Another look at the Spartan Race Greek Peak Winter Sprint, the first US winter race Spartan has held.

There are already two more on the calendar for 2018, one in New Hampshire and one in Utah. The racers I spoke to were willing to drive over six hours to get to this event, and despite the cold, cold weather, seemed to enjoy themselves. Many already had other plans to complete a Trifecta, so it would appear that they were doing this race for the novelty, not just for the sake of doing a Sprint distance. It is unclear at this point whether Spartan will come back to Greek Peak, whose name must have resonated with Spartan founder Joe De Sena. There are references to Classical Greek themes throughout the area (I flew into Syracuse, the ski resort is not far from Ithaca, etc.), and the trails we used for the race were named “Odyssey” and “Olympic”. How could Joe not come back here? However, I have to wonder at how effective it is to host an event at a ski resort while it is open for, you know, skiers. OCR as an industry has done a great job of making use of venues that are otherwise empty, providing revenue for the owners and the local communities. Hosting a large event that could displace the regular customers doesn’t seem to be as clever a move.