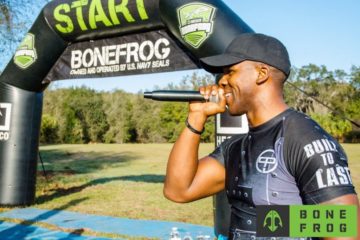 One reviewer of BoneFrog Challenge didn’t think it was a race worth the money, however, is willing to give them a second chance to impress.

There were a lot of low crawls and simple walls that made up what seemed to be the majority of the course. The bigger obstacles did not seem to be put together as well as they could have been, even though everything managed to hold together throughout the duration of the event. I really loved the “black ops” monkey bars in front of the giant american flag. This one obstacle made for some really memorable finisher photos and truly stunning shots. I do wish that there were more photographers on course, but there were at least a couple out there that resulted in everyone getting a few official race photos.

At the end of the day, I do not know that I would rush to sign up for another event in Florida due to the show they put on and the high entry cost. I would be very interested in trying out a Bonefrog Challenge in another state since I have heard that other locations are able to bring more to the table and leave a more positive impact on the participants.