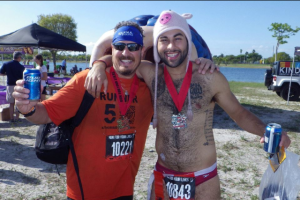 This piece is going to be written about the fun, OCR-ish zombie infested Run For Your Lives event. I’m going to mention both venues I’ve done this race in because even though they were held in two different places, they were similar enough that I can talk about them both here.

If you’re a fan of zombies, and want to see if you would survive the zombie apocalypse, this is the race for you. It’s a fun little 5k where the purpose of the race is you start with three flags around your waist (your lives) and as you progress through the course, you have mobs of zombies chasing after your “lives” to try and turn you into one of them. What happens if all three lives get taken while you’re running the course? Don’t worry! You still get to finish the course, but instead of being listed as a survivor, you are infected and the virus only starts to spread after you cross the finish line. So please don’t be that guy and warn your friends.

The first Run For Your Lives event I participated in was Clermont, FL back in November 2012. I was really excited because I had heard so much about the event and I am also a big lover of zombies. Just a heads up, this isn’t your average mud run/OCR that you would think, it should be called the Run For Your Lives Sprint, because you’re basically, as the the title implies, running for your life the whole time. I remember the only time I got a breather was in between the zombie mobs. So at this event they started you off in at three gates, one was titled Appetizer (1st wave), Main Course (2nd wave) & Dessert (3rd wave). Of course, I was in the main course section because I was in my piggy costume yet again. Anyways, as soon as you’re let out, you encounter your first zombie mob and what a rush that was. I was already winded 1 minute into the race because I was sprinting and dodging and weaving trying to keep my lives. At this event, I’m sad to say, I didn’t survive. I lost my first flag at the beginning of the race; another runner stopped short because she got freaked out and I had to stop because she was right in front of me and a zombie got my flag. I lost my other two flags along the course. Didn’t matter though, I had a blast. It was a lot of fun.

The Miami event was basically the same as the Clermont event, the only difference really being the venue and amount of zombies. I remember there being a lot more at the Clermont event. Both venues though had awesome zombies with funny costumes that had me laughing through the whole course. There weren’t really “obstacles” per say, but things you had to get around through the course. The slide into the pool of “blood” at the end is a fun one though. And one cool thing they did different at the Miami event was that you got a different medal depending on how you finished the race. If you survived, you got a survivor medal, if you died, you got an infected medal. At the Clermont event everyone received the same Run For Your Lives medal.

-Not your average mud run/OCR

-A lot of fun for the whole family

-Not your average mud run/OCR

-The zombies (Now I have this here because most zombies are jerks. On the site they list the zombies as either walkers or runners; at both events all the zombies were runners. They’re hungry for your flags and they will chase you down even if they are out of their pre-determined zombie zone.)

-Practice sprinting before this event.

-Gear wise: Costumes are always fun, but as there were no water or mud obstacles, you’re fine with just shorts and a t-shirt. Wear proper running shoes though!

AMAZING RACE: Your comfort zone is a nice, cozy place to...