With several changes, in 2014, ABF Mud Run can be considered New Jersey’s premiere Obstacle Course Race (OCR), servicing participants with the only stationary course in all of the Tri-State area.  Since 2010, after walking 19 hours for the American Cancer Society Relay for Life, the foundation of the ABF Mud Runs was born.  To be clear, unlike other OCRs, ABF is not a corporate event, they solely hold these events to raise money for local charities.  From about 500 participants their first year, to now thousands, one can see that they are headed in the right direction.  Chad Mason, founder and president of ABF feels that starting the race was not only to help steer people of all fitness levels towards a healthier lifestyle by giving them the platform they needed to train hard and step outside their comfort zone, but it also gave people a sense of worth, as if it were their way of giving back by raising money for local charities.  This year, all the proceeds of the event go to Wish Upon A Hero.

“After helping several large charities over the years I decided we wanted to hold our own charity events in which we would have 100% influence on where the money raised was used, says Mason.”  From that moment on, he began his training camps and created an OCR with 2 out of his 3 locations, being stationary.  Now, he says, “Last season we decided to purchase all of the equipment you need to hold a Mud Run.  This will allow us to rent out our courses to other Organizations and allow non-profits another avenue to generate funds for their causes.  We purchased several tents, trucks, generators, showers, and food kitchen from the Army Surplus.”

Chad, as he would preferred to be called, is not only about creating an event that raises money and something people will enjoy, this is his lifestyle, that is, he is a former marine, personal trainer, endurance athlete and coach.  He is more than qualified and has earned the right to be deemed and OCR guru.

He said, “I have been doing obstacle courses since the Marines in 1993.  After the first Marine Confidence course in boot camp I was hooked.  While in the Marines I received my personal training certifications and have been training people on obstacles courses ever since.  The ABF Mud Run Training Camps not only get people ready to tackle any obstacle race out there but the classes are also set up to show you the proper techniques needed.  We have taught couch potatoes to elite endurance athletes for GORUCK Challenges, SERE Challenges, Spartan Races, Tough Mudder, and several other Mud Runs.  Our training camps are designed to show you what you are capable of when you give 100% effort, what it means to move as 1 unit, and the proper techniques to conquering any OCR event out there.”

“2014 Is going to be our best year yet,” excitedly.  “Our new Berlin location is going to add a lot of new possibilities for our courses and give the total event a new look.  We do not want to give away all of our secrets for our new course but we will tell you that “Jarhead’s Playground” will be located in a 3,500 seated outdoor stadium.”

For those of unfamiliar with Jarhead Playground, it’s an action packed condensed portion in the middle of your running course, filled with 11-15 back to back challenging and fun obstacles, where if you give 100% effort, you will be totally exhausted from head to toe.  Mason adds, “all of our volunteers in this area are instructed to move each mudder as quickly as possible through each obstacle.”

Tossed between his many titles and various responsibilities, Chad still makes it a point to take the time to install and enforce the camaraderie he originally set forth to create in the first place.  He does this by continuing to be hands on with all aspects of ABF, including a strong staff and team of volunteers, who he feels above all else is the WOW factor in ABF. 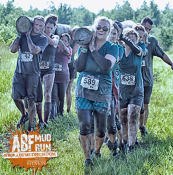 ABF in no way is trying to compete or compare themselves to other OCRs out there.  Chad feels that they are in a class of their own, and although ABF is not a strictly team race event, they are team oriented, wherein as you can register as a team and if not and you decide to run solo, to complete all the obstacles, you are required get help from other runners on the course, like carrying a telephone pole across a field, where teamwork is necessary.

“Mud runs to me are about building camaraderie within a group, showing others what they are capable of when they help each other out.  Yes, all over our obstacles can be walked around, but we request you attempt an obstacle before you skip it.”

This has been his method all along but new in 2014, an elite wave has been added for those competitive athletes that prefer to run alone and kick it up a notch.  Like all elite waves, a different set of rules will apply.  They will award $100 prize for the fastest man and woman in 4 different age categories.  The elite wave along with the other new features have caused a substantial jump in the registration rates.  This may sound discouraging to many, but this is one OCR you just have to experience for yourself. 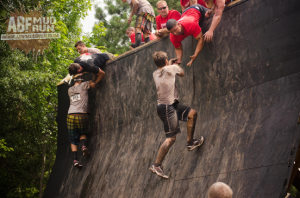 On April 26, 2014 ABF is back at their Pemberton, New Jersey location.  Some of you may know ABF already and some of you may not.  None of that matters now because everything changes.  Take their best, most challenging obstacles which several are unique to ABF only, and just add more fire power to it, a stronger supporting cast if you will.  See my review on a race I did with them last year.  The obstacles are legit.  Chad is aware that his after party/festival needs some work but he says that there is only so much he can do when he trying to make sure everything else involved runs smoothly.  It’s a small price to pay to when you consider why you are running, what the cause is , how much fun you will have, how challenging it will be, free parking, free bag check, several cool sponsors like OCR Gear and Oat Beverage and of course, your beer, snack and very decent t-shirt when you cross the finish line.

The Lore of the Death Race