This was my 2nd Tough Mudder and the feeling of confidence going into it compared to the 1st one is really awesome. When people ask you if its your first Tough Mudder and you tell them “no”, their eyes light up. They begin to ask you questions as if you have been to heaven and back and know what its like.

As much as I would like to think that I am some sort of wise sage, the coaching ends up being the same to everyone you talk to:
“Have fun, ask for help, help others, enjoy the journey”

My first Tough Mudder was in Georgia last February. That day started at 20 degrees. This time around I was looking forward to a pleasant, warm day which I would make a really fun and challenging event even more enjoyable. Observing the Saturday runners on a day that was in the mid to high 60s, I was thrilled. I was going to get my wish the next day when I ran my heat.

When I checked the weather that evening I was alarmed to find out it was going to be 35 degrees at the 8am heat start time and only get to the high 40s by the time I was finished.

Totally bummed as arctic enema and several other water obstacles loomed ahead. Some people fear electroshock therapy, I don’t sweat that one at all. I just don’t want to be cold for 3 hours straight.

I am not going to describe each obstacle in detail as there are many blogs and places on the web that you can find long descriptions of that type for Tough Mudders.

I will tell you that less than a mile into the race, we were faced with a huge hike that had one dude throwing about 1000 yards up the the hill. (A sign of a great event, wouldn’t you say!?)

Prior to this event, everyone was warning me about the Colorado mountain elevation. A guy I sat next to on the plane on the way over was telling me that “going up a flight of stairs” will cause you to lose your breath. How was I supposed to tell him that I was about to hike 5000 flights of stairs? By the time we reached the top of that first hill, I was thinking “Great, it’s flat, I can run now”. I tried running but could not. Along with being terribly winded, my thighs and calves were killing me from the huge hike up.

The first “real” obstacle other than the hill itself was Shocks on the Rocks. This is crawling under electroshock wires on about 6 inches of water. I realized I was not crawling low enough as my butt was shocked right away. So I got really low and crawled as quickly as I could. Somewhere towards the end, I got zapped and actually lost conciousness for what must have been 1 second. It was extremely bizarre though because my body kept moving forward so in that 1 second, I moved about 10 feet from where I was. It was like traveling in time in the movies. I closed my eyes and was one place and opened them and I was somewhere else.

I also decided to take off my shirt at each water obstacle so that I could put a dry shirt on afterwards in an attempt to keep warm. The tradeoff is really scratched arms and chest, but I will take that tradeoff as I mentioned I am not a fan of being cold. I highly recommend this method during cold day runs. You can always find a volunteer or random participant who is willing to hold your stuff while you do an obstacle if you ask nicely. Worse case scenario, you can just put your stuff on the ground, do the obstacle, then run a few feet back for it.

The remainder of the race was made up of, somewhat challenging, and fun, standard, Tough Mudder obstacles with a few special snow based obstacles as well. The team at Tough Mudder had built a few hills made of snow to climb over. Those were fun, except where they had a dude blasting you with a water hose. (If I ever get to run on a warm day, these will probably seem pleasant I am sure). 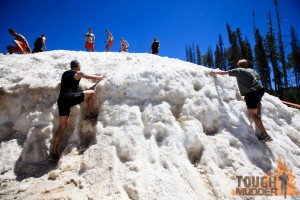 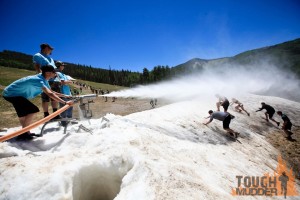 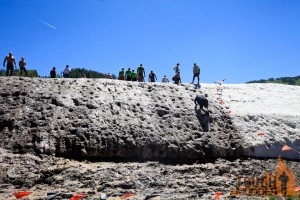 Overall, I thoroughly enjoyed this course. I spoke with the lead Tough Mudder course designer and he told me that it was “the hardest one yet”. It was 12 full miles and we climbed almost 3000 feet of elevation twice. I am proud to say that I did in a little less than 3 hours and 45 minutes.

It was also interesting to run the event solo. I had run my first one with good friends in a team of ten. Even though that team of 10 broke down to a team of myself and two others by the last 5 miles, we were there to talk, laugh, and encourage each other all along the way. This time around, I did it alone which means finding people to help me up 10 foot walls and Everest. That is not difficult with the atmosphere that is created. However, the mental aspect is completely different running it alone. I found that I had to dig much deeper when I was winded or wanted to walk, as the constant camaraderie and unspoken teamwork that comes into play when you run it with friends was not available.

I had lots of fun both times and felt personally challenged both times. There are just different sets of lessons doing it along or with a team. I would reccommend that if it is someone’s first event, be safe, and do it with a team.

This original blog post can be seen here at Matt B. Davis Runs Blog Page.