I wasn’t expecting to race in the inaugural Polar Rush race, a 5k with obstacles in the snow, because once again I was injured and rehabing my shoulder.  However, a last minute decision, registration bib, and an okay from my personal trainer, Eddy Bucardo, led me to run this new OCR as the kick off to my 2015 race season.

It had been raining all night and it was still coming down when I woke up the morning of the race (technically it’s Spring but up here in Canada, but  it’s still cold and feels like winter)  so I knew it was going to be a wet and cold one and I had to rethink my gear for the day. Instead of shorts, I chose my cold gear pants, a Canadian Mudd Queen tank as a base layer, my light Lululemon running hoodie, my long sleeve IRUN4CHARLIE shirt,my P4ID team jersey, a pair of Sox Box knee high socks, a winter running cap paired with my BattleFrog bandana for good measure,  and my Salomon’s.  I was ready to go!

My friend, and Alpha training buddy, Laura Tafford picked me up at 8:00am on Saturday March 20th and we started our 1.5 hr drive north of Toronto up to Barrie making our way to Horseshoe Valley Ski Resort. We got there with ease and looked for parking, we had a bit of a hard time finding parking for the race because of some construction;  otherwise it would have been clear that parking was the main lot. We quickly grabbed our things and made our way to find a locker. We threw on some last minute clothing and realized the lockers cost a lot more than we thought- so we decided to leave our things in the car after picking up our kit.

We got a little lost finding our way to the registration area.  It was a busy day at the ski house, but once we got there we were greeted by some happy volunteers including a very familiar and smiling Lindsay Webster. We got our registration kit which included a Polar Rush toque, bib and other little trinkets such as an Impact Magazine and some Vitamin C bonus pack, at that point I changed my starting time from 10:00am elite wave to the 10:30am wave.

Laura proceeded to run elite and I ran in the next wave with my good friends and P4ID teammates Linda Nguyen and Cliff Tafford who are also just getting back from injury so we decided to run for fun and enjoy the course.

As we walked outside, we immediately saw the festival area. There was music with an announcer, food trucks, 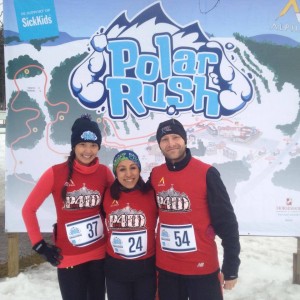 photo opportunities with the Polar Rush sign and a buzzing festival area at this new race. I was greeted by Sean Ruppel (the guy behind Polar Rush) after a quick hug and high five I took a quick picture with him and we proceed to make our way to the start line. As we waited for our heat to begin, the 1st place male was already making his way to the last obstacle, the Cargo Crawl. We cheered for him as he completed the last obstacle before realizing that the 1st place runner was our friend Jesse Bruce.

Our heat begun on time and we were off. We ran for a bit until we came across the Spiral of Death. This obstacle was 500 meters of in and outs.  We were going around and around in this maze until we finally came out on the other side. It was a crazy fun and very genius, unique idea, never seen this one before at any other race, I was so dizzy. They had a few wall climbs, Up’ and Down (which was like over and unders,) Snow Cave, a short tube slide, a spider web obstacle, a low crawl, up hill rope climb, several slippery down hills, Polar Plank and perhaps two of the most fun obstacles ever, The Crazy Carpet Ski Hill Slide (we enjoyed this obstacle so much we decided do it twice even though we had to climb the hill in order to do this), and The Snow Tube (we tubed down another ski slope.) These two are such memorable obstacles because they were so much fun.

The snow was still high in many parts of the trails, there were some nice up hills as well as down hills so the running alone was challenging. As we made our way to the last obstacle the Cargo Crawl we could hear the music and the excitement from people cheering everyone on and as we crossed the finish line of this 5k we received our finisher medals and hugs from our friend Becky Fyvie who was volunteering at the finish line.

We were cold and wet but happy, very happy, with this race.  Thankfully there was free hot chocolate for all finishers at the end to help us warm  up. We waited for the awards ceremonies and I was able to hand out the first place podium medals for age groups and overall 1st place winners. Many Alpha OT members podiumed so it was a big celebration. Once the ceremonies were over we quickly changed into warm clothing and I could finally feel my toes again.

There were many first time obstacle course racers out that day, including a 12 year old who ran his first ever OCR.

This was definitely a great way to start the race season. The snowy trails and scenery at Horseshoe Valley were beautiful during this time of the year and at one point the rain stopped and the snow started falling, it was picture perfect. Luckily for us, Cliff brought his phone in a waterproof case so we took many photo’s during the race even though there were plenty of photographers and videographers from Apex Race Photography throughout the course, at the start line, and finish line. We made sure to find them all. 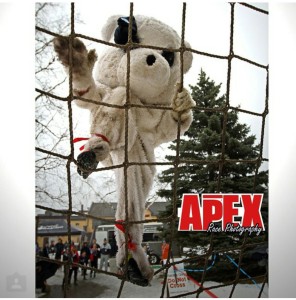 My only two regrets this day are that I didn’t get a chance to race or take a picture with “Rushy” the Polar Rush mascot (who was actually our friend Ryan Atkins inside the costume who ran the course in the elite wave) and second, that I didn’t participate in the Elite wave warm up session that was led by Jesse Bruce, Co-Founder of Alpha Obstalce Facility.

The only two things I could see that needed improvement was the lack of signage for parking and registration.  We had a difficult time finding both in the midst of all the people skiing and construction that day. There was no bag check (but there were plenty of lockers if you wanted to store your things inside instead of in the car) although the locker prices were steep. The ski house provided plenty of bathrooms, changing areas, and places to sit and keep warm. In general, this was a great location for a winter event. The volunteers and staff were amazing. They cheered everyone on, directed us where we needed to go, and were happy to be there to ensure all participants were having a great time.

It always seemed that living in Canada we didn’t have much of a choice but to only race in the summer time. Our race season usually starts in April and goes through to September is so much shorter compared to that of the U.S. when compared to some states in the West Coast having races well throughout the year.  It’s nice to see that winter OCRs are finally becoming popular.

Welcome to the scene Polar Rush!

I look forward to running this race again and I would recommend it to anyone especially those looking to do their first winter race or OCR in general. The obstacles were fun and not extremely difficult and the snow filled terrain was definitely the challenge. I am excited to see this race grow.

Now get out there and get dirty!

Polar Rush is the mastermind of Sean Ruppel. Sean worked (and still does) with another Canadian OCR group that puts together another amazing summer OCR – Mud Hero. He partnered with sponsors such as Alpha Obstacle Training and fundraising for the Toronto Sick Kids Foundation.