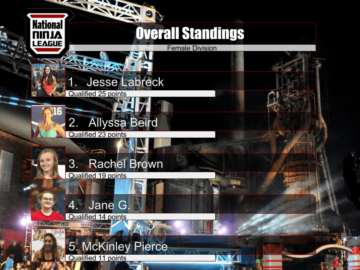 National Ninja League has 2 races this weekend, in Connecticut and Illinois. American Ninja Warrior Nation takes a look at some of the ninjas who will be competing.

Speaking of the ninjas, GCA is boasting one of the most stacked fields of the NNL season, with four stage 2 finalists from season 8 – Joe Moravsky, Drew Drechsel, Jake Murray, and Josh Levine! Throw in the current top 3 ninjas in the NNL standings: Ernest Phillips, Jon Stevens, and Noel Reyes. Top it off with season 7 sensations: Jon Alexis, Mike Meyers, and Sean Darling-Hammond, and perennial powerhouse Ryan Stratis and you have a truly talented group of ninjas.