Seven Springs Ski Resort in Western Pennsylvania added some mystery to its fourth installment of its obstacle course series with Mud on the Mountain in the Dark.   With all heats kicking off after the sun set, this race added the element of running through the Laurel Highlands with only your headlamp as your guide.  Four heats set off in fifteen minute increments on a cloudy night to conquer the 6.5 mile, 20+ obstacle race course. 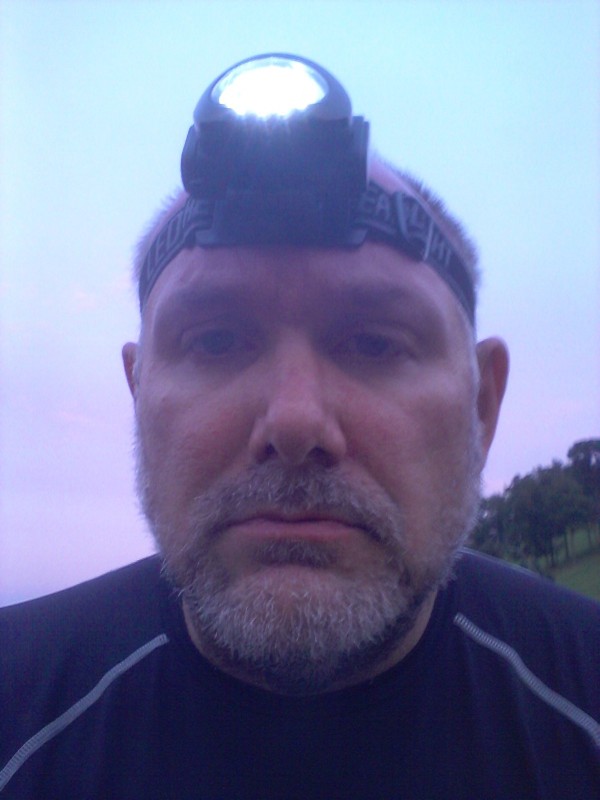 I have run two of the three previous Mud on the Mountain races and was excited to see just how the organizers would handle the night time race.  At sign in, every racer was given a headlamp to help guide them through the course.  Many racers showed their creativity creating glow in the dark costumes complete with iridescent numbers, inspirational quotes, team names, or just wacky designs.  Others attached a variety of glow sticks or flashing lights to stand out.  I was shocked that I didn’t see any racers dressed in pajamas or nighties, but those would be hard to run in.  There was a more relaxed vibe to the crowd than a normal day time Mud on the Mountain.

This race does not take long to remind you that you are indeed at a Ski Resort.  After a few hundred yards of running past your family and friends, the course heads straight up the side of the Stowe ski slope for an epic climb half way up the mountain.  A quick peek behind me showed the beautiful sight of a few hundred head lamps bobbing up the near vertical slope behind me.  This would have been a great video/picture.

After a turn to the left it was apparent that the organizers had removed some of the more difficult to accomplish in the dark obstacles as the cargo net/triangular wall from the last race was missing.  In all, I think three obstacles were removed for safety sake including a lake crossing and the trout line over a pond.  Some of the other obstacles were modified to exclude the barbed wire that normally terrorizes the runners.  It made it a safer race for sure.  Some hardcore racers might object but I think the changes made for a better event under the circumstances.

The majority of the obstacles existed in previous races but took on a different feel completing in the dark.  Climbing over walls or logs, making your way through the Granite Scamper, or navigating over six to ten foot boulders is difficult enough during the day let alone at night when your headlamp is your only guide.

As always, one of the main obstacles to Mud on the Mountain is the mountain itself.  Be it steep, near vertical ascents or long, never-ending climbs, there is simply no easy way to the top as I learned during the two and a half trips to summit.  I believe it was listed as having 1,551 feet of elevation gain.

Running through the woods in the dark added a bit of a psychological element.  Would I get lost?  Would I misstep?  What nocturnal creatures come out at night and what do they eat?  I was also worried that the race organizers (or bored local teens) would make it into a “scary event” but that was not the case.  I do have to give the prankster who put a fake alligator in the water under the monkey bars some props as I did a triple check to see what that was way out in the muddy water at the very edge of my light.

The ends of all previous Mud on the Mountains have ended with a climb up the snowy Mt. Everest.  This being August and at night, the ending was under fiery arches which should make for great photos.

As with all previous Mud on the Mountain races, I was impressed.  This race is no joke.  The way the organizers use the landscape makes for a tough run.  Each iteration of the series adds new, harder obstacles that better challenge more experienced racers.   The experience of running through the woods at night is one to not be missed.  I would give this race a solid A as both enjoyable and tough.

The next event in this series is in November.  Do yourself a favor and sign up.  Last year’s November race was greeted by a foot of snow the day before so make sure you have warm clothes when you race.