Background
If you’re reading this, you are most likely one of two types of person. 1) you’ve seen pictures of me doing stupid things with a rucksack on and a log strapped to me and wondered what the hell I’m up to or 2) you’re familiar with the GORUCK community, and have a concept of what it is. For the first group, let me break it down for you.

GORUCK is a company created by former special forces operators. It was originally created as a way for the company to test the ruck sacks and other gear that they made for current operators before they shipped them to their fellow soldiers. To do this, they created a series of events (which have evolved over time) that mimicked a day in the life of a solider in training. The three core events are:

GORUCK LIGHT– 4-6 Hours, typically 4-10 miles. Light does not equal easy, and although it is fun, the light is still a challenging event designed to give newcomers a taste of GORUCK.

GORUCK CHALLENGE– 8-10 hours, 12-20 miles. The Challenge is the core event. It’s designed around teamwork, physical, mental and emotional strength and will test participants at their breaking point.

GORUCK HEAVY– 24+ hours, 35+ miles. Heavy is the ultimate team challenge. It’s meant to break people as both an individual and as a team. You cannot finish a heavy alone, you need your team and they need you.

All events require that you carry a weighted ruck, which can vary from 16-50lbs depending on your weight and how you pack.

GORUCK HCL is a new beast, it’s all three events stacked together in one weekend, with only an hour or two in between. It’s not quite selection, but it’s probably not for you. I was lucky enough to be in only the second class, the following was our experience.

I’m sure I’ve mixed up the order of events and I’ve left out a ton of stuff, but here we go.

Packing list
I was driving from Chicago, so I brought A LOT. Better to over do it then be wishing I had something, below is a complete list of everything I brought. 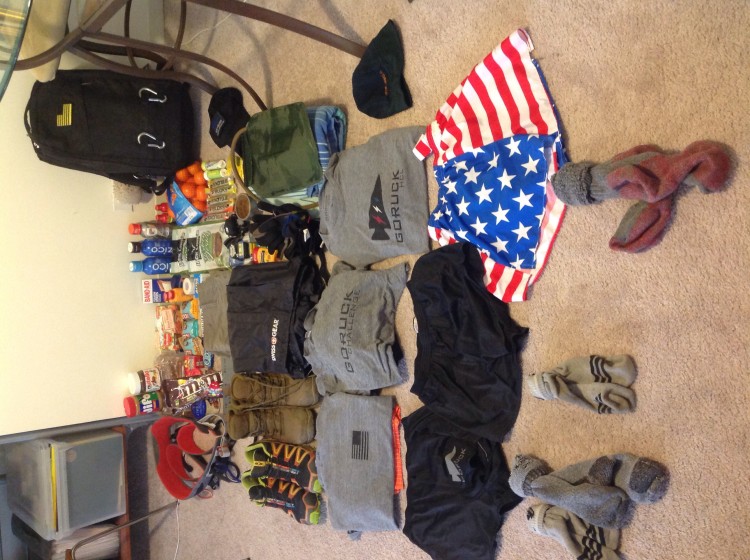 The Heavy
The heavy started at 5pm EST Thursday night. We arrived at Lincoln Park and met with Cade Machin, Cadre Paul and Cadre Logan. They gave us the speech, told us to get ourselves ready, it was go time.

We started with the PT test. 2 minutes max push ups, 2 mins max sit ups and a 12 mile timed ruck. I felt a little heavy in the first first two tests, but scored 66 and 69 respectively. Then came the ruck. Cadre Machin was the lewd pacer while Logan trailed behind, drop behind Logan and you were performance dropped. We set off, and instantly we’re spread out. Cadre Machin rucks like a wolverine on cocain, and only about 5 of us were able to keep on his tail the entire time. We lost a few people on the ruck and it was a pretty solid indicator that we were in for an awful night. 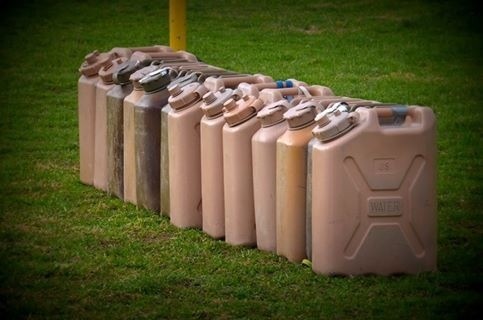 We arrived at a park where there just happened to be a nice log and row of jerry cans waiting for us. We regrouped, did a few things and of course missed a time hack. We were told to strip our layers off because it was time to get wet. We removed clothes and headed to the water. It was cold, air temps around 35 or below. Wg lined up facing away from the water, and were told to back up until we entered the lake. We stepped down into a icy, muddy wet lake from hell. I immediately cramped from head to toe but kept my breathing under control to stop shaking. We did bottom samplings, snorkels and some other work before crawling out of the lake and bear crawling shirtless and soaked through the muddy wet park back to our gear. We had 10 minutes or so to dry off, regroup and get ready.

We grabbed our log and headed off down a dark trail. I’m sure we were there illegally because lights were to be turned black and we were told to keep quiet. I’m not sure how far we covered, but it took a few hours. We moved slow, really slow along the single track dirt trail, with a few pretty steep inclines. Eventually we screwed up and had some log PT in the darkness, then back to rucking. Eventually we looped back out of the woods to the parking lot where we started. We ditched the log, and had an awesome lesson in building and traversing rope bridges. One of the cooler things I’ve ever done at a GORUCK event, props to Cadre Machin. 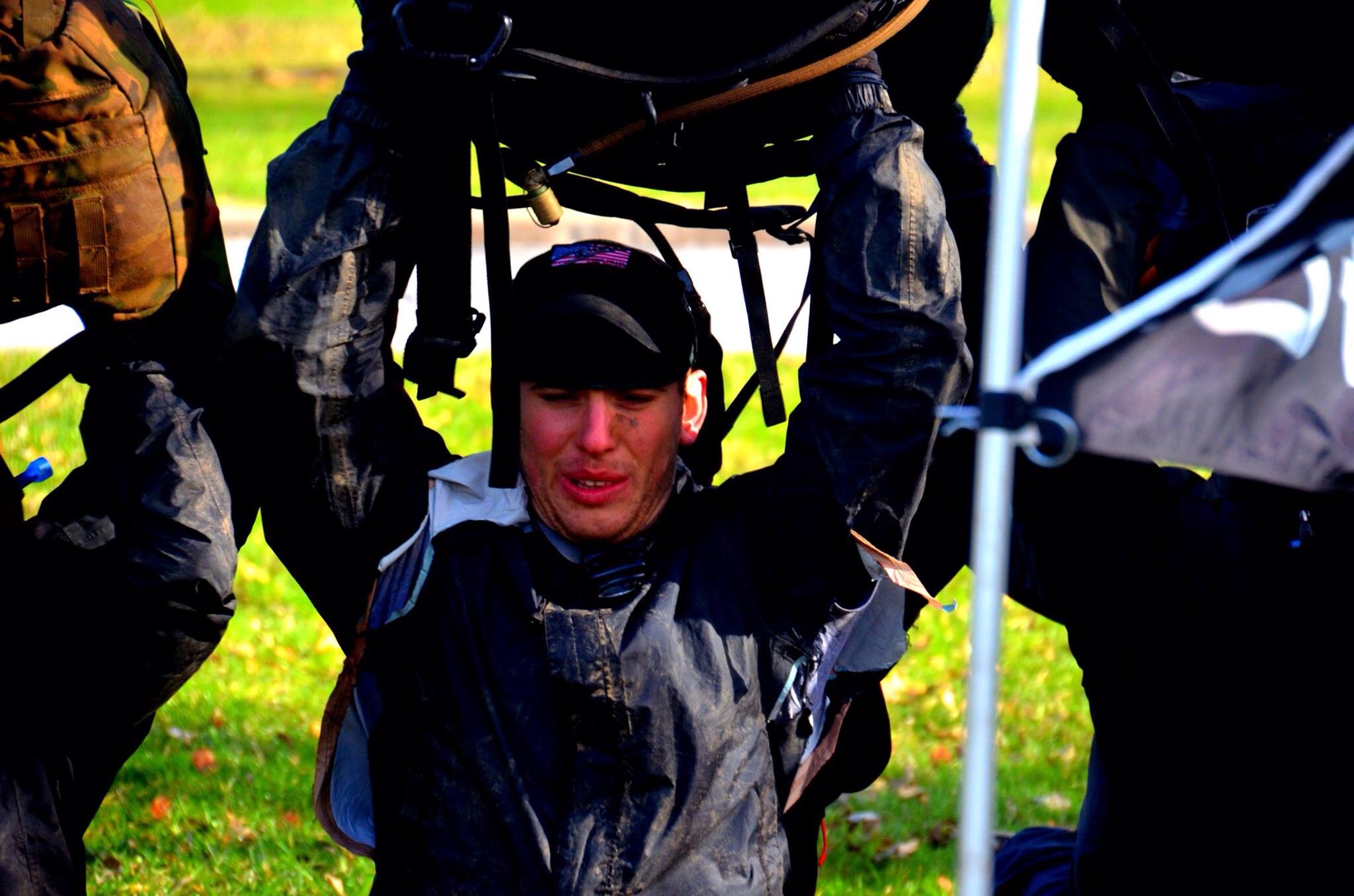 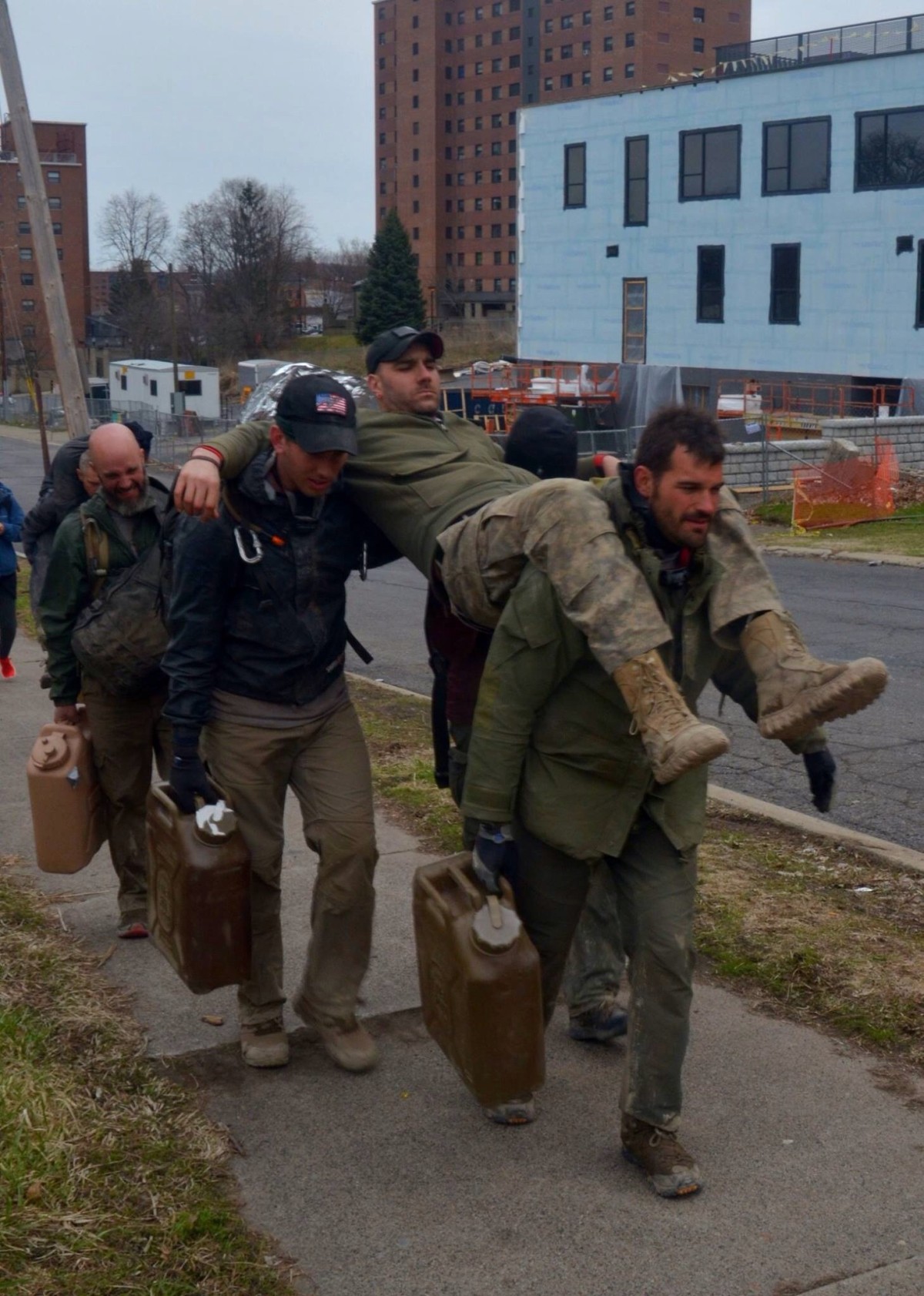 We finished our rope bridge and grabbed the collection of 10-15 jerry cans we had and headed out on a long movement. The jerry cans suck, they just freaking suck. 40-50lbs, they leak, they’re hard to carry, they just suck…so 10-15 of them really suck. This movement was my dark moment. We had to cover 8-10 miles, with casualties and jerry cans, while lunging every bridge we hit, and doing ranger push ups every time we came to a fire hydrant (IED). This never ended, I fell asleep every time we stopped. We’d move 10 feet, set everything down. Move 10 feet..set everything down..for 8 miles. I buddy carried someone for a mile, stupid on my sort, let your team help. Finally, after the sun came up, we came to a grassy park.

Israeli relays went down at the park after some PT. Basically Israeli relays are partner races involving bear crawls, low crawls, partner drags and more, and they suck even worse than jerry cans. We did this for at least an hour, and of course screwed something up (I forget what), and were rewarded with 400…I repeat 400 overhead presses, which we completed in it’d entirety before heading out on another ruck. We knew we were getting close to done, so it was a perfect time to get lost! We went a few miles off route which caused us to miss a time hack, casualties! We carried them several miles back and reached the base of the 1/2 mile hill leading to the park. We were given all our jerry cans back, more casualties, and suffered through the last push up the hill. We reached the perceived finish point, only to be out through an hour smoke session on a brutally steep hill. It..sucked..a lot. Finally, PT was done (highlighted by 140 burpees) and we got our Heavy patch. One down, two to go!

Me and two other HCL guys left the second we got our patch, no time for talk. We raced back to their house and showered, changed and put our clothes in the laundry. We had about 2.5 hours. During this time, we ate, fixed gear, packed for the challenge, tried to sleep (I called it controlled hallucinating) and regrouped. I didn’t sleep, but if you do, prepare to face Demons when you wake up. You’ll never believe how much your body will hurt, but just SHOW UP to the challenge, that’s all you have to do, SHOW UP.

So we did, 10 of us returned for more. We met with the challenge group and were immediately split from them and led on a mile or so “warm up” aka “let’s see how fast we can run a mile after a heavy to see if we can break anyone”. We then joined up with the challenge group, did some tunnel of love, taught them the rope bridge we had learned earlier, did some PT (around 400 monkey fu**ers and a ton of thrusters) before heading out. We rucked a few miles to the duck pond and headed into the water. We did some bottom samples and other water PT, then had to repeat it all because someone didn’t wear their ruck into the water. Afterwards, we changed clothes and hit the road, time to log some miles, jerry cans and all. We stopped a few times for PT, and went into the woods after about 7 miles to learn about how special forces operators stay awake while doing recon (we all fell asleep…guess that gap hasn’t been bridged yet). We then rucked back the way we came, did more PT, some more Israeli relays, more PT, and finally got our challenge patch, two down, one to go, time to party.

After the challenge we repeated the same pattern of cleaning gear, resting, eating etc. still no sleep, but the end was in sight, we showed up for the light, did some light PT, rucked about 8 miles round trip, and finished by splitting into two teams, clipping a balloon to our back sides and having bear crawl balloon popping battles. Afterwards (TEAM WAR MACHINE won btw!), we heard what we had been waiting for….”congratulations on finishing the goruck light and HCL”. We did it. We didn’t freaking quit.

HCL is a monster. The heavy is awful, it kills you, it drains you, it makes a C and a L feel like the worst thing ever. If you’re doing HCL, don’t go solo. When you rest, rest with a buddy, drag each-other to the start of the challenge. 100% of the people who showed up to the challenge from the heavy have finished HCL! JUST SHOW UP.

Pack smart, bring tons of food, eat like crazy and be prepared to hurt. There’s no way it’s not going to hurt, it’s going to be awful, but you paid for it right?

Demons. When you meet them? Grab a buddy, I hallucinated so bad I was talking to someone’s shoes. I fell asleep standing up and collapsed, I heard voices, I saw things, there were times I physically could not open my eyes. When it hit, I put my hand on the mans shoulder in front of me and let him pull me along. I ate, drank and did whatever need to snap out of it.

Boots n pants n boots n pants n socks n boots n pants. Yeah you get it, wear pants, good well tested boots and strong socks, I wore Darn Tough, changed them once in the heavy, once in the challenge and that was it, zero issues, no blisters, no hot spots, no anything. Don’t overthink it, try stuff, if it works it works, if not then rethink it and try again, it’s not that complicated. 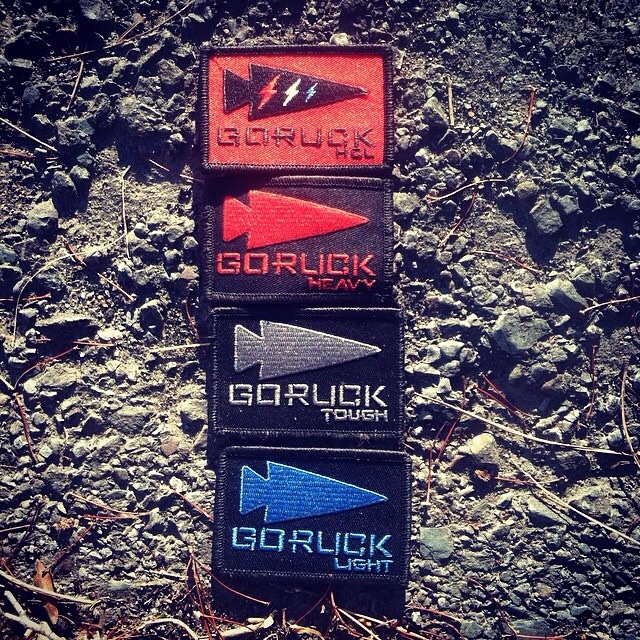 So can you finish HCL? You have to want it. If you show up to the heavy and think “I’ll try to challenge if I feel ok”, you’ve already quit. Go in with a plan, and make finishing the only option.