Robb McCoy aka Mohawk, from N. Attleboro, MA, founder and owner of FIT Challenge gave us something to talk with his fourth race event on April 11, 2015 in Diamond Hill Park, Cumberland RI. Whether he is raising money for chronic disease research or getting someone off their couch, making a difference in people’s lives is his bottom line.  F.I.T., standing for Fortitude, Integrity and Toughness, the 3 main strengths which he says is the key to achieving fitness goals, particularly, an obstacle course race. His dedication and passion to begin a local race in the New England area has landed him a place in the top five local OCRs, with his first event less than two years ago in August 2103 with over 1,200 participants. Able to stay alive in this now very competitive sport as races die off every year, FIT Challenge helps to define the reason why OCRs began in the first place and not just by creating a challenge for all that participate but also by staying true to its roots, long before it was called OCR.

April 11th 2015, it was about 50 degrees and windy; the New England Spahtens were rolling deep on the moderately brisk Saturday morning, were over 1,100 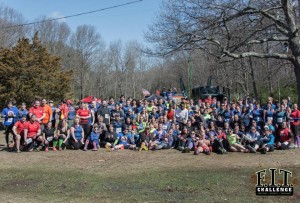 people gathered to conquer F.I.T. Challenge, embracing the new slogan #DOEPICFIT. McCoy prepares the first wave of men and women athletes for takeoff. There was no prize money or trophy on the line, yet the elite lineup was deep and came to play hard.  I was amongst these athletes; I was feeling good and had high expectations of the outcome, despite my torn shoulder.  I really didn’t know what I was headed into, being that this was my first F.I.T. Challenge, nevertheless, the vibe was extraordinary and all that you would expect from a New England race, for it is one of the best regions in the U.S. for OCR events.

The distance, 3.6 miles.  McCoy informed us that the course way dry and that there were no water crossings.  My first thought was, “Awesome,” because the water would still be freezing.  My next thought was that it was going to be a quick course but I was wrong.  The terrain was very rough and technical.  The first mile was chock full of rocks, the ankle breaker stage, which meant it was essential to know your next step and plant it safely.  We were not running on a ski resort mountain yet we managed to run up close to a thousand feet of elevation.  The climbs were steep, often rocky and quite challenging and there were more than enough obstacles scattered throughout the course. The 50lb wreck bag sandbag carry was outright brutal for the first wave, but later on, some distance was chopped off that climb, thankfully.  Despite these challenges, my race was running smoothly, still in podium contention until the last 1/2 mile or so. 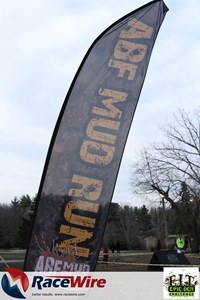 South Jersey’s own ABF Mudrun collaborated with F.I.T., as part of the #ocrunited movement and they had a small section on this course; an area that ABF founder Chad Mason calls Jarhead Playground, which comes equipped in every one of his events, and which you may have seen me write about in the past.  This area is a condensed obstacle packed section, with usually around 10-12 of them back to back.  There were not quite that many at F.I.T., however they did have 2 different custom designed 20ft metal rigs, and all participants had to do both.  These rigs had a large variety of strength, hanging and grip challenges, some that I have never even seen before.  New obstacles are always a new challenge.  I was passed by several as my injury came to play but I was confident I would gain that ground back.  But soon after leaving the playground, I came to the crossfit area and this ended up being quite the humbling experience, that is, I was thrown a curve ball, I was not ready for it and it cost me a lot.  This has not happened often in all my years of competing.  Burpee broad jumps for 75ft, directly following the 95lb atlas carry 75ft back and forth, right to 50 reps of a 45lb barbell shoulder press.   I completed every obstacle in Jarhead and the crossfit pit but I also felt defeated, as around 10 guys passed me between both sections combined.  It’s discouraging yes, but I also had this burning desire to come back and beat this course.  I now have a score to settle with F.I.T. and I thank McCoy for that. He showed that just some crafty variations can humble the best of us.  I will work on my return.

Although F.I.T. is a local, they do have competitive pricing.  Sign up early and pay $50 but sign up late and you could be dishing out up to $110.  You do get your money’s worth, with a one of kind wreck bag finisher medal, a good quality F.I.T. finisher tee and an awesome headband.  It also feels good to know that a generous portion of the proceeds goes to charity, about 4-5 thousand per event.  One of the most unique qualities of this race was the option to do multiple timed laps for an additional $10 a lap.  If you complete 5 laps, you can compete for a chance to win a plaque.  There is a kid’s race for $17 and spectator passes are just $7, basically there is something for everyone.  Affiliated with OCR Gear, F.I.T. challenge is also an OCR World Championship qualifier.

Special thanks to Adrian Bijanada, OCR Gear and Icebug for coming out and getting some new and awesome Icebug shoes on our feet that day.

Chin Up: Nearly naked but not afraid of the Abominable Snow...