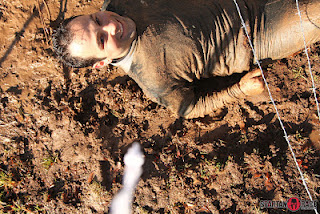 This is part II of my recap of the 2012 Georgia Spartan Sprint-Hurricane Heat. Last time around I was talking about how I did not want to embarras myself as the only one not able to climb a rope. If you missed it…Quick-Go back and read Hurricane Heat-Part One.

So there I was, cheering my new teammates on as they were making their way up the rope. There was a lot of yelling and screaming as all of the teams are quickly going up and down these things with relative ease. Some guys don’t even use their legs. They just pull themselves up on arms alone.

Ok-My turn. Immediately, I am relieved, as there are large knots on the ropes to step up and onto. I am able to pull myself up and stand on each knot with relative ease until I get to the last one. My arms are starting to give and I can’t quite ring the bell at the top of the rope. I swing wildly several times before finally nicking it with my knuckle. The nicking still makes a nice loud CLANG and I descend down.