I want to start off by saying Thank You to X Racewear for sponsoring me and allowing myself and Team Mud and Adventure to be one of the first to try out their awesome product, also to make me a member of their team and promote their brand.

All of us who run in OCRs, at some point or another, can have a legitimate complaint about bib numbers completely falling off or perhaps just a safety pin or two or three popping off, or maybe even stabbing into us while completing an obstacle. All this, more than anything is a nuisance, that is, nobody, more so with competitive runners, for time is of the essence, wants to try and find ways to keep their bib numbers intact and on display while running through a course. You might find yourself slowing down to reinforce the safety pins or sometimes just forget about the bib showing and either tuck it away in your shorts or leave it where it falls, which is not the worst thing but then you risk the chance of your race day photos being lost in the shuffle, and where you will most likely end up fishing through hundreds of photos from the miscellaneous pile. You could just forget the bib entirely and draw the numbers on your forehead or chest which is a perfectly fine method of displaying you race number for the world to see, yet on the other hand, just about anyone you know who runs the tough OCRs, especially in the middle of the summer where there is a lot of mud and several water crossings, can tell you that even Sharpees, which is supposedly a stout permanent marker, comes off pretty easily and your number would be nowhere to be found. Lost bib/race numbers are just one of those things we must embrace as part of our race day misfortunes. 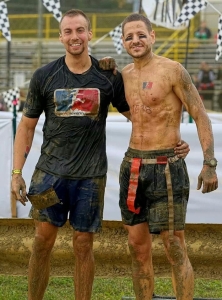 It was not until the middle of 2013 when the X-Racewear shorts came to the scene with the slogan “No Safety Pins” and presented us with the answer to all our bib/race number glitches, as their shorts were made with a built in pocket and perfectly designed to hold bib numbers.  Their arrival was the second coming of _____, whatever it is you desire to fill the blank with, but let me digress. I initially wore them at a MudMan X event in October, which gave X Racewear the opportunity to not only see how they withstand the obstacles at a competitive OCR event, but if the shorts get the approval of an Elite OCR runner who would certainly put them through the true test.

First thing is first. They are a lightweight, quick drying, comfortable material with the extra added inner brief support layer to help keep your man parts all together, which are all the main qualities one looks for when in the market for good running shorts. Currently they only offer their shorts in all black and retail for $39.95 at shop.xracewear.com. It’s a steep price for a pair of shorts from a newcomer in sports apparel but they do stand-alone in offering us the only one of its kind, which may be more of the reason why it’s worth attaining a pair. They are made really well and sturdy; the elastic waistband is strong and snug, the drawstring, in a clever lime green color, is thick and the length, in my opinion was just right, with a 7” inseam and the size medium measuring, from the top of the waistband to the bottom of the shorts, at about 17.5in. A must have for me is the small zipper pocket in the rear center of the shorts located just under the waistband. It’s the perfect for size for a couple of gel packs or a bunch of SNAP infusions, an energy bar/energy blasts, a marker, money, ID or maybe even and MP3 player for those not planning on not getting wet or rolling through mud. .

Last but definitely not least, I cannot leave out the built in 6” x 8” bib protector/pocket with a velcro strip, located on the left side, bottom portion of the shorts. This is designed to keep your bib 100% secure, so you don’t lose you bib in the middle of a race and leaving it visible for spectators photographers. When I first saw the shorts, I observed the thick black mesh as the front of the pocket and was concerned because the bib I wore that day had black numbers and were a little difficult to see from where I could see. I was concerned that this would be a major oversight on the part of X-Racewear and that they wouldn’t work out well. Turns out, after viewing my race day photos, my concerns were voided and the numbers were still quite visible, well at least when they were not covered in mud. If the black numbers came out fine then I am certain that any other color will be more than sufficient. Overall, the pocket was perfect, the bib was fully intact and the mesh held up great with no rips or tares, but most impressive was that I did that with #No Safety Pins.