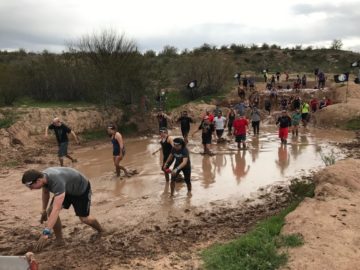 I would say that out of the Spartan races I’ve ran so far, this one had the most uninterrupted running, which I was a big fan of. I find that it gives my upper body a nice break from the obstacles, and I’m not nearly as burnt out by the end of the race (I even had my first burpee-free race at Saturday’s Sprint!). As far as the obstacles went, I think they made some solid choices for last weekend, even if I did miss the sled drag and the rope traverse. They had some of the classics much earlier than I expected (rope climb, Herc hoist), a dreaded one (the tire flip, 200 lbs for women and 400 lbs for men), and included the new ones they premiered last month (Twister and Bender).