CONFIRMED! Elite obstacle racer, Hobie Call, will be in attendance at
BattleFrog’s inaugural Atlanta race, May 31st. Many of you know Hobie, but for those who do not, here are some Hobie fun facts: 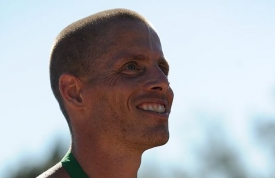 MIAMI, FL (May 27, 2014) – Leaders of BattleFrog, the new fun and competitive obstacle course race (OCR) series created by former Navy SEALs, have announced that elite obstacle racer Hobie Call will be in attendance at BattleFrog’s inaugural event. The organization’s first-in-the-nation event will be held in metro Atlanta on May 31st and June 1st.

Call, who will be joining the more than 2,000 racers who have registered for the event, has 41 first place finishes to his credit. He holds the fastest known time for lunging a mile and is a 2:16 marathon runner.

BattleFrog, designed by Navy SEALs, offers challenges for both veteran OCR racers and newcomers alike. Designed to test the strength, skill, and determination of any athlete, the event will feature three unique courses, a series of SEALs-themed demonstrations and activities, and a festival atmosphere that promises to be fun for the entire family.

“Why do we all love obstacle racing?” Call has been quoted as saying. “It is because it’s exciting, challenging and fun all wrapped into one event.”

“We are excited to have a racer of Hobie Call’s stature join us for what promises to be a great day,” said Don Mann, BattleFrog LLC CEO.  “His participation is a sign of the growing enthusiasm for BattleFrog and recognition of our group as a provider of high-caliber OCR events.”

In Atlanta, race events will be offered on both Saturday, May 31, 2014 and Sunday, June 1, 2014 at the Georgia International Horse Park, 1996 Centennial Olympic Parkway in Conyers, Georgia. The weekend will feature never before seen obstacles, including:

Each day will begin with the playing of the national anthem and a salute to the American flag followed by a military helicopter fly-over. Attendees will have the opportunity to interact with SEALs, enjoy multiple attractions within the festival compound, and witness a live SEAL demonstration involving a military helicopter and canine security teams.

After crossing the finish line, participants in the metro Atlanta BattleFrog race will be able to replenish and rehydrate in the Kill Cliff Recovery Zone. Available in three flavors – Blood Orange, Pomegranate-Watermelon, and Lemon-Lime – the drink has been designed to aid in recovering following a tough workout.

BattleFrog founders have announced that eight percent of the profits generated from the series will be shared evenly with several SEAL-related organizations. Those organizations include the Foundation for Navy SEAL Veterans, the Navy SEAL Foundation, the Navy SEAL Museum & Memorial and Navy SEAL Trident House. This direct support honors the fallen, promotes the SEAL legacy and supports the families of those who served.

Georgia Governor Nathan Deal recently gave BattleFrog the state’s highest honor and declared May 31, 2014 as “BattleFrog Day” in the state.

A Closer Look at the Reebok All Terrain Series