Pulled in the parking lot around 10am, looking forward to starting and completing my longest race to date, a 10k OCR. Last year a 5k and with the extra miles added it was truly going to be a long and grueling race. With my buddy Gabriel, we set off to conquer this course. 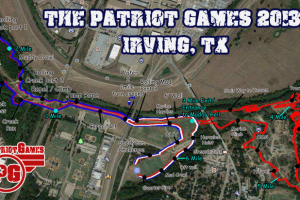 A little background, about a year and a half ago I needed a change of lifestyle. Heard an ad on the radio for a mud run set for September, The Patriot Games. I signed up for it and it motivated me to get back into shape and get back to being that young fit man I once was. (I’m still working on that). When I arrived to the event I waited in anticipation for my wave to start, and when it did get going I learned real quick that I had to learn to pace myself better. And that part of the race had long wait times, which made my race a little long. But I completed it, I felt good, I felt accomplished and was hooked. Starting this year I had of goal of ten races I already met that goal and looking for more. Now I felt like I came around full circle and ran the same race that started it all.

This year with a new venue and a unique concept that would accommodate all different levels of competitors.  This race was a 10k/5k; meaning that at the 3 mile mark you could go right and finish the race or go left and run 3 more miles. It was kind of like one of those chose your own adventure books that I read as a child.

Coming to the start the Emcee warned of the punishment if we fail to complete a challenge: 10 push-ups, 10 sit-ups, and 10 jumping jacks. And then we get started gong through tires, and 5ft walls and a cargo net, all before the first mile. The second mile was the trail/mud run. (It had rained on Thursday and Friday before the race, which is the way I like it). 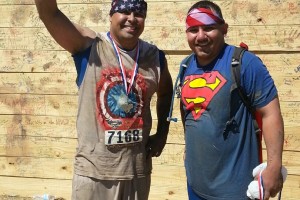 The third mile was consisted of a rock crawl, jump rope 50 times with cut up battle rope, and a tire pull. Getting close we see the split for the 5k/10k and I had to choose my own adventure. Gabriel and I go left for the 10k and head to the Stairway of Heaven and the tractor pull, log carry, sand bag carry leading to a gigantic hill we had to climb. Entering the 5th mile I start to see a problem there was a 7ft wall, the Marine climb, and a water station that didn’t have volunteers. I don’t know if anyone has encountered this before, but it was the only problem I saw throughout the course. After exiting the back half of the course coming into the home stretch we get to the Hercules Hoist, a grenade toss, where you get one shot to toss a weighted ball into a barrel and if you don’t make it there was a punishment, I had to do the punishment. From there we get to the 8ft wall, where we told that the men couldn’t use the red boosters to get over the wall, after we get over the wall we hit the mud crawl and water pit and to finally the 10ft high warped wall. With a little help from other runners I was able to scale the wall and conquer the course.

Overall the race was excellent. Other races were more running than obstacle, but this one had the right mixture. You didn’t run to long before the next obstacle. The wave times were spaced nicely so that there was little to no wait times at each obstacle. Each challenge was hard enough for you to complete but not hard enough to where you can’t complete it and had to settle for the punishment. The Emcee had everyone’s energy level up and motivating people to get up the warped wall. It was an awesome event, well organized (although I picked up my packet the day before so I don’t know how the registration tent was like). It was a good race, an excellent race, AN AWESOME RACE!!