The Death Race… oh how I love and loathe thee. But I’ve come to a final conclusion that as long as my goal is to try to win it all and my name is Junyong Pak, I am only going to end up gravely disappointed.

If anyone was surprised or upset that I stopped or concerned that this event broke me, don’t be. I was 60 hours in when I excused myself, in an angry but still a state of perfect mental clarity with body holding up shockingly well, ready for a strong finish and still eyeing a podium spot. But the final straw that irritated this camel’s back was however, in my clumsy haste to move on, failing the ankle hop / memorization challenge not once but 2 times, which left me only 65 minutes to run the 5 miles roundtrip up to Joe’s peak to study/memorize the oven (with my 40 lbs pack, in the torrential rain), successfully answer this test (which I was no longer confident about after having failed the other test 2 times), and run the 3 miles to the mine by the 10pm cutoff.

This was just about 9pm on a Sunday night, two and a half continuous days after the 9am start on Friday. Due to a series of rather unfortunate events and “special treatments” for the “2x World’s Toughest Mudder” it was clear I was not going to make this last cutoff. I was given consolation that even if I missed the cutoff I could go on as an unofficial finisher but I knew what that meant; getting bent over a rail with perhaps another 4 hours of farm chores just to have the “privilege” of continuing on and finishing unofficially. I did some soul-searching and realized I had proven everything I needed to myself. I had been screwed over under the microscope-level scrutiny of a man who wanted to see if he could break me time and time again and I had answered each time. So I apologize if the following comes off as being negative or callous but it is being said in the context of my own perspective; an unofficial finish did not hold enough value to me to warrant making the sacrifices to continue on. I couldn’t have even claimed it on my racing resume. What’s more, my poor sleep-deprived girlfriend had greeted me and sent me off at every single challenge I can think of and it was clear that she was going deprive herself of whatever it took to support me even if this thing went on for another 12 hours. I was more pissed off that this race was doing that to her and others like her than I was about getting the VIP treatment. 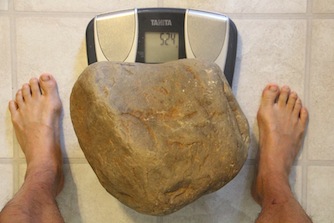 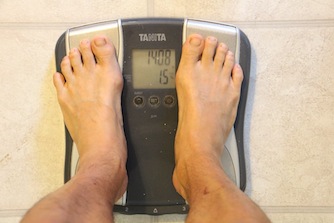 This photo is of my 52.4 lb rock that I retrieved after the race. It was the third rock that I presented to Joe after he denied the other two because they “weren’t up to par for the 2x World’s Toughest Mudder”… despite the fact that at 140 lbs I was perhaps 3/4 the size of the average guy out there, that I may have had the smallest arms of the entire men’s field, and that I was carrying a rock over two times as heavy as the average. And I don’t think it would be a stretch to guess that mine was probably the heaviest rock of anyone’s that would go on to Chittenden. This rock, in addition to my 35 to 40-lb pack, would have to travel with us, in front of us in our arms, over thousands upon thousands of feet of elevation change covering 15-20 miles of rugged mountainous terrain, several of those miles even through complete bushwhack, and even under barbed wire.

It’s practically impossible to put this into perspective for anyone who wasn’t there, but after some thought the closest thing I could compare this single stretch of struggles to would be hiking Mt. Katahdin, including knife’s edge, roundtrip, 1-1/2 times, with a 35-lb pack, and a 52-lb round rock in your arms, after 36 hours of heavy manual labor and hiking… followed by 3 miles of swimming, another 10 miles of hiking in an all-out downpour with half-inch hail, trenchfoot, and oh so much more.

That said, I have the utmost appreciation and respect for the Death Race and would endorse it to anyone looking for the ultimate physical/mental challenge. But let me be clear on this; The Death Race is not designed to be a fair race, but rather a personal challenge. If you go in with the attitude of trying to win you will almost certainly be disappointed. You will be frustrated, that is the point. No two people were presented with the exact same series of challenges as each was at the mercy of the subjective whim of the race director gods. Sheer chance and moral code had more of an influence on the finish order than capability here. Such as with this rock, I had zero chance of being a contender. And as it would turn out, I wouldn’t even have a chance to finish. At two points, I even had to downgrade my rock just so that I could go on. I had reluctantly signed up again on the promises that this year would be an all-out race against the clock and that would once again turn out to be a Death Race crock of crap. Well played, Sirs. That said, this was my last dance with the Death Race, and that is a promise on my life. 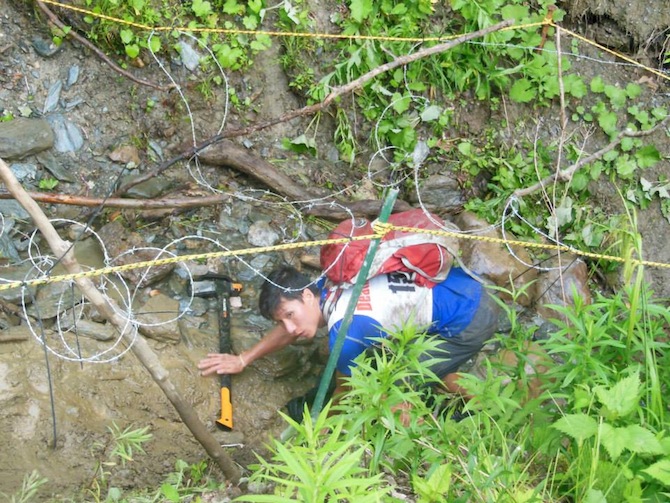 History Repeats Itself: A bear takes on the Beast