OCR’s, to many, sort of fall into but are not limited to a few separate sub-categories:  Mud Run, Fun Run and Competitive.  MudMan X, a fairly new name in the world of OCR is somewhere in the middle of those.  They offer various and challenging obstacles, some unique to their own race and some that change with each race, and non-specific distances ranging from 5K-8K, leaving present the eleme

nt of surprise, never knowing what you will get until you get there.  They even have their own slogan, “Conquer the Elements,” which is basically implying that when you enter their course, you will be faced with man-made/generated versions of nature’s 4 major elements at their worst, Earth, Wind, Fire and Water.  No medals are rewarded when you cross the finish line, but there are a variety of different colored MudMan X headbands to choose from, a comfortable light cotton T and beer are available for you instead.  Wall photos are also at your disposal. Unfortunately, you have to dish out some bucks ($20) to get a copy of them, as well as any other photo of you taken on the course.  It’s a small price to pay though, considering their registration fees are lower than other less appealing races and they are a family owned and operated business, but business is the wrong word, because unlike several other races, they are not completely profit driven and still care about the participants as a whole and the sport itself.

For the spirit of Halloween and the alarmingly rising and growing demand for a zombie apocalypse, on October 19, 2013, in New Jersey’s New Egypt Speedway, MudMan X conducted MudSpooktacular, a four mile zombie infested, obstacle course run (zombies being one of those obstacles), designed for the whole family.  Like all zombie runs, you begin the race with a life belt, which essentially is a very light white adjustable belt and attached to it, by velcro are three orange flags/long strips, which represent your brains/lives.  You run the course accordingly, completing all the obstacles, while dodging and out-running zombies as they try and snatch your lives off your belt.  You must finish the race with at least one flag to be considered a survivor.  If you don’t finish with a flag, then you become one of them.  Thousands of people came out to participate in this fun/theme run and all were eager to take on this challenge.  It was a flat course so it moved very fast and it also made it family friendly.  Another reason why this event kid/family friendly was that the majority of the zombies were your classic zombie, that is, slow moving as opposed to 28 Days Later rage virus zombies, which are fast moving, immensely more intimidating and can be quite scary and perhaps traumatizing to some.

The course still had traditional MudMan X obstacles and National Guard soldiers yelling and pushing you in MudMan X fashion, to help them stand up to their name and growing reputation.  The designers even had some mercy and decided to raise the 30,000 watt live electric wires, (their depiction of lightening) high enough for runners to crawl under, but not without getting your body and face full of cold and very wet mud, another small price to pay for not subjecting yourself to what is otherwise considered by most, a very senseless, useless and ridiculous obstacle, especially being that there is no way to train for it.  The adjustments to some of the obstacles on the main course were to cater to ages eight and up. And since MudSpooktacular was designed for the whole family, Mudman X also introduced for the first time their FREE Mini X, which is a ¼ mile course aimed for kids ages four-seven, and where parents have to run with them. This way everybody can go out and have a great time together.

Now in a happy, family, fun and journalistic approach to the race, MudSpooktacular gets a thumbs up and I would recommend it for everyone including my own kids.

For a competitive elite runner perspective, the view looks a little different.  I entered this race with confidence, not because it’s 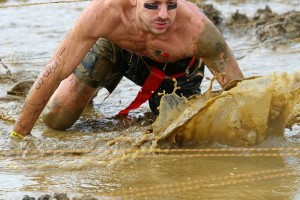 considered a local race with less competition but more so because I have been training hard, running and competing in races 2 or 3 times longer and 5 times harder since my season began in March.  I did not go into this with huge expectations, nevertheless, they had an elite wave with prize money so I knew there would be some guys coming out that meant business but did not expect anything I couldn’t handle.  Under the assumption of the rules, being they were never posted, displayed or laid out to us at the start line, which is an outright mistake when you are dealing with prize money, I proceeded as if it were other zombie runs, wherein as, you had to finish the race with at least one flag to be considered eligible for awards/prize money.  When it came down to the race and the first few packs of zombies, I did everything in my power to keep one flag.  I would slow down to try and dodge 2 or 3 zombies at the same time, stop my momentum/forward progress and often sprint hard after that until I was safe, exerting an extreme amount of energy.  Meanwhile, I watched 3 other guys just run right through not even considering their flags, which helped give them an edge because of sustained energy, in addition, a substantial enough lead, and with the obstacles not being extremely tough, I could not gain the ground back in places where I normally would.  In the end I had to watch 3 guys walk away with cash in their hand.  I’m not saying that they didn’t run well or whether I would have won first place but if I knew the rule that you didn’t need a flag to be eligible to win and ran without considering them, I can pretty much guarantee the results would have been different.  So my only tiff here is, if an OCR event is going to have a competitive wave, the planning needs to be well thought out, the decisions more solidified and the organization, on point. Otherwise, there shouldn’t be a competitive wave and I am OK with that as well, just as long as it is known in advance so one knows what to expect.

Get Lepo (dirty) at the Makahiki Challenge