As I prepare mentally for a race, I try not to think of what the time or the distance will precisely be.

I imagine myself running for an approximate duration but I try to never look at my GPS watch. It is especially important in Spartan Races particularly on the upcoming Beast.

Getting ready for the Super was just pure excitement. I had just done the Mud Hero 2 weeks earlier and had to put the brakes on to do it at my kid’s pace; I was more than ready to let loose on this one! I also started a new DVD fitness program right about that time; I felt on top of my game and ready for it.

Also, more than anything, I had to be really cautious to not hurt myself on this race since I was kind of the team lead on the next race: Tough Mudder Montreal, coming up exactly a week later.

I will definitely have a blog that will discuss the sour victory that Spartan Race has had in the last couple of years: being victims of their own success-  there is a lot of people at these events, sometimes maybe too much. I registered to the first wave on this race again because of this; I learned from my 2012 races. Also, there seems to be a different atmosphere in the first wave of the morning. Racers are much more serious and in a competitive mindset than later in the day and I like that.

The location is beautiful for this race: it’s Mont Tremblant – a staple of nature in Quebec, Canada. The place is well known for his superb ski station but it’s a couple of kilometers further that the run was taking place, right next to the Mont Tremblant’s cross-country resort.

Registration flow was better. I need to mention this because the situation was completely the opposite during the Sprint a month earlier: a complete mess. I will say this however, after completing 3 Spartan Races this year, I am not impressed at all by how Trumin is handling these races: they are not on top of their game, the final time comes way too late,  the season pass holders didn’t know what to do with their chips and there’s no connection to Athlinks.com, contrary to all of the other races. Even when you try reaching out to Trumin, their support is really poor. Speaking of the time, we are never told when it is finalized; if you go back and look at your time now, I guess that your rank and exact time has changed (again). Spartan should reconsider the use of Trumin in Canada for timing; there are other way better companies out there.

So I got my chip and was ready to get on the starting line. The general atmosphere was great and I felt great. As the announcer started the countdown, I knew I was in for a lot of fun.

The obstacles were all top notch. The only one that didn’t work was a tree climbing obstacle that, I guess, for security reasons, was closed. They imposed a 30 burpees “penalty” for this obstacle. Speaking of burpees, this will be my worst race in all races done after finishing, missing 6 obstacles total! I even found a way to throw the spear between the 2 bales of hay. This was a disaster for me, obstacle wise. It also was my first encounter with that Premium Rig did with the monkey bars and rings. They do have a lot of imagination, it looked something like: ring, ring, ring, ring, higher ring, higher ring, lower ring, lower ring, weird metal stick (??), and something else I don’t remember. I was out at the metal stick thing. The swimming in the lake was really good which brings me to the volunteering at Spartan Races: are they awesome or what? The cheering and all. You really feel like you’re in good hands at these events. Also, did I mention this was taking place in a big mountain? The hills were steep and the course itself was unforgiving. Muddy and rocky as expected. 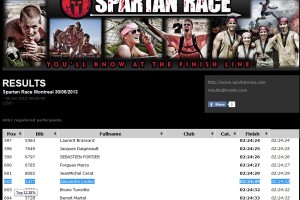 I was really proud of how it went for me, except for missing so many obstacles. Spartan Race has another one nailed down right on the spot. Thanks!