I have lived in NY all my life and since I could remember, I have been a Yankees fan.  I grew up in a great generation to be a Yankee fan, seeing the team win 5 World Series.  So naturally, I also grew up with the Red Sox being our main division rival.  As much as I dislike the Red Sox, I have respected them as a force to be reckoned with and respected the stadium they played in: Fenway Park. 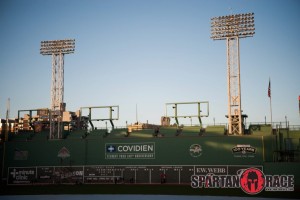 Fenway Park, one of the Big Three of Ballparks, has a rich history of tradition and was home to arguably one of the best hitters in baseball.  When I found out that a Spartan Race was going to be held in Fenway, I wasted no time in signing up.  I had never been to Fenway so what better way to see it?

Unlike previous Spartan Races, there would be no barbed-wire crawl, no fire, no water obstacles and no mud!  Instead, they would be replaced with body exercises, burpees and…stairs…lots of them!  Some of the exercises included ball slams, battle rope jump rope, rowing machines and hand release push-ups.  This race also saw the return of the 50lb sandbag! I was excited to see this as it had been a regular at the 2011 races, my first year of Spartans.  A nice touch was the baseball throw into an angled barrel.  Having played baseball all my life, excelling at infield positions, I wouldn’t have been able to live it down had I missed this obstacle. 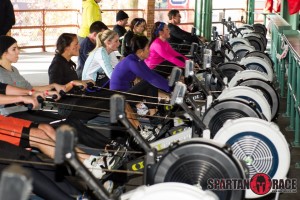 Also different to the regular format, only 10 Spartans took off at a time, separated by a minute before the next wave was sent.  After bear-crawling under, jumping over elastic wire  which could whip back quite fiercely if someone got caught on it (imagine if this were barbed-wire?), you were greeted by ball slams, a series of walls and a water jug carry…up and down stairs of course.  This style of running stairs followed by a body exercise then complimented by an obstacle would keep even the most athletic person gasping for air.  For example, after clearing a set of Over-Under-Throughs, you were greeted by 50 jump ropes with a battle rope followed by the Hobie Hop up 5 flights of stairs.  Want to catch your breathe?  Not a chance with another set of O-U-T’s and the sandbag carry up and down the bleacher stairs.

Having originally set out to just run for fun and stay healthy for the Texas Beast in 3 weeks, I would give into the moment and my competitive spirit and ran a hard race on Saturday along with a fun one with friends.  Sunday, I ran my first race with my long time friend and neighbor since it was her first Spartan Race and I wanted to be there with her the whole way as she tackled the course.  Again I thought I was done being competitive for the weekend but once again, the Wolf inside me took over once my friend Shaun Provost told me she knew I could improve from Saturday and put up a really competitive time.  Shaun would run the race with me, making it the fourth time we both would be on the course. 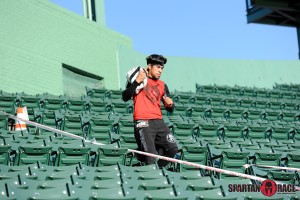 I decided that I would give everything I had left in me from the long weekend and not give in to any pain or exhaustion.  I kept telling myself that there were others out there who are in worse pain than I would be on that course and that it would go away once I finished.  I took off like I never have before, putting myself ahead of the other 9 that started with me and I kept it that way.  Absolutely no short cuts, no slowing down as much as I could help it and trying to keep my breathing under control and my mind calm.  I guess I focused too much at speed and control since I initially missed the turn for the ball slams but I recovered and completed my 20 slams and retook my lead of the pack. Over the walls I flew, carried the water jugs at a quick jog and made sure I completed the rowing machine under the two minute limit.  Every once in a while, I would hear the yell of “Go Freddy! Get that Bat” somewhere nearby as Shaun kept encouraging me to keep pushing.  After she caught up to me at the Green Monster, we made our way to “Burpee-ville.”  I was starting to really feel light-headed but here I knew was where I could really recover.  I hit the spear slightly off center, made my way through the traverse wall and took a running start at the baseball throw like any day in the infield.  Catching my wind here was key with the battle rope and Hobie Hop quickly approaching. 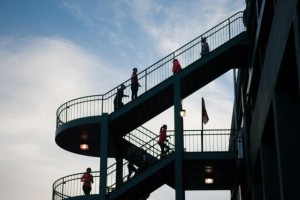 Taking the sandbag over my right shoulder, I just kept moving one leg after the other and breaking into a small jog toward the end. As I got to the bottom, Shaun lead the way to the 8-foot wall and the dreaded burpee station.  I enjoy burpees during a workout but during a race, I make it a point and a goal to go burpee-less during a race.  This mandatory station just seemed cruel especially after being successful on every obstacle.  This proved to slow me down quite a bit but Shaun was there to get me to finish my final 10.  As we made our way past the cargo net, box jumps and gladiators, I got my medal and felt more exhausted at a finish line than ever.

Shaun told me my time and at the time was in 5th place for men, 6th overall.  Later that day, one other person would best my time, putting me at 7th overall for the entire event.  I have to admit, I was devastated after hearing I was only a minute away from being in 2nd.  I kept replaying the run, trying to think where I could have made up time.  I kept asking myself, did I really give it my all?  Why did I wait until my final run to push myself my hardest?  To come so close to that ultimate goal and just fall short.  Eventually I would realize that in fact, I leave it all on the field and made one hell of a showing.  The amount I have improved over the past and now I can say I have a top 10 finish, a top 5 finish in my age group and the knowledge that I can push harder during races.  It would mean I would get that depleted feeling again at the finish line but I wouldn’t trade that feeling for the I didn’t give it my best feeling.  The congratulations from friends and strangers really helped put things in perspective and I am really proud of myself for this race and just knowing that I can continue to improve.  I have not hit my peak, nowhere near. 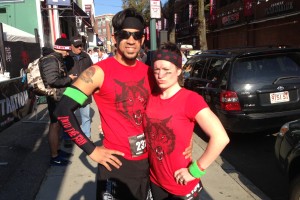 For those out there who have that dream or that goal or desire that just seems so far away, I want to let you know that no matter how far they seem, you can get closer to it everyday.  You must put the work in for it.  No matter how much the journey is going to suck, embrace it.  The amount of agony, pain, exhaustion or soreness you feel leading up to your goal will amount to nowhere near the feeling of reaching that goal you worked so hard for!  How do I know?  I got to get a glimpse of it, share in the experience.  Was it my experience? No, I didn’t reach my goal.  Shaun on the other hand did!  She not only took first place for the women on Saturday, she won it again on Sunday and put up the 4th fastest time the entire weekend!  Seeing her reaction to the news of her ranking during the afternoons, the nervousness throughout the day as she wondered if someone would overthrow her and seeing her accept both her awards on separate days really makes me appreciate the dedication she has put into her training and the attitude she keeps.  I cannot describe the exact feeling but I do know one thing…I want to know how it feels.  Here is to never giving up and working hard for it!

Fenway and Spartan Race: Thanks for an incredible weekend that I will never forget.  Top Ten Finish, four total laps, first visit to Fenway and the debut of The Wolfpack with Shaun Provost.  Keep a look out for us and more in Texas!

Check out the Fenway Video at http://spartanrace.tv/?v=boston.

Mud Guts and Glory: A Course Worthy of a Championship

GORUCK 4th of July Challenge (Dallas/FT Worth) – After Action...