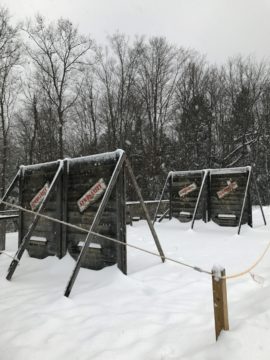 Race recap for the Frozen Four Miler, held by the Newbsanity team.

The run itself was supposed to be 4-miles and the swimsuit class was 2 to 4 miles. At registration, we were told that due to the snowstorm, the road portion of the course was deleted for safety (too much snow). Instead it would be two laps around the snow and mud covered trail AND all racers would do the two laps. We were told that would be about 4 miles.