As I drove down to the airport in Los Angles I thought to myself “What would this new adventure be”. I was headed to Utah to take on Man Games. This was a brand new challenge and it was their inaugural event. I was expecting from the name a bunch of big burly men with beards and lumberjack looking dudes to be at this event. When I got there I wasn’t sure what challenges would take place.

The website had described about 9 challenges that were going to take place – an Obstacle race, Sportsman challenge, Sports Challenge, Pig wrestling, Mounted Spear throw, Water relay, Human Slingshot, Giant Rope swing, and Fly Boarding. It seemed like 5 of these events were supposed to take place on land and the other 4 in the water. This seemed interesting to me since to seemed they were going to tally points to determine winners. 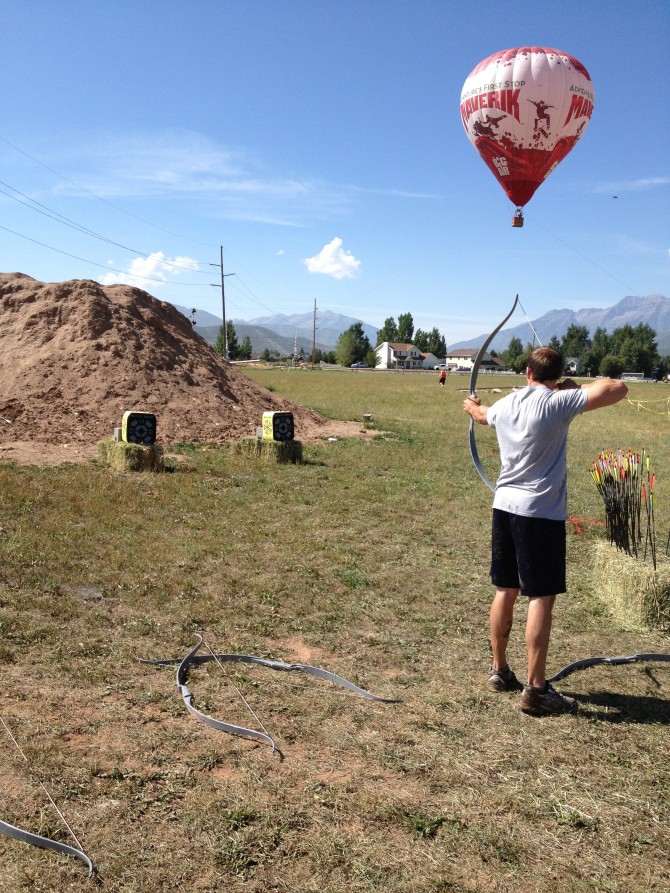 When I arrived there I was surprisingly shocked there were no signs to guide you to the event so at first from being out-of-town I had a hard time finding the place. I shrugged this off since it was their first event and met up with the team I had joined. The first event we took on was the obstacle course. It seemed a little different from what was written on the website. It seemed as though they combined the Obstacle race, Sports challenge, and the Sportsman challenge into one event. They had about a mile long course which included jumping over fences, crawling under razor wire, a basketball shot, Archery, Throwing an Ax into a block of wood, a Football throw, Tire flips, a Caber toss, punting a Football, and kicking a soccer ball into a goal. This seemed a little strange since from what they announced were they were all separate events.

I ran through the “Obstacle course” with ease and we waited for all the other people to come in finishing. They then asked us what we made and what we missed. They were having us keep our own scores. This also seemed strange and seemed as though they didn’t have enough volunteers out on the course since there were some places that had no communication to the competitors.

The next event was pig wrestling and yes it basically is exactly what it sounds like. They let a pig into an arena and your team of 4 people has to catch the pig and slip it on its back “or try to” and each teammate has to grab a foot and raise their other hand. This event was tough to judge in my opinion. Sitting there watching other teams compete, there was a flaw in the way it was judged. All the pigs weren’t the same, some of them just stood there and it took teams no time to get the pig. Other times the pig wanted nothing to do with people and just ran for its life. I see this being a very hard competition to judge since it all depends on what pig you got. 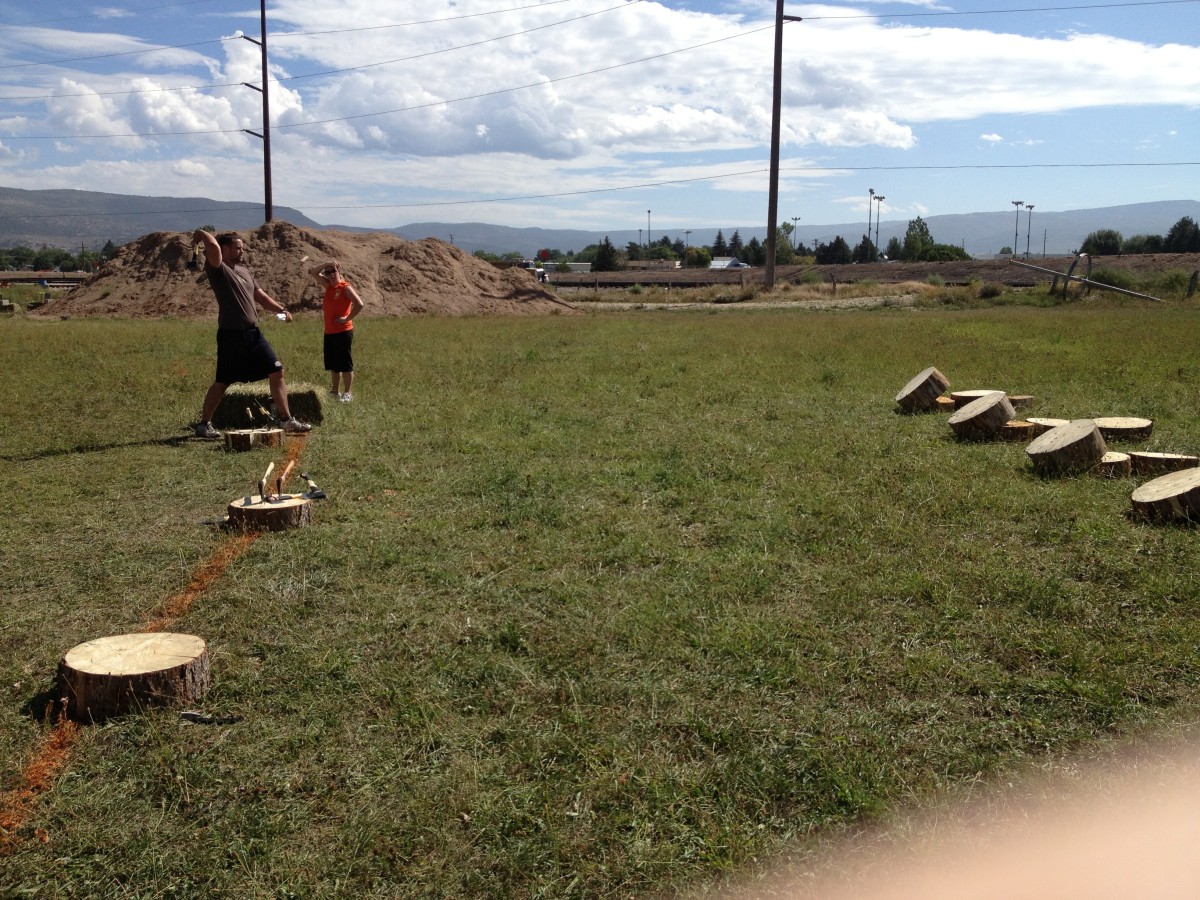 After pig wrestling we headed over to the mounted spear throw. You had to ride a horse and throw a make shift spear at a target. This seemed easy enough but was actually very difficult. They set up the spear throw on the right side so you could throw the spear with your right arm unfortunately I’m left handed…. I tried with my right arm and missed horribly but I will not make excuses I was pretty bad. Following the Spear throw we all gathered and got on a bus to head over to a nearby lake to take on the water events.

When we got to the lake we were told they do not have the human slingshot. The event crew was saying that they could not get the right angle with it and did not want anyone to get hurt. I can understand this and respect the choice they made by pulling this event. So there were 3 water events: the water relay, giant rope swing, and fly boarding.

The first event we did was the water relay. This consisted of a swim around a floating object in the water and back, then kayaking out and back, and finally paddle boarding out and back. This was actually a lot of fun everyone on your team competed at the same time and they timed each person individually then averaged your scores at the end. This event made the most sense so far.

We all finished and then headed over to the giant rope swing that was attached to a very large crane. They said this was a fun event but was not judged. So basically this was just for fun and no judging along with the fly boarding which was the last challenge / activity at this point. Fly boarding is a very interesting concept you are attached to a board that has a large hose going to a jet ski. The jet ski has control of how high you go and how fast you will come out of the water while you are trying to balance on the board with water shooting out of the bottom of it. This activity was pretty fun and you had to pay extra for it but I will say it was worth at least trying it and saying I did it. 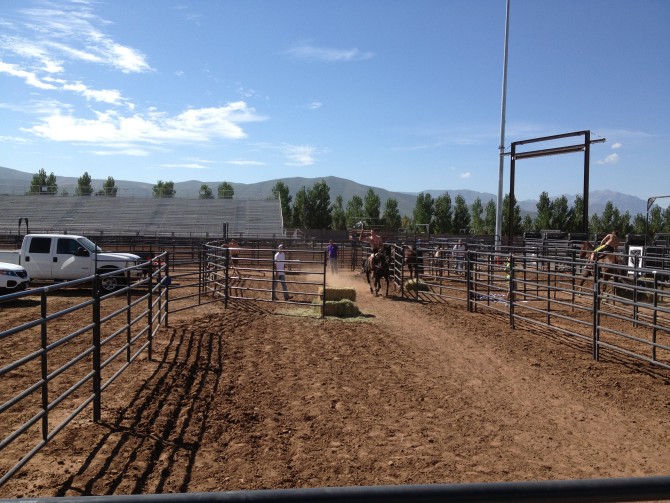 Finally we all got back on the bus and headed back to the main venue where online they said they would give out medals and announce the winners. As we all got back to the main venue it seemed like nothing was there and nothing was going on. There were no medals and  they didn’t announce any winners. It just seemed very anticlimactic. We asked if they had anything and they said nope. We all got little gift bags at the beginning but it just seemed like the event never really ended.

I guess for me I would have liked to see something to say “Hey you finished” or something to make it feel like you ended the event. They announced to us that they were going to tally up all the scores and times and announce the winners over their website in the next couple of days. I kept checking back to the website for the next week and nothing. Finally after a month and a half they had the winners posted. They had a great concept but I feel poor execution. They need to come up with an easier point system and hopefully get more volunteers to help them along the course.  Also, maybe make some of the events just a bit easier to to be judged. 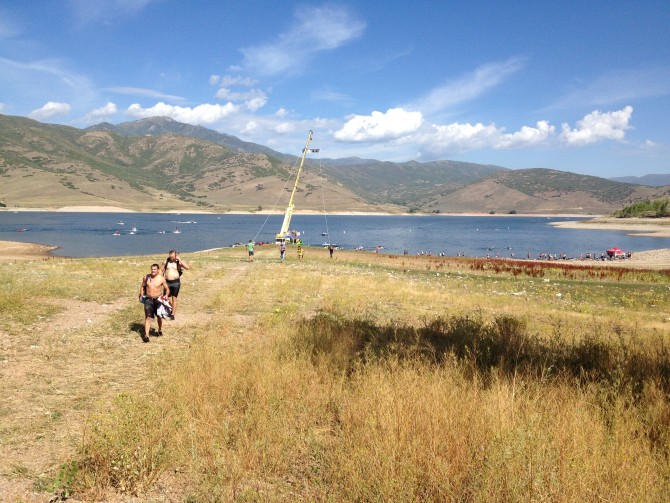 BEAST OF ALL BEASTS