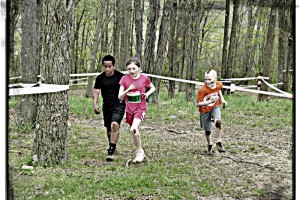 Hands down, no question, the highlight of my 2012 Indiana Spartan Sprint race weekend was volunteering at the Spartan Kids Race.  Spartan Race designs a separate obstacle course consisting of obstacles like small walls, cargo nets, and mud holes.  The older kids complete a 1-mile course, while the smaller ones do a half mile.  Let me feebly attempt to provide an apt description of the event from my eyes.  My first experience was handing out medals to the kids as they finished.  Brakken Kraker and Amelia Boone (winners of the Sprint) were at the finish line and I hung back a little further to catch the kids that ran past them.  This gave me a great view of the different range of emotions as the kids crossed the line.  Some of them were all smiles.  Some were utterly exhausted.  One kid puked.  A few of the youngest kids were crying, temporarily traumatized.  Some appeared to be in shock because of what they had just accomplished.  The most peculiar thing I noticed is that as most of the boys finished, they would glance at Brakken and me waiting with medals in hand, but then they turned toward Amelia to receive their medals.  I don’t know what that was all about it!

My 8-year old daughter raced in the second wave.  Despite my injuries, I got caught up in the excitement and decided to “rabbit” this race — meaning starting out in front of the kids and leading them around the course.  The emcee got the kids all revved up.  The energy in the little corral was palpable.  When the race started, they shot out like little bullets.  Read the rest of the race review here. The Death Race – What I Learned