Gladiator Rock’N Run came to Pittsburgh for the first time Saturday September 7, 2013. This race benefited a great cause, Talk About Curing Autism. (TACA) Approximately 5k in length, the course took place at the Steel City Raceway, a motocross track which consisted primarily of dirt and rock. Suprisingly hilly, this course took you up and down a series of many steep but relatively short hills. Definitely quad burners!!

The race was founded by Dan Clark aka “Nitro” of the American Gladiators. Awesomely enough, Nitro was there in person to explain the race course and get the racers pumped to rock it! He demonstrated the proper burpee using a block, which was one of the early obstacles.

The obstacles tested strength, mental focus, agility, and running ability. I thought all the obstacles were well designed and the course was no joke. At the last minute they added a swim which definitely tested the limits as runners were exhausted from running hills. Other obstacles included a sand bag carry through a very mucky trail (almost lost my shoe!! Thigh height water and mud!), a tire carry where you were required to do lounges as you held the tire above your head, typical obstacles very comparable to any Spartan Race, and a really killer water slide!

As runners ran the course, 3 bands were performing and you could hear the music throughout the whole course which rocked! Felt this race was designed to test many aspects of physical fitness. I liked that they incorporated burpee obstacle, strength obstacles, and lounges. Course was hilly and challenging but could be ran. There was a great spectator area with bleachers and it was cool because it was designed were spectators could view most of the course.

I’m glad they brought this race more to the east coast. Would definitely run it again!

Really sweet finishers medal that spun and was double sided!! It was specific to Pittsburgh race 🙂 Commit. Crush. Conquer! 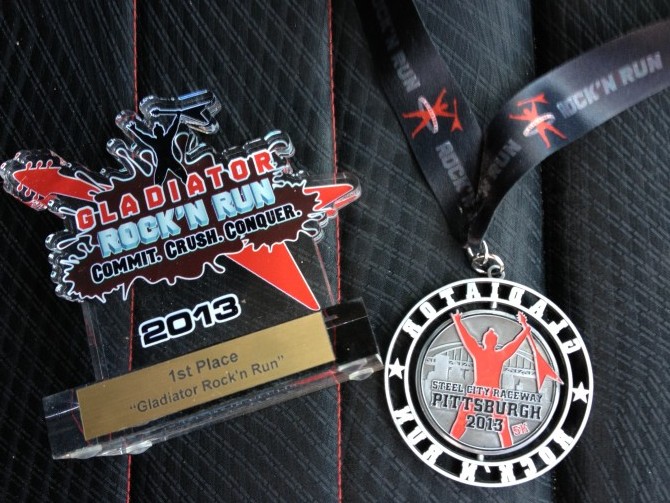 Grab the Bulls by the Horns – My Experience at the...