The Vermont championship has passed. The blogs, social media pages and website have contributed to a well written summary of the race in their own words and photos.

Over the past few days my thoughts have raced over how to contribute to this, but enlightening the community beyond the normal summary of the race itself. Without discovering these words in front of my laptop alone I went where my mind can be open minded, the trail.

At lunch I took my racing shoes (Inov-8 XTalon 190s) from the garage and headed for the trail. With my body not fully recovered from the beast my strength was not fully returned, but being back on the trail brought peace and flow. Glimpse images on this past weekend were brought back to my mind. The success and failure of each athlete on that mountain for me was summarized by three words:

As race day approached and spectators and athletes arrived the buzz in the air was different than past years and other races. My wave wasn’t until 10:15 so I made sure to arrive early to see the elite men and women start. 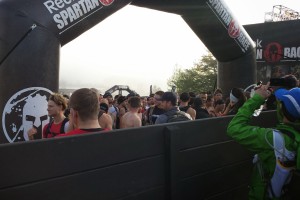 Sounds of multiple languages and accents were heard throughout. The start line had a new twist, a wall to go over prior to getting to the starting line. How were the event coordinators planning on using it? It was unknown at the time, but later discovered. Just like a heavy weight bout the announcer named off the names of key athletes: Cody, Hobie, Matt, Hunter, Amelia, Claude, April, Elise and others. As each of the names was called in their respective wave the athletes leaped over the wall and then were given a 25 yard walk to the second starting line.

The crowd grew larger than any other elite start I have witnessed. Spectators lined up farther than the start line and up the mountain. Cameras ready to cheer on their favorite athlete, family member or friend. The last words were said at the start line, “AROO, AROO, ARRO, GO!” and 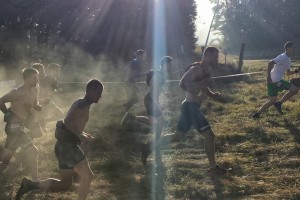 on the perfect sunny, 65 degree temperature start the athletes were off with the unknown being ahead of them.

It was not until a couple hours later did I get to experience firsthand the beast that was brought upon us.

The 10:15 start came. A mixture of excitement was present in the corral of athletes ready to embark on the mountain. The announcer surveyed the crowd on first time beast racers. About half the crowd raised their hand, including myself. It was a short survey for a known fact that the OCR sport is growing and that athletes from all kinds are coming to enjoy it!

My thoughts were mixed. I flashed back to when I started this journey to today. A road of commitment and determination brought me to where I was. At the beginning of my first sprint race in Tuxedo, New York I finished that day in not knowing what lied ahead, but the result of a stronger and healthier body was thanked.

The race was full of challenges mentally and physically. Everything the mountain had was put forth at you with its natural beauty on top of the obstacles. I can’t say how many obstacles were used during this race, but can say each one of them were built well and held up for the thousands on this course.

What could you expect from a championship race? EVERYTHING! Hay, walls, sandbags, buckets, spears, steep hills, rope, water, tunnels, barbed wire, burpees, pulls, tires and did I mention STEEP HILLS!

My tracker’s battery had gone at mile 11.41, but at that time 6,420 feet of elevation was achieved. The supposed final mileage count was around 13.2 miles, but some GPS watches said they had closer to 15-16 miles.

As we were going through some of the steep woods of Killington one racer put it best, “At the start everyone was endless chatter. Now we talk to motivate and continue to remind ourselves put one foot in front of the other until you reach the finish line”

The silence and togetherness of what this race brought was like no other. Each athlete needed to find more in themselves to continue on and finish. If you did not, you were not a finisher of this race.

The final emotion was experienced for me like no other. The sun was setting and the spectator cheers were being heard at the last sand bag obstacle. You knew you were close! You placeed your sand bag in the container and raced to the last few obstacles. As I went under the final barbed wire, wall and fire the impact of the gladiators meant nothing! I finished! I was greeted with the medal 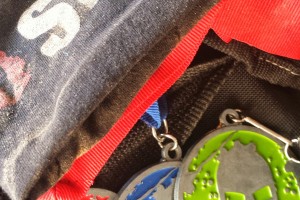 I did not know I was striving for a couple of years ago, but knew that once it was put on my neck that the emotion I experienced at the start of the race concluded in a thrilling finish!

The final chapter of the start of where I began can now be concluded, but a new chapter has begun!

I want to thank everyone that brought me to this stage and its future. The spectators and athletes by your side at the race have MUCH MORE POWER than they might know. They are the fuel to our strength. We will continue on!

On the Road to a Triple Trifecta