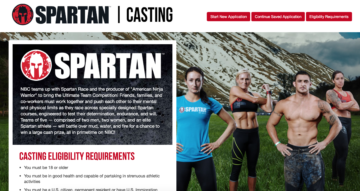 Spartan: Ultimate Team Challenge is coming back for a second season, and they are taking casting applications until February 15th, 2017.

Several former participants have gotten calls from the production company urging them to get teams ready. All of this prior to the website link going live. While no official announcement has been made from Spartan Race or NBC regarding the return of Spartan: Ultimate Team Challenge with casting currently open, it seems that the show has been picked up for a second season. For obstacle racing fans this looks like good news with more obstacle racing on major broadcast television in 2017.

CW Series “The Challenge Within” Trailer | Why Tough Mudder

Are We Ready for Catastrophic Success of WTM?