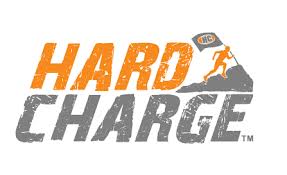 Manning, Lebron and Woods – all awesome athletes who provide great TV entertainment. Most of us realize we’ll never be talented enough to play their respective sports well enough to be on TV, but that doesn’t stop us from picking up a golf club, shooting hoops or throwing the pig skin around the yard.

But televised sports are changing and sports nets have introduced new events that don’t necessarily feature athletes making millions of dollars per year. American Ninja Warrior, CrossFit Games, and now HARD CHARGE are all examples of shows that feature the weekend warriors and not just the elite few.

Why the surge of popularity for these sports? My opinion: Americans love to compete. We’re bored with sitting in a cubicle, staring at a computer screen all day while our bodies gradually get weaker. We’re looking for physical outlets to revive our bodies and playful spirits that have sat dormant since grade school. For me personally, it’s reasons like those that lead me to try my first obstacle course race (OCR) back in 2011.

OCR has really boomed throughout the last few years. It’s the fastest-growing sport in fitness, attracting millions of participants. It doesn’t involve buying a bunch of equipment or devoting years of your life to training. People of all ages and fitness abilities come together to run, jump, climb and get dirty. Things most of us haven’t done since we were kids. OCRs are inspiring and enriching events that everyone can do.

Like any sport, a few go beyond the casual participant level. Some are exceptional at it. Athletes you may have never heard of like Hobie Call and Nic Zahasky  to Margaret Schlachter and Amelia Boone. Even Team Mud and Adventure athletes, LeEarl Rugland and Juliana Sproles.  These athletes build walls in their backyards to perfect their technique. They forgo typical weight machines in the gym to train with tractor tires, sand bags and rope. They are not just fast but incredibly strong. And their display of strength and endurance – combined with the occasional wipeout – makes for compelling TV. So much that HARD CHARGE, the first televised OCR series, is getting picked up by TV networks like Comcast SportsNet and Fox Sports nets all over the country, and is now available in more than 50 million homes in the U.S. and Middle East.

The athletes on HARD CHARGE are truly inspiring. Many people will never be able to run a sub 6-minute mile or carry a 40-pound sandbag up a mountain – hell, I’m the first to admit I couldn’t. But we all thirst for inspiration to get to the gym. We all have personal obstacles to overcome, physical as well as mental. We’re so used to telling ourselves what we can’t do that when we do something so simple like climb over a 4-foot wall, it sends a shot of accomplishment through our bodies and awakens a part of life we haven’t felt in years. This is all good and it’s something everyone should experience at least once a year.

Most people don’t come to HARD CHARGE to be on TV. In fact, 80% of participants run the untimed and untelevised CHARGE for Fun heats. But that doesn’t mean they’re not motivated by Call and Schlachter, or Rugland and Boone. Much like Tiger has motivated millions to hit the links, these athletes are motivating thousands to hit the mud.

Now that the sport of OCR has a TV outlet, even more people will realize its beauty. One that changes lives, gets people off the couch and into the gym. And one that brings weekend warriors out of the woodwork to compete on national television. I invite you to be among them, and hope to see you out on a HARD CHARGE course next year!

And the Largest OCR Team is…