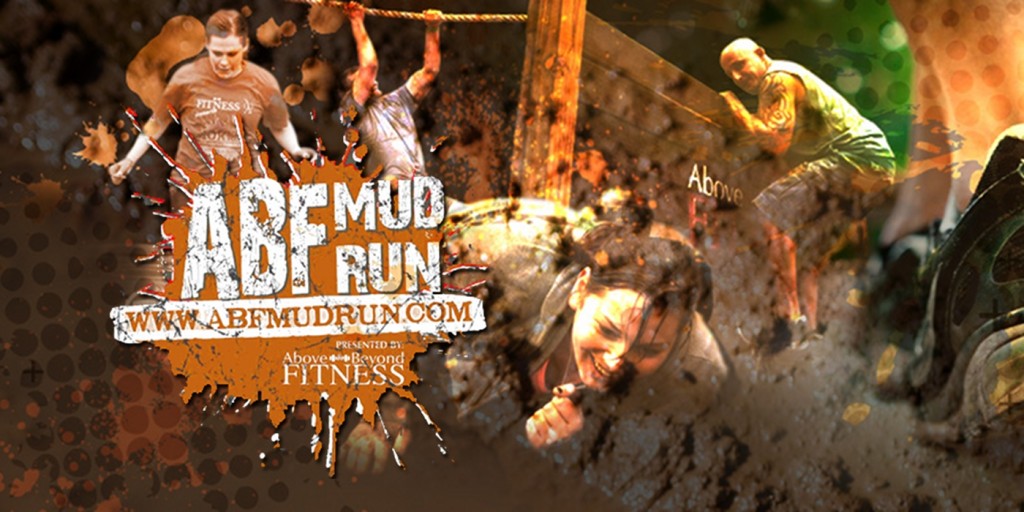 Those of you who know me personally or follow me here on Mud and Adventure or any blog for that matter, knows what I am about. I said it before and I will say it again, ABF Mud Run is a must do racing event in your annual OCR calendar.

OCRs have evolved so rapidly that elite athletes like myself, in the industry are now searching beyond a now corporate involved business and looking elsewhere for races that still hold onto or maintain the true identity of obstacle course racing at it’s finest. Chad Mason, founder of ABF, race director and one of the designers still holds onto the vision of what a true OCR should be. He gets involved with every facet and decision making process in his event, meanwhile, still listens to feedback, personally responds to emails and this past Saturday, April 26th in Pemberton, NJ, I personally witnessed him jump in a thigh-high pool of very cold muddy water to help a man get over an 8ft wall, but this article is not about Chad, well as a person that is, because that speaks for itself. This is however, about his event, the ABF Mud Run which I just ran in for the 3rd year straight.

This was a new location and like ABF’s other locations, this was a stationary course so I already knew that the obstacles were legit. Although this is considered a local event, this is in no way a run-of-the-mill OCR, and even with less to work with this year, Chad found a way to out-do himself and managed to pack 25 obstacles in a 2.3 mile race, making it and obstacle course junkie’s dream course. 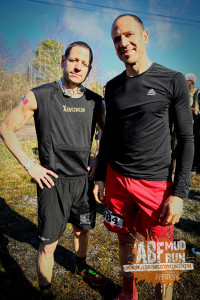 It was cold that morning and I knew that ABF has a minimum of 3 water crossings, so it was safe to assume that there was a challenge ahead. I ran in the new elite wave, which did attract quite a few elite OCR athletes, including my brother Stephen Vassallo who is the one who originally introduced me to ABF. With him running beside me and the fact that he has a few years on me on the younger side, my performance level had to be top notch and I had to be on my A-game, plus all eyes were on me that day including, Mud and Adventure, the fantastic photographer Bob Mulholland,  OCR Gear and the people of Mud Guts and Glory of the OCRWC. Top male and female finisher was to win $100 and a free entry into the OCR World Championship at Kings Domain (another permanent obstacle course), held October 25+26, 2014. 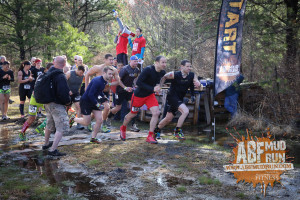 It was only about ¼ mile in before the first water crossing, which consisted of a waist high canal filled with seasoned ice cold water, fed by a nearby lake. The first was about 50 yards or more, then you exited, ran a hundred feet, climbed over and 8ft wall, (but these 8 footers come with missing planks on the bottom, so there was nothing there to kick off of to get you higher, so you had to make the jump), and then proceeded to another canal only deeper and longer in length. This happened 2 additional times, leaving more time in the water than on the ground running. Trekking through water may sound easy but try doing it quickly in all 4 canals and without stopping to thaw out after each exit. I was also told that there were some water snakes keeping us company. I saw some bubbles in the water and was uncertain of its source but that didn’t stop me, in fact it didn’t stop any of the brave and strong participants who ran that day and I got the sense that nothing would have stopped them.

After a several other low depth water crossings/small pools of muddy water, 7ft reverse walls, more 8ft walls and a telephone pole crossing, I hit Jarhead Playground/Park, which in my eyes is essentially an extreme adult playground, not meant for the sane individuals. This portion of the course took place at the back end of the race, when you are most exhausted. It consists of 10 obstacles, literally back to back with no intention of mercy, beginning with an ice bath where I had to swim through a hole in the wall submerged in the water, to a series of other grit testing obstacles, with the intention of breaking down the major muscle groups in your body and testing your mental strength. When you run for time or to win as

competitive athletes/elites do, you don’t stop to take a breather, you don’t stop to thaw out or rest until you feel fit to run again. You keep going, you push yourself and you don’t let up until you cross that finish line. Jarhead Playground gives a whole new meaning of pushing yourself to the limits. The last obstacle in this area was a the 16ft wall, which when you looked at it from where I was standing, and after running hard through the course, seemed damn near impossible. I couldn’t believe how high it was and it stood between me and the finish line. With the prize money on my mind, a 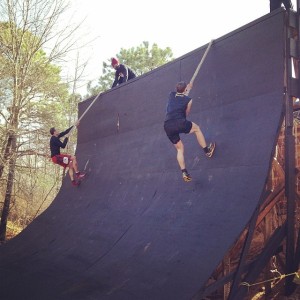 free entry in the OCRWC and my brother breathing down my neck, I knew I had to conquer that wall quickly. I am known for my strong finishes but I fell short of it with missing the rope twice when attempting to run up the wall and grab it. This gave my brother the chance to catch up. We reached the top of the wall at the same time but the volunteer helped my brother up a bit quicker, as help was needed at that very moment as we hung on to the top with our legs dangling. Stephen Vassallo prevailed the winner by a few seconds and I couldn’t be more proud of him.

A course marshal announces at the start line that hypothermia was a possibility. Well that was just a lie because in my case or any others running for time, hypothermia was a definite. This may send you running away, never wanting to try an ABF Mud Run or it may make you feel just the opposite, as it will peak your interest and you will be registering for the October 4th race in Berlin, New Jersey. I thought I knew/ had an idea of what hypothermia felt like until I ran this race and found out I didn’t know. I was ready for more after my body regained its normal state. I went back out again, only this time with a group of people, mostly first timers, with the objective to truly experience the reason why Chad had begun to teach, coach, train and create an OCR event to begin with, that is, to connect and conquer a task with a group of individuals, build camaraderie and succeed together as one unit.

I ended up with a group of people from the Philadelphia branch of the Cancer Treatment Centers of America. They were not elite athletes, but they were passionate, excited, heart driven and strong. For elite/competitive athletes, we train, compete and complete OCRs as if it were just another day in the park, but for the average person or perhaps for the group I was with, or numerous other participants, just maybe completing a course like that for the very first time, could have been a major event in their lives. For some, it will be a memory they will never forget and love talking about for years to come. I remembered the first time I completed my first OCR, and how enormous I felt, with an overwhelming sense of accomplishment. So, if I could have helped someone feel that same way that day, then that’s a better day for me. I supported people, pushed them, gave them a little extra confidence, encouragement or boost, just when they need it most. I felt like I got to experience what occurs on the other side, rather than racing for myself and only looking out for myself. It changed the way I see things, especially as I witnessed the agony, yet pure joy in people’s faces when they crossed that finish line. I won’t forget it.

Overall, the day was a complete success. I was pushed to my limits, was enthralled with the course, for I was never bored and finished 2nd overall male, just behind my brother, that bastard. I also got pretty banged up, which surprised me, being such a short course. In fact, the last time I was just as banged up, was at the Vermont Beast 2013, which is 13 miles and takes place on a 4,600ft mountain. ABF does not take place in the mountains but rest assured, your body will be battle tested. To put it in perspective, in mountain-based OCRs, I average anywhere from 12-15 minute miles. I ran on the high end of that spectrum finishing a 2.3 mile race in just under 34 minutes, making it just about a 15 min mile. The difficulty level of this event is high so I would not recommend it for the weaker, unmotivated type especially as an individual participant but as a team, I highly recommend it as I do with competitive athletes looking for some new excitement in their lives.

Mudd, Sweat but NO TEARS!!