With another end of the OCR season fast approaching, particularly in mid and northern portion of the U.S., where it is getting cold, people are trying to get in a last race or two, not only to feed the desire to push their physical boundaries but perhaps just to relieve the itch to compete/try and dominate a course.  Several of the bigger named OCR’s already finished running events in the north-eastern region, so the challenge is finding a local run event worth going to or shall I say, worth spending your money on.  The ABF Mud Run in New Jersey is a race that fulfills all of these needs and whoever you are, be it elite runner or weekend warrior, this race will 100% put you to the test and in the end, feel a great sense of accomplishment, sprinkled with a lot of FUN.

Above all, what makes ABF Mud Run a race worth signing up for is that it’s is a non-profit OCR and all of the proceeds are donated to 2 separate charities: YMCA and Wish Upon A Hero.  It was started by Chad Mason in 2011 with only friends and locals attending and now this year, October 5, 2013 in Medford, N.J., it had about 800 participants.  He is a peoples person and gets hands-on involved with every asset of the event.  Expressing with sincerity and a genuine tone, Mason let me know that he puts everything he has into this event and he is never disappointed with the results.  He truly does it all which makes him quite busy and quite popular and Mud and Adventure was there to help him out.

“My goal is to not only raise money for charity but to bring people closer together and work as a team.  I understand that some participants run solo, which is why I added the telephone pole carry.  It helps to create teamwork, because you have to wait for and work with other people to complete the obstacle.  It also forms camaraderie and

friendship, says Mason.  This is not a competitive race by any means but certainly meets the criteria of one with a 10K option available and very challenging obstacles, especially for the budget.  He adds with passion and a smile on his face, “I take my own earnings from my gym to put into this race.  Sometimes the money we raise from registrations alone is not enough to build all the course but we want to make sure people come back and we get better after each event.”

There were quite a few obstacles that are exclusive to ABF Mud Run, most in which will not be disclosed due the element of surprise that the race wishes to continue to install, however, having run both the 10K, then the 5K that day, in my raw opinion, which I will rarely give for these types of articles, there is 1 obstacle that I wished was in every single race that I attend, and it was the 13ft wall.  Now I won’t spoil the whole surprise, but let me just say someone like me who is fast, strong, elusive and particularly agile failed it twice in the 10K, completing on third attempt and then in the 5K, completed it on the second attempt.   All that may have been different if I ran the first wave like I was supposed to but after driving around for an hour trying to find the venue, I started later and the obstacle was soiled and wet, so I had to improvise.  It would be considered amongst fierce competitors and average runners alike a high failure rate obstacle, that’s of course if you were limited in the attempts.  Most runners from what I saw needed numerous attempts or just couldn’t complete it.  Good thing that burpees were not mandatory after failing.

If there is any question on the efficiency of the course and whether or not you are safe out there, then let this ease your mind.  Before the 2 min bus ride to the location, a course representative comes on and fills you in on what to expect, meaning course marking, volunteer participation and medic presence and like any other OCR, an injury/death waiver must be signed.  The budget is low but the accommodation is high.  The staff is friendly and personable and the volunteers are knowledgeable, helpful and everywhere you need them to be.  The course was marked well and the obstacles were sturdy, in addition, there was plenty of mud and ABF brings a new twist on some of the water crossings because some spots appeared to be more like a swamp rather than a lake, which is a fear you must overcome to complete it.

Overall, besides the physical challenge aspect of ABF Mud Run, it is a course designed for you to have fun, basically by building an adult playground, with a lot of big climbs, big jumps, slides and carries.  If you are able to successfully complete the obstacle or not, you are sure to have a great time and afterwards, enjoy the festival 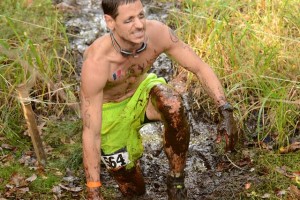 area, where you can listen to a live band and see vendors like OCR Gear and Sneaky Pete’s OAT Beverage.  Mason, who is better known as and prefers to be called ‘Chad’ urges you to come out and run for a cause and register today.

By Charles A Vassallo