This past racing season was a year of growth.  Above all, I learned that it’s ok to be afraid, and to use that fear to motivate me to overcome many obstacles in life, race-related or otherwise.

I completed my first ever Spartan races in 2012, starting in the Open to get my grounding (racing pretty hard before I found out I might be able to hack it in an Elite wave!).  I was hooked from my very first one, and couldn’t wait for more – weird, since prior to that race, getting muddy was probably the worst thing in the world to me.  Halfway through this season, I began racing Elite, and placing pretty well.  Burpee runs, sprint work, and hill training all made their way into my everyday life.  When I first heard the description of the Ultra Beast back in February, I shook my head and laughed thinking, “Who on EARTH would want to run that?”  In August 2012, I applied for a spot.

On Friday, September 21st, 2012, I arrived at Killington. After meeting up with some very close race friends, we all settled into our log cabin near the start of the race.  Of the twenty or so we had gathered in the house, only five of us were daring enough to attempt the Ultra Beast. Setting our own personal goals of eight hours, seven hours, etc, we all jokingly challenged each other to the race of a lifetime.  Those athletes who had met this mountain before were sharing stories of its height, cold temperatures, and Spartan’s ferocious Beast course. With fear and excitement bubbling over, we all tried to go to sleep.

September 22nd, 2012. Race day is here.  We woke up so early (if we ever really slept at all), packing our hydration packs, midway boxes, and donned our gear.  We headed over to the mountain, all psyched up in the cold, and got ready to compete.  My sister was there to cheer me on and watch me start the race.  I needed her there, she helped calm me down and get me ready for a badass race.  Elite racer Jon Liro and I immediately teamed up in the starting corral, promising not the leave the other behind.   AROO! AROO! AROO! and we were off…

The first half went pretty smoothly.  Mile ~4 we were back down in the festival area, watching friends start their Beast race, getting some love from the volunteers and spectators who all knew we were crazy.  Jon kept me moving so hypothermia didn’t set in after the water obstacles. He kept me sane. and alive.  We hadn’t yet realized that our eight hour mark was unattainable.  Sprinting down off the mountain into the midway point corral to eat and change into warm, dry clothes, I saw my parents.  Boy, was I happy to see them!  Miles 10-14 I couldn’t wait to see them, hug them, and get a much needed boost from them.  I went through each grueling obstacle in detail with them, letting them know the terrain and course that I was up against.  Never doubting me, they sent me on my way with a warm hug and kiss.

Off for round two, Jon and I met up with Elite racers Freddy Rodriguez and Jeff Rondina.  My UB pack.  I needed them. We all needed each other.  ~18 mile mark and we were back down at the festival area again, rope climb, traverse wall, spear throw.  My arms were tired. I was cold. I wanted to give up. Freddy, Jeff and Jon didn’t let me. Screaming my name, letting me know I could do it, I climbed the rope. One knot from the top, I couldn’t pull anymore. I’m terrified of heights and the rope was too wet and I couldn’t grab it. I went to hit the bell, and fell. Only time I have ever missed that obstacle. A scream, a fall into too-shallow water, and thirty burpees later, I swallowed my pride, left that obstacle in the dust, and continued.

Here we were, the last couple miles until the end. 11 hours later.  We could all hear the festival area, we knew the course, and we knew the end was close.  Pushing our wet, hypothermic, dehydrated bodies to their breaking point, we called out rocks and branches as we ran single file through the woods.  We all have our mantras.  “& Though she be but little, she is fierce” has always been mine. This time, however, I kept repeating to myself that my parents were at the end.  We hadn’t planned for them to be there, but I was wishing and hoping that they stayed. 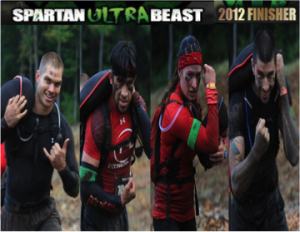 “We did it!” We wanted to collapse at the end of that race, but we made it. Thankfully there were some amazing people at the end of the race who captured it all on film; Elite Athlete Amanda Ricciardi caught some photos of us fighting Killington’s trail as she fought through the UB as well. At the end, Jon, Jeff, Freddy and I has no words as we hugged each other, patted each other’s backs, and just took in the experience.  I still thank my three amigos, Freddy, Jeff, and Jon, for all of their hard work and determination, and their support, throughout this race. Couldn’t have done it without them. This experience helped me grow mentally, physically, and as an Elite athlete.  I never thought I would compete in that race, let alone finish with in the strict time hacks they set.  But walking away from this challenge, I now see just how afraid I was of water obstacles, nervous about hypothermia in cold races, and petrified of the rope climb.

It wasn’t too long before I was back in action, winning the Elite Fenway Spartan Time Trial, kicking butt in Third Place at the Texas Beast, and became a newfound Spartan athlete.  Fighting injuries and weaning my body back to health was a constant.  And I was still scared of all those obstacles, and above all, Killington.  The summer came and went, and Spartan announced that Elite athletes had to complete in the Killington Beast for their points to be counted.  Nemesis #1. Killington Beast.  and this time, Norm Koch was the RD. Sharing a hotel room with Elites Ryan Trott and Tonya Stogsdill, we compared stories from 2012.  Obstacles. Temperatures. The works.  We were psyching each other out and didn’t even mean to.  Another night of rest, and it was Race Day Spartan Beast, Round Two.

Saturday, September 21st, 2013.  Race Day Spartan Beast, Killington VT.  Warmed up, entered the corral, and took off on my journey.  My fears all came rushing back during the first “hill” we had to climb.  I met up with Ryan and just started on our Beast journey full force. Obstacle after obstacle, my injuries were slowly coming back and it was hard to keep my fears aside.  Aced the rope climb. Ran up hills.  Survived the mile long sand bag carry – I was doing better than last year.  And then it dawned on me… just competing in this race was a big step for me.  I started crying when I got to the lake.  Swimming across that thing was horrifying last year, and I remember shaking for miles after, fighting back hypothermia and refusing to quit.  Ryan dove in and I followed, confident that I could complete the obstacles.  Climbing the ropes, wiggling under the barbed wire crawls, swimming… these obstacles kicked my butt last year and I was terrified to repeat them.

I finished the 2013 Spartan Beast Championship in just about six hours, with Ryan by my side. I won. I beat the “me” from this course last year. I didn’t let the mind blocks defeat me.  I didn’t realize how terrified of this course, this mountain, I had become since last year.  As much as I had grown from the Ultra Beast experience, I had also let it defeat me in some ways.  But not anymore. 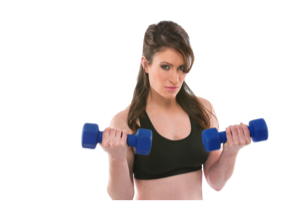 Spartan Beast Championships 2013 showed me just how much I had grown as an athlete both mentally and physically. It showed me how supportive my racing family really is.  Freddy R, Jeff R, Jon L, Spartan Staff, Solo, Kevin D, James M, Gino, Amanda R, Crystal F, my Mom and Dad, my Sister, and Ryan T  – and every athlete who has been on course with me and encouraged me to push through the pain and the challenges has helped me to define “me,” and for that, I thank you all.