The Mud Run, June 1st, 2014 This race was located at the Claireville Conservation area in Brampton, Ontario, Canada.

The race itself is a 5KM trek looping through woods and fields and back to the main event area. This race is for those who like to run.  It weaves through a variety of terrains but the obstacles are few and far between. Racers kept asking whether the fallen trees were obstacles or just the trail itself.

The wooded section was the best part with hill climbs, ropes, mud pits and some over unders.   Water stations were available and none of the obstacles were overwhelming.

First aid was available at the race finish line but there were no food vendors and only a Merrell tent and one charitable organization tent.

A photographer was on site to take pre/post-race photos and the final mud pit was quite a show. 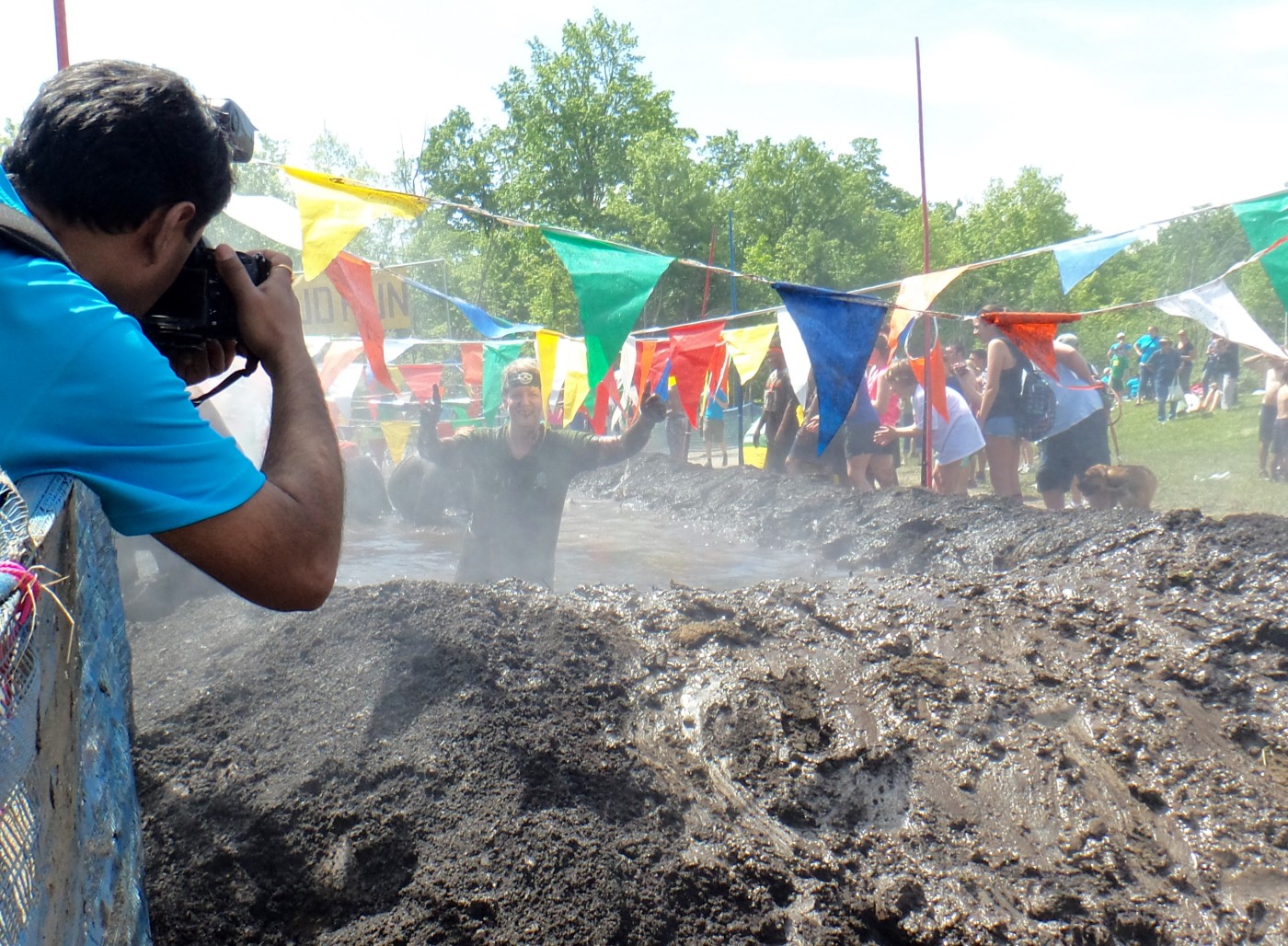 Water and bananas were offered at the end of the race, but no medal for this event.

Registration was quick but bag check and parking were at an extra cost and most people had to check a bag as parking was a bus ride away.

This venue offered a kids race at the end, however this race then delayed the bus transport and racers were left to walk back to their cars as the buses were held back due to racers along the dirt road.

Basic showers were offered as were tented change areas, however, the line-ups were huge and people were lounging in the showers while others waited in line.  Some showers had no pressure so were limited as to what they would actually wash off your body.

Good volunteers around the main areas and the event only had a few heats (teams, individuals and kids) so it was over at a reasonable time.

Post-race there was no entertainment and the drive out of the park involved a very long dirt/gravel road to take you back to the main highway.  People were getting upset about bottoming out their vehicles as they were exiting this event.  We had to postpone this event from last year (2013) and the organizers did a great job carrying forward our entry fee for this year’s event.  We had great expectations for this event but were disappointed.  Overall, it felt more like a running race and less an obstacle race.  An average location that was able to handle the crowds but the parking is far away and relegates people to limited access to their vehicles and a reliance on the buses schedule as the laneway can only accommodate one vehicle at a time.  The shirts are a nice tech material but no other SWAG was offered.  We asked for extra water and they said they were all accounted for and they could not give/sell us another one.

Tips: no gloves required, wear tech shirt, hat and sunscreen as the course is hot and sunny, no long socks required and shorts are preferred as the mud is quite heavy at the end.  Bring extra water, towels and sunscreen. Pack your go bag with all accessories you need to bag check to avoid having to bus back and forth to your vehicle.  Carpool and drop one person off to pick up kits prior to parking your vehicle to save time.  Use hoses by the permanent washrooms near race kit pick up to avoid line-ups.  Walk back to parking to save time.

Feedback for race: More signage required along major routes.  It was good to receive the specific map directions which helped to narrow down the access point off of Steeles Avenue.  Add more obstacles if you truly want to be considered an “obstacle” race.  Add more shower stations or have volunteers limit time in showers.  Add a medal to the event.  Extend vendor area and have prizes for best costume etc…to increase interest in the event.

Hotel: We stayed at the Best Western in Hamilton and drove to the race the next morning. Buffet breakfast is included in the room cost.  This hotel is somewhat dated and the main floor rooms have a stale smell and open onto the back parking areas.  Fresh paint has been applied but there is still a post-smoker’s room odour when you enter the room and the Internet was very slow.  Located near a few outlet malls it is convenient to get to most food and shopping locations.  We were about 20 minutes from the race location but there was some confusion as to what entrance to use to gain access to the race.

Overall the race was a 1/5 based on level of difficulty, location, organization and cost for serious racers.  If you are looking for a family-friendly event, then this one should be considered as the final mud pit was fantastic for kids to romp through.

Judgement Day BMF Team Challenge – Putting The Fun Back Into...