When the folks at Obstacle Race Magazine asked me to check out and report on the Monkey Bar Gym class offered at Epic Hybrid Training Center in Mid-Town Manhattan I said hell yeah! I’m part monkey (more monkey than not – to those that know me well ). I’m not going to lie, I pictured a big cavernous space filled with various rings and monkey bars hanging from different levels off the ceiling hidden in my very own backyard here in Manhattan.

When I arrived at the humble one room space on the second floor of EPICS’ East 53rd Street space, I was reminded of how grandioze my imagination can sometimes be.  A Muay Thai class was wrapping up in the mat room and I met up with Alex Nicholas who would be leading the Monkey Bar Gym training session I would be sitting in on. EPIC’s site claims it’s Monkey Bar Gym training teaches and trains the four, basic functional fitness skills: running, jumping, crawling and climbing.

Alex and I chatted a bit about obstacle racing. Turns out we both had run the Spartan Race Time Trials at Fenway Park in Boston a few weeks earlier.  He said he won the event and that he really doesn’t run much. He just does training like the Monkey Bar Gym class I was about to experience.   Alex is a BIG (muscular) dude. Honestly, I thought he was either blowing smoke up my butt or was somehow just mistaken, i.e. won his particular heat or age division.  A later, purely hetero, man stalk online and I stood corrected. Dude won the thing. Fastest time, all day, all weekend. 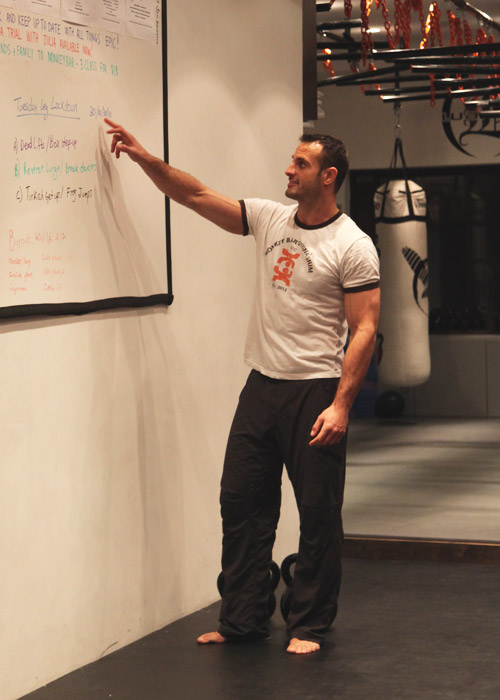 Alex started off the class with writing the exercises we were to perform that day on the white board.  We were to do a circuit of exercises, focusing on hitting the legs and lower back. While I wasn’t going to be swinging from the rafters like I had first assumed, I was happy to see the plan of attack. I was looking for   a training program that wasn’t CrossFit – the idea of snatching weighted bars in unison just doesn’t do it for me (scared my head might just roll off my once broken neck). Plus those rocking things CrossFitters do – they aren’t pull-ups (let the comments begin). 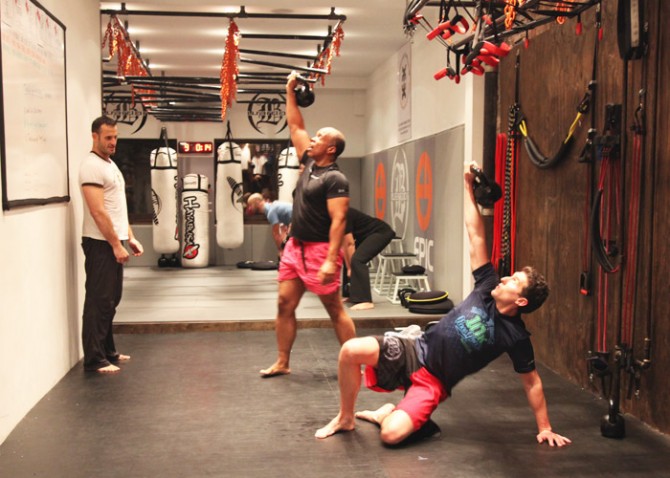 A brief yoga stretch and we got going. Except for the Turkish getups, where I very awkwardly raised a wimpy weight kettle bell, I thought everything was straight forward and not too challenging (meaning I should have left more on the mat room).  A short hour later and we were done and I was pumped up and actually in the mood to work out. For the next three days I was made aware of how under trained my lower back is (I am very proud of my 61 rep pull-up record PR ).  Whew-ee. I though had injured my lower back but in actuality I had just kicked some sleeping muscles’ asses.  My next day’s run despite the stiffness in my lower back was exceptionally hard and fast. Perhaps there was some truth to Alex’s method – which is great because I only run to train for obstacle races. If I find a training program where I actually run less?! … 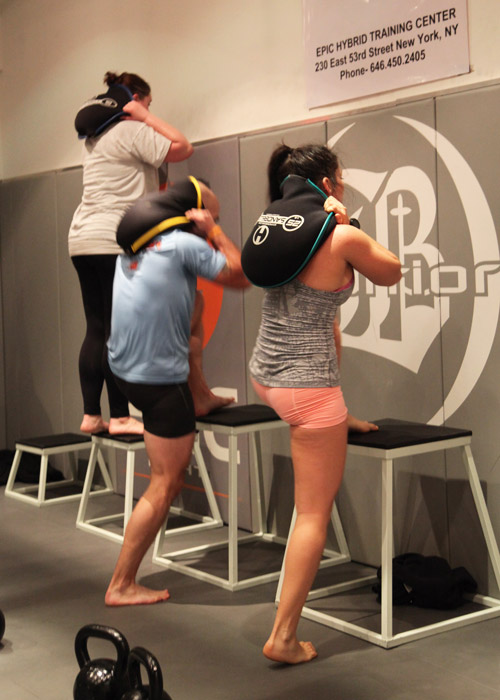 Tired of working out on my own and looking for some group motivation but wanting to avoid CrossFit and a boring gym membership, I may have to check out some more Monkey Bar Gym classes and see which other muscles I’ve been neglecting.  Plus there’s Muay Thai (which I’ve been wanting to take) and other MMA classes at the same gym. I may very well have found a new indoor training home. 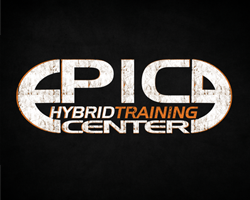 still the wrong way. those girls are strong!!

Fuego y Agua Survival Run – A true once in a...